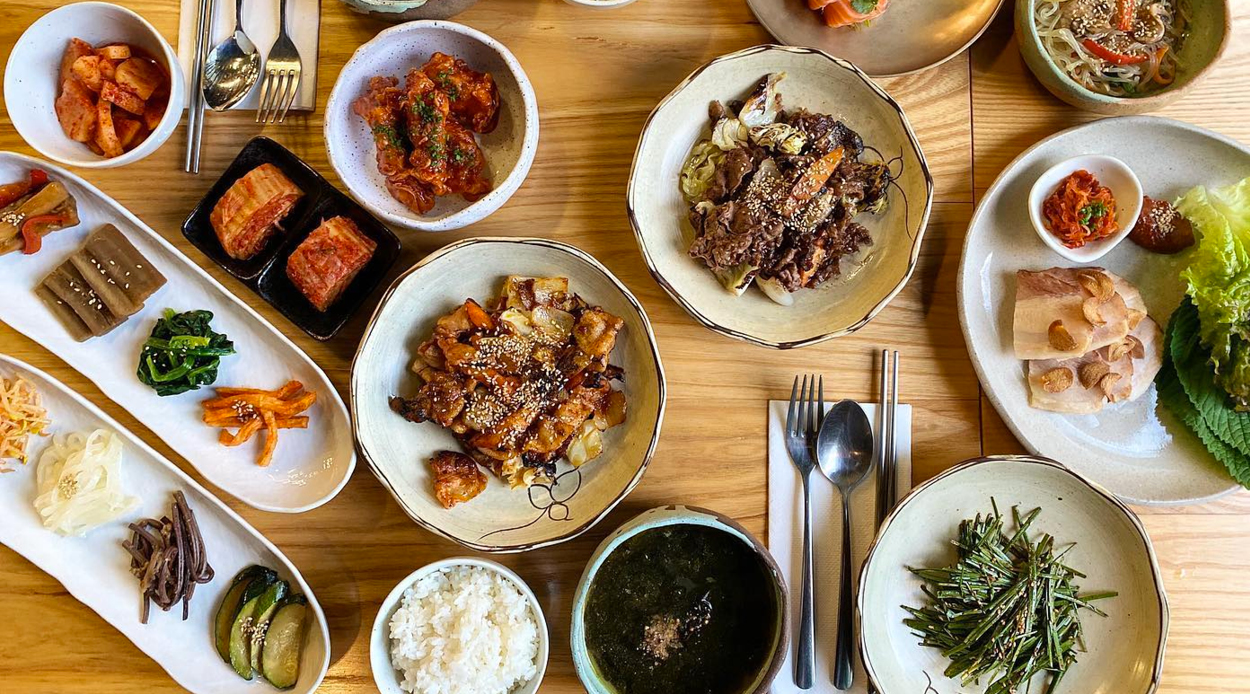 You may have sampled your fair share of Korean fried chicken and bibimbap but what about tteokbokki and sundaeguk? In Auckland we are lucky enough to be spoilt with an excellent range of Korean eateries, serving up time-honoured and contemporary dishes alike. From the truly authentic to modern interpretations, these are the best Korean restaurants in town.

The Place — Takapuna
If you’re in search of authenticity, look no further than The Place in Takapuna. This restaurant has it all, from classic Korean fried chicken to more adventurous dishes like pork back-bone potato soup (a very common delicacy in South Korea). The Place is a go-to spot for Korean families as the wholesome and hearty dishes accurately reflect what one might find on the streets of Seoul. We suggest you gather some friends, go in a group and order the gul bossam. Enough to feed at least four, it consists of a large platter of pork belly, lettuce wraps, spicy kimchi and comes with fresh oyster salad.

Gochu — Commercial Bay
Despite being a relatively new addition to Auckland’s dining scene, Gochu has already carved out a solid reputation for serving some of the tastiest fare in town. More contemporary than traditional, with cuisine described as ‘New Korean’, Gochu offers the perfect dining experience for both seasoned fans of Korean flavour and novices looking to whet their appetite. The pork XO noodles are excellent, as is its famous Jason’s fried chicken (which packs a serious spice punch) and its pillowy soft milk bun filled with spicy pork and kimchi. With hospitality pro David Lee at the helm (along with long-time collaborator Oliver Simon), it’s no surprise this newcomer has become a firm favourite.

Tae Neung — Albany
Don’t be taken aback by the location of this restaurant — Tae Neung is the real deal. Tucked away next to the Albany Rosedale Motel, this is without a doubt one of Auckland’s best Korean BBQ restaurants, even people from the other side of town venture over just to satisfy their Korean cuisine cravings. The menu offers a range of different cuts of meat, but it’s the fresh beef short ribs and marinated beef short ribs you need to go for. End your feast with the mulnaengmyun, a cold buckwheat noodle dish that is unbelievably refreshing and cleansing on the palate.

Ockhee — Ponsonby
Described as putting the ‘Soul from Seoul into Ponsonby’, Ockhee has injected plenty of flavour into Auckland’s most popular strip since it opened in 2020. Owners Paulee and Lisa Lee have taken authentic Korean food and added familiar Kiwi-style elements to create fresh, harmonious plates. With a menu that boasts as many thoughtful vegetarian options as it does meat dishes, Ockhee’s Japchae Noodle is a must-try. Comprising of kumara noodles, capsicum, carrot, mushroom, onion and sesame oil, it’s the dressing that packs a punch of fresh, authentic flavour.

Totoya — Rosedale
Side dishes are a huge component of a traditional Korean meal, and Totoya in Rosedale pays as much attention to the sides as it does to the mains. Your table at Totoya is guaranteed to end up covered in small plates of seasonal vegetables and rice, and don’t hesitate to ask for refills as that’s what you’re supposed to do. When it comes to the mains, the braised spicy seafood dish cannot be beaten — it features octopus, squid, crab and an array of shellfish, all marinated in a divine spicy sauce.

Simon & Lee — Parnell
Nestled amongst avocado on toast and eggs benedict, you’ll find modern Korean food at its most creative at all-day eatery Simon & Lee. The menu showcases classic Korean ingredients and cooking techniques in a clever, approachable and undeniably delicious way. Favourites include the bulgogi spaghetti with grilled beef, shiitake mushrooms and a glistening egg yolk, along with any of the dolsot dishes (served in a sizzling stone pot). The fried chicken is a signature for a reason, with flavours like wasabi soy and danger spicy to pique your palate.

Teolbo — CBD
Soups and stews are probably the most prevalent dishes in Korean cuisine, even more so than fried chicken and BBQ meats. The soups at Teolbo go beyond the regular. Think hearty lamb, whole chicken with ginseng and arguably the most popular, blood sausage soup. Also known as ‘sundaeguk,’ this soup comprises a deep bone broth, with sausages filled with glass noodles and served with pork offal and offcuts.

Red Pig — CBD
Another hotspot for Korean BBQ is Red Pig in the CBD. Staying true to its name, this restaurant specialises in cuts of pork. With charcoal grills on each table, a smoky aroma is infused into every succulent slice of pork and works to cut through the meat’s richness. Although the frozen cuts are available (and cheaper), always go for the fresh ones as the flavours are more vibrant and the overall experience will be more enjoyable. Other cuts you could try are the neck, jowl and even the intestines if you’re wanting to take yourself out of your comfort zone.

Jami — Wairau Valley
Offering a slightly more refined yet very authentic Korean dining experience is Jami in Wairau Valley. From the presentation of the dishes to the ambience of the restaurant, Jami proves that Korean cuisine isn’t limited to cheap prices and cheerful environments. Jami is also one of the rare restaurants in town that serves ganjang saewoo, which translates to raw prawns. This may sound odd to some, but if you’re a seafood fanatic, you can’t go past this one. The raw prawns boast plump textures and have been soaked in sweet soy sauce to cut through the ocean flavour.

Kaya — CBD & Rosedale
Located in both the CBD and on the North Shore, Kaya is one of the more accessible Korean restaurants in Auckland. The restaurant is open for lunch and dinner, each service boasting its own entirely unique experience. If you’re wanting to go for a quick meal, stick to the lunch hours as dinner at Kaya is a party and a half, especially on the weekend. It’s where people gather for drinks before the big night ahead and the pork hock, otherwise known as jok bal, never goes amiss. We recommend the half and half of the original and the spicy marinade, so you can alternate between the two and get a range of flavours.

Pocha — CBD
Although Kaya is great in its own right, when it comes to a fun-filled Korean dining experience, Pocha is our favourite place to go for a spot of soju on the weekend. Soju is the number one Korean alcoholic beverage and we are warning you — this stuff is strong. As food is mandatory when drinking soju, Pocha’s menu features the best of Korean ‘pub grub’. From almond cornflake fried chicken to tteokbokki (rice cakes in spicy sauce with melted cheese), everything that comes out of Pocha’s kitchen is guaranteed to impress.