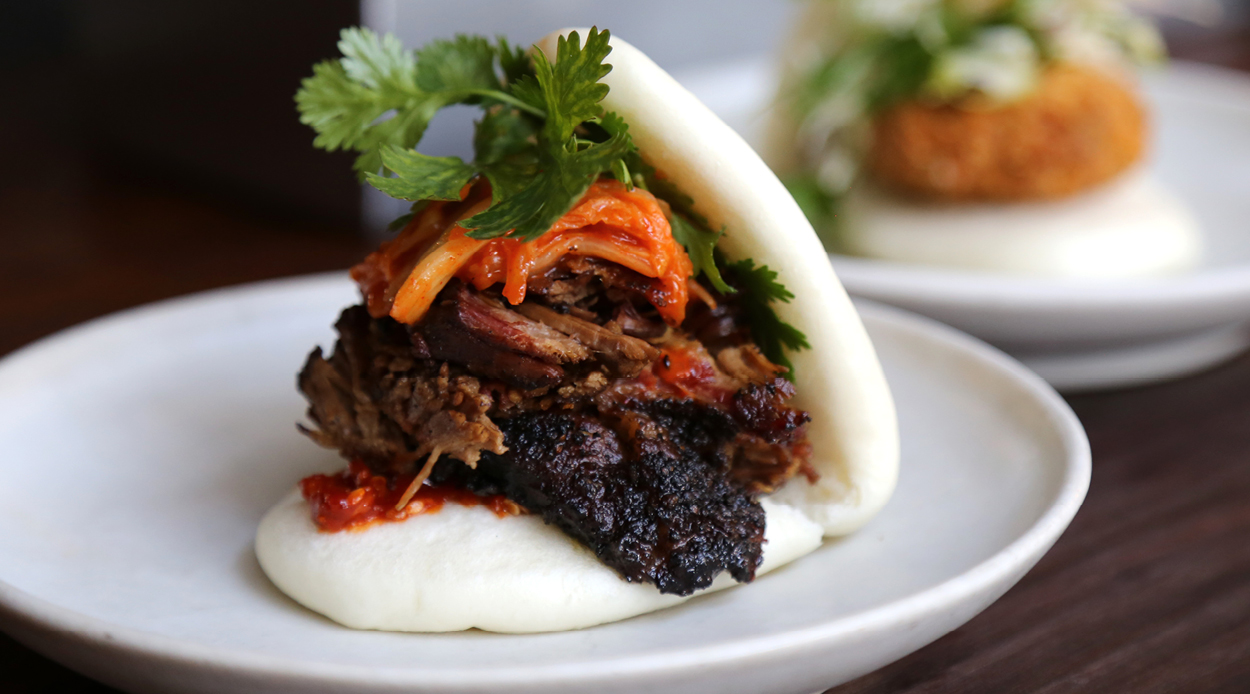 The traditional Chinese bao, otherwise known as ‘baozi’ has been a prevalent delicacy in Northern Chinese cuisine for centuries. After a New York chef named David Chang shared his iconic pork slit bao at his restaurant Momofuku, baos have turned into a staple at almost every Asian-fusion eatery. But it’s only fairly recently that Auckland has jumped onto the delicious pillowy buns, adding their own modern spin to the morsels. For those looking to try the bao on home soil, here is where to get the best.

Chicken katsu bao from Azabu Auckland Fish Markets
Ponsonby’s second outpost in Wynyard Quarter’s Auckland Fish Markets, Azabu AFM is one of our favourite places to spend our lunch breaks or go for a relaxed dinner. Although the menu is filled with tasty dishes, it’s the baos that are particularly delicious and have us returning for more. The chicken katsu bao is especially one to be noted, as the katsu boasts a light and gentle crisp which blends in with the pillowy soft bun and the addition of aji mayo sauce gives the bun an extra element of indulgence.

Beef cheek gua bao from Hello Beasty
The bao from Hello Beasty might not look like the most decadent but it’s packed with unique flavours and it’s one of our favourite baos in town. The fried croquette in the centre boasts a golden crisp while the beef cheek is tender and melts in the mouth. What differentiates this bao from the rest is the beetroot lime sauce which has a zest and zing rather than a sweetness which most baos tend to lean towards. The pickled cucumber also adds to the tanginess to the overall flavour and as these are quite light, they are unbelievably moreish.

Pork belly bao from The Blue Breeze Inn
If you didn’t have a pork belly bao when dining at The Blue Breeze Inn, you may as well say that you didn’t dine there at all. These are an absolute must, they have never been taken off the menu and probably never will for very good reasons. The bao itself is unbelievably plushie and soft like a cloud, but we think the star is the filling. A thick cut of pork belly with crunchy crackling is sandwiched between the bao along with a slather of hoisin sauce, pickled vegetables and coriander, you really can never go wrong with these.

Pulled pork bao fromThe Rolling Pin
For those that want a bao that is stuffed to the brim and can barely shut, The Rolling Pin is where you need to go. Back when they were only a food truck, dumplings were the signature dish, however, the bao specials that occasionally popped up would sell out every single time. Now, in the new permanent space located in Wynyard Quarter, The Rolling Pin has put two types of baos on the menu and the pulled pork one cannot be beaten. The juicy and saucy pork is elevated by the apple slaw and the thick slather of chilli mayo makes it ooze with sauce following each bite.

Smoked brisket bao from Chop Chop Noodle House
Right around the corner from The Blue Breeze Inn is its little sister restaurant, Chop Chop Noodle House. Although these two eateries are closely related, Chop Chop most definitely has its own unique and exclusive dishes, one of them being the smoked brisket bao. The tender beef is paired with slivers of kimchi and special Korean-inspired hot ‘ssam’ sauce which is a mix of soybean paste and red pepper paste, creating a distinct flavour that resonates with a spicy miso.

Signature slow-cooked pork belly bao fromHot Hot Asian Eatery
Sandringham Road is renowned for its delicious Indian fare, but Hot Hot Asian Eatery is also worth noting as this restaurant serves some of the tastiest Asian-fusion dishes in town. The signature slow-cooked pork belly bao arguably boasts the most tender and succulent meat out of the baos that are mentioned in this round-up. The pork is paired with spicy sriracha and creamy mayo, making the pork saucy and seep through the pillowy soft buns. The addition of crushed peanuts adds a heavenly crunch, a slight milkiness and a nutty aroma, acting as the cherry on top to the bao.

Pork buns from Sunny Town
This restaurant is much more traditional when it comes to baos, reminding us that basic done right is sometimes the best. Sunny Town’s pork baos do not have a slit in the middle, and instead, showcase the traditional shape and form of the bao. The buns encase a generous amount of slightly sweet and saucy diced pork, which steams all over your face when you tear the bun open. The ratio to pork and bun is spot on at this establishment and ensures that each bite includes a little bit of both components.

Organic tofu buns fromJanken
This Herne Bay gem is always filled with customers no matter what day it is, and everyone raves about the steamed buns. Although Janken is not a Chinese restaurant, baos have also been a part of Japanese cuisine for as long as we can remember. You might think that these ones have the potential to be quite dry as the bao is thicker in comparison to the filling, but the softness of the bao makes the overall dish so light, that it ends up balancing the ratios. Be sure to get the tofu filling, as the thick slab of tofu is glazed with miso dressing, lending the bao an umami flavour.

Steamed bun sliders from The Candy Shop
As much as we love baos, the size of them can get a tad overwhelming, but not at The Candy Shop. The steamed bun sliders come in the perfect snack-size portions and act as the ideal starter to any meal. Our favourites are the fish or the beef cheek as they are both doused in a generous amount of sauce to keep the bun from going dry or doughy. If you’re after something more succulent, opt for the beef cheek, but if you’re wanting a buttery, rich experience, go for the fish variation that is slathered in mayo.

Updated: The specialty food and wine stores still trading during the lockdown