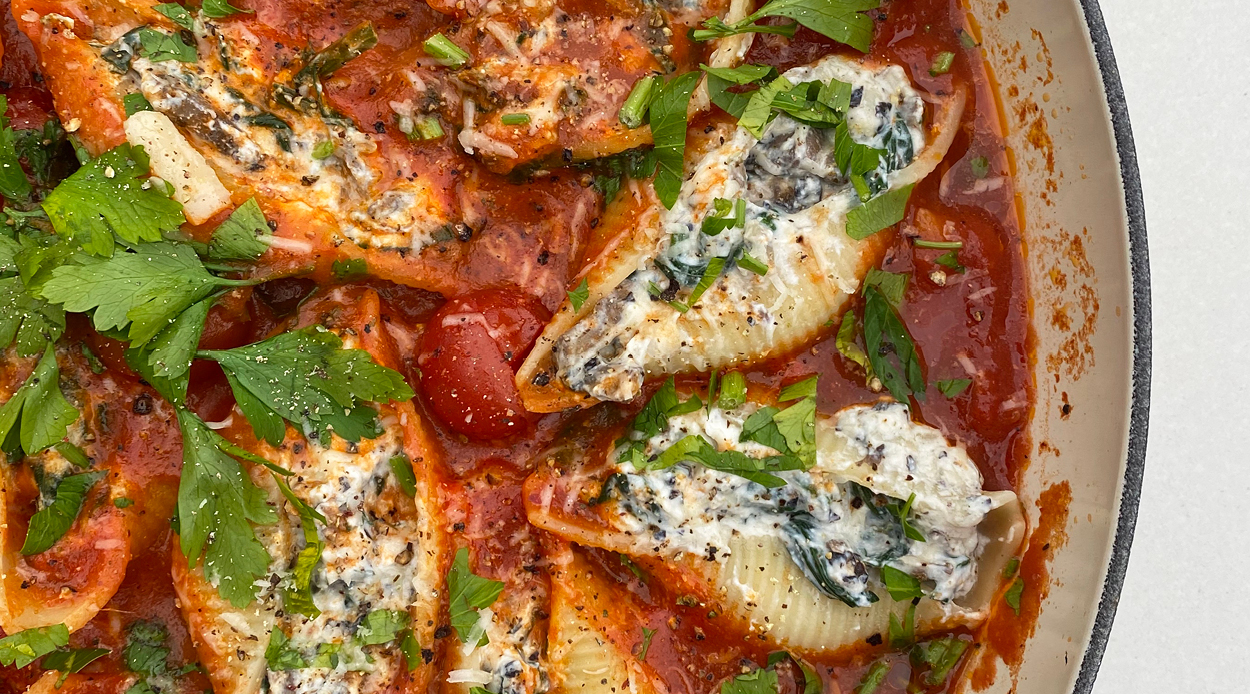 Carnivores and herbivores alike will adore this pasta recipe from Miss Polly’s Kitchen, which sees pasta shells filled with a moreish mix of mushroom, spinach and ricotta cheese, then gently cooked in a rich tomato sauce. Simple yet impressive, this dish makes an ideal family meal.

Method:
1. Heat a large pot of boiling water, add olive oil and salt. Once boiling add the pasta shells (cook for a couple of minutes less than what it says on the packet) drain the pasta, then lay the shells out to dry on a clean tea towel.
2. While the pasta is cooking, heat a large pan or wok and fry the mushrooms in oil. You will note they absorb the liquid and then some liquid will come out in the pan. Cook it until it absorbs again.
3. Add in the oregano, wine and crushed garlic, cook for a few minutes and then add in the spinach. Season well. Once the spinach has wilted, take it off the heat (I then transfer it into a colander to drain excess liquid).
4. Heat a large pan that you are going to cook the rest of the dish in. Add some oil and fry the garlic you have prepare for the sauce for a couple of minutes, then add the Maison Therese pasta sauce and canned cherry tomatoes, oregano and parsley.
5. While the sauce is bubbling away, mix the ricotta and parmesan in a bowl with the mushroom spinach mix, then carefully spoon a heaped teaspoon of the mixture inside the shells.
6. If you don’t have a very large pan, transfer some of the sauce into a second pan. Once gently bubbling away add the shells into the sauce, put the lid on and cook for a further 8-10 minutes or until nicely heated through.
7. Serve immediately with parmesan and some fresh parsley to garnish.

Try perfecting this orecchiette recipe from the pasta masters at Pici