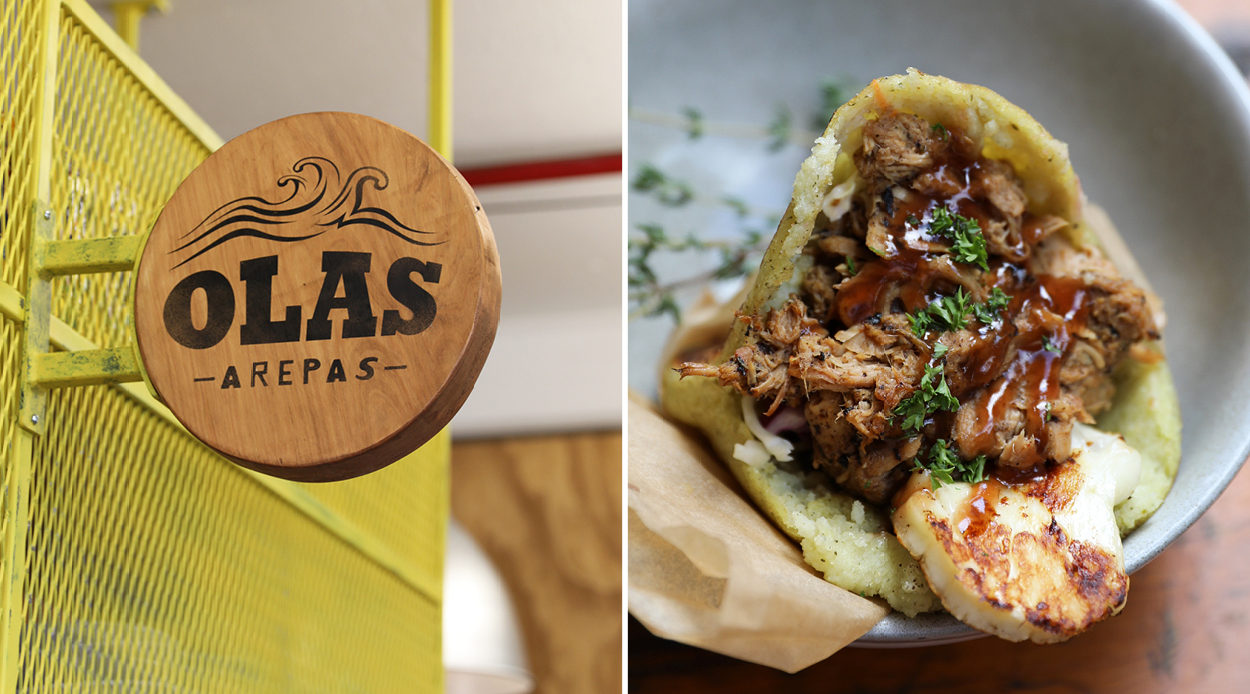 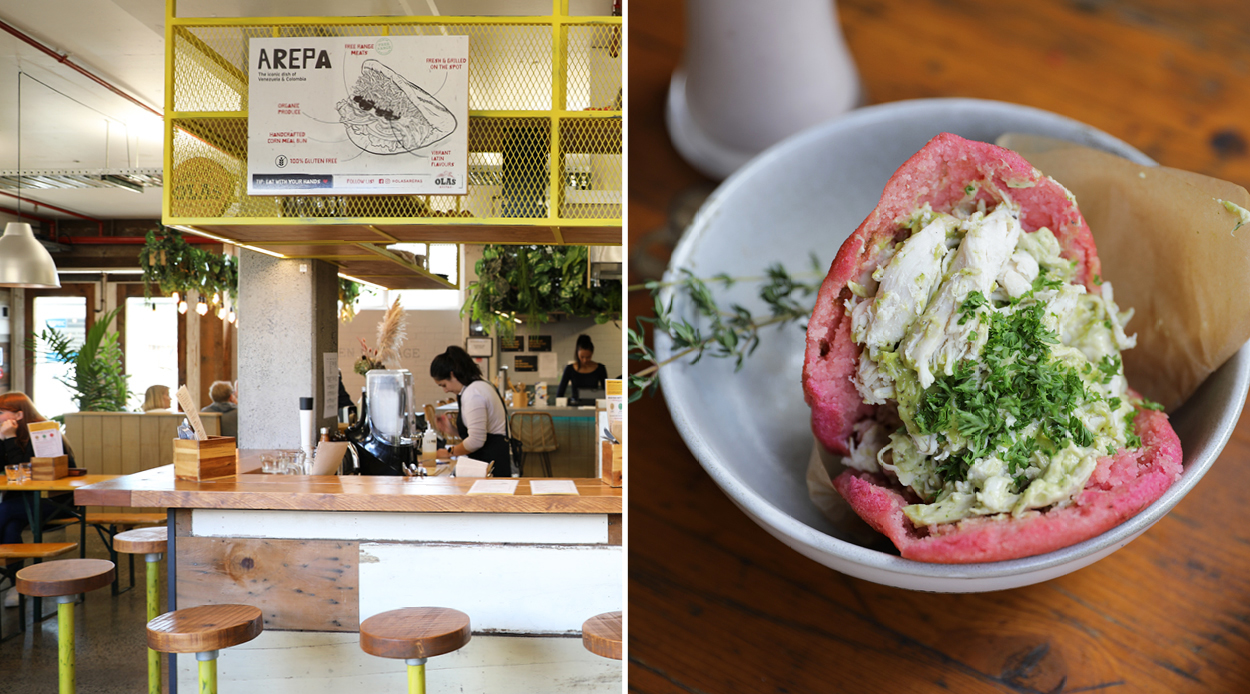 Five years ago, a little food truck took the Auckland food scene by storm with its unique, South American fare. It introduced many Aucklanders to Venezuelan cuisine, specifically the arepa — a delicacy made from ground maize dough that is formed into a circular patty, baked or grilled and packed with a variety of fillings — for the first time and it earned Olas Arepas a loyal and cult following. Finally, Olas has found a permanent home in the heart of Ponsonby, where we can get our arepa fix whenever we please.

Olas Arepas is hard to miss when walking through the lane in Ponsonby Central. It’s right in the centre of the complex, sporting warm yellow signage, welcoming wooden textures and a colourful and cheerful atmosphere. Visuals aside, the wafting smells of the buttered cornflour dough sizzling on the pan is enough to lure you to the stall.

The menu has a variety of options but remains straight-forward and simple. The husband and wife, Maurizio Trotta and Sofia Dostal, stay true to their business’ name and keep the arepas as the central focus. The menu offers 13 different arepa variations as well as a few sides, salads, desserts, and unique drinks (such as the Cocada), all of which represent authentic Venezuelan cuisine. Olas’ arepa dough comes in three forms, the original maize meal, one with an infusion of beetroot and chia seeds or a version using basil and coriander.

If you haven’t experienced an arepa before this is what to expect. Flavour wise, an arepa is mild and savoury, similar to a buttered potato roll. But the magic is in the texture. It’s flat yet fluffy, dense yet light and perfect for soaking up all the juices of the filling. One of Olas Arepa’s best sellers is The Pabellon, which includes rice, beans, plantain and stewed beef. The buttered arepa is stuffed with hearty black beans, creamy feta cheese and fried plantains (which taste like caramelised bananas but a little less sweet). The rich, saucy beef drenches all the ingredients, allowing the feta to melt into the beans while the final drizzle of kale and coriander lends the arepa some fresh herby flavour.

The Volvere is another favourite. The basil and coriander infusion gives the arepa a slightly green hue and is filled with succulent pulled pork and halloumi cheese. The addition of coleslaw gives a satisfying crunch and the plum sauce enhances the flavours of the pulled pork while balancing the richness. On every table, Olas Arepas offers an array of housemade sauces to drizzle on top of your arepa as you eat it. The jalapeño hot sauce gives a kick, the chimichurri lends sweetness while the aioli offers an indulgent creaminess.

For those after a lighter option, the Reina arepa is the way to go. The fillings are more simple and it doesn’t have the same kind of sauce-dripping-dow-the-arm action as some of the others. The shredded chicken breast is doused in a creamy mayo and avocado dressing which pairs perfectly with the chimichurri and jalapeño hot sauces. The Vuelve a la Vida is also ideal for a lighter meal. Comprising a medley of seafood, including prawns, calamari, mussels and snapper with onion, cherry tomato salsa, spicy jalapeño sauce and coriander, the Venezuelan ceviche is served with fried plantain and guasacaca — Venezuelan-style guacamole.

To end things on a sweet note, Olas doesn’t hold back when it comes to decadent desserts either. The Milhojas de Dulce de Leche, resembling a French mille-feuille comprises layered puff pastry that has been pressed together with fresh cream and dulce de leche. The flavour of dulce de leche is milkier than standard caramel and the texture is creamier. When it’s married with whipped cream and buttery layers of crispy pastry, it’s a match made in heaven.

Olas Arepas is making fresh arepas and churning out coconut cream milkshakes daily from 11am until 10pm. However, this doesn’t mean that its days in the truck are over. You’ll still be able to see Olas Arepas driving around town and at various food truck events. Whether you catch Olas on the run or at its new spot, its food is so good we guarantee you’ll be going back again and again.