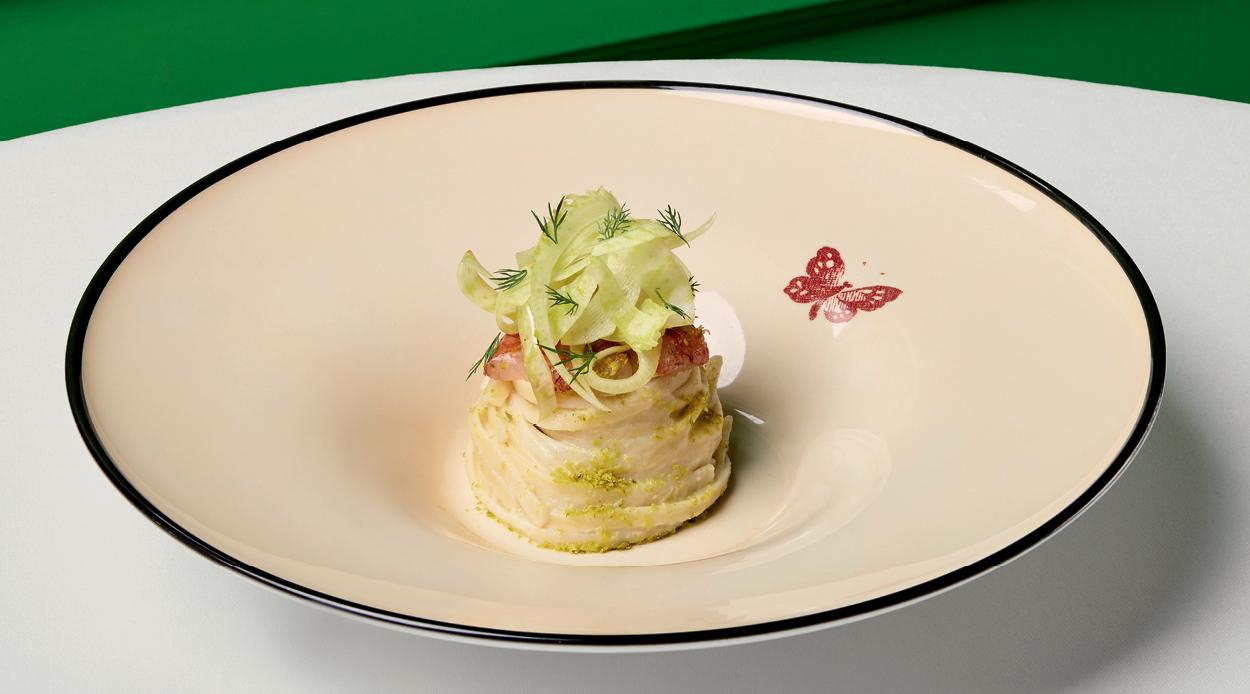 If you’ve ever faced a sample sale you know that fashion and food aren’t always friends but all levels of taste combine at the magnificent, Michelin-starred Gucci Osteria in Florence.
“I thought of this recipe that uses fennel as a basic ingredient because it is a seasonal vegetable and because of all the stories and curiosities surrounding this vegetable,” chef Karime Lopez says. “In Greek and Roman history, in fact, fennel was considered a symbol of strength and vigour and they believe it brought luck.”
“Some treatises on Ancient Rome reported how Roman gladiators added fennel to their dishes to be successful in the arena… This is also the reason why – for the Gucci Osteria menu – we called this dish ‘Lucky Fennel.’”

Method
For the Cream
1. Wash and cut the fennel coarsely, steam them at 90ºC for 2 hours
2. Drain the fennel once cooked and whisk them with Evo oil and salt until creamy
3. Pass the cream in the chinois strainer with fine mesh

For the Wild Fennel Oil
1. Whisk 400g of seed oil with 200g of wild fennel
2. Then heat the oil in a saucepan and bring it to a temperature of 80ºC
3. Filter the oil in a sac à poche  (piping bag) and then filter it with the chinois strainer with fine mesh

For the Pistachios
1. Toast the pistachios in the oven at 190 ºC for 4 minutes
2. Grate them with a microplane

For the dish
1. Cook the linguine pasta in abundant salted water for about 5 minutes
2. Drain the linguine and finish cooking in the pan for 3 minutes, adding the fennel cream and the lemon oil to make them creamy
3. Season the raw and finely sliced ​​fennel with the wild fennel oil
4. Season the prawns with Evo oil and the lemon peel and cut them into 6 pieces each

To serve
Spread the grated pistachios on the base of the plate, and lay a nest of linguine on top, developing it in height. Add 6 pieces of prawn, other pistachio powder and finely sliced ​​fennel. Garnish the dish with wild fennel leaves.