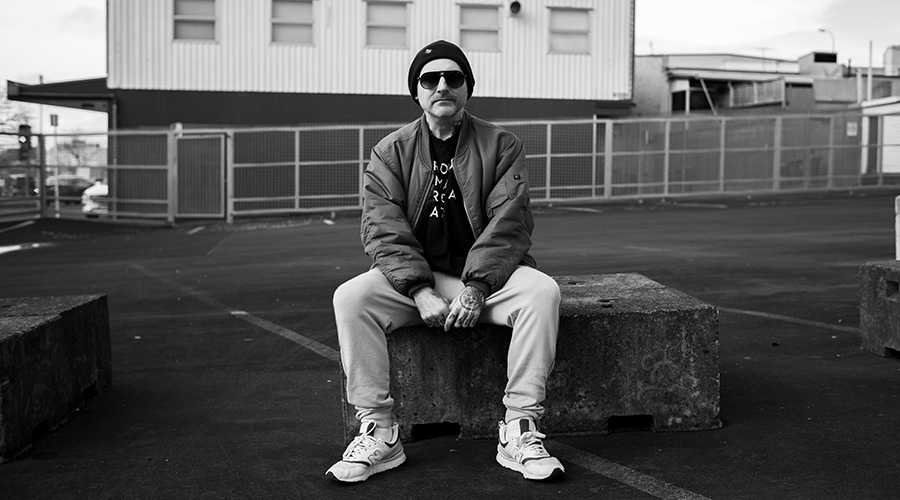 We’ve long been fans of Dominic Hoey. Also known under the moniker Tourettes, Hoey is an artist who has tried his hand at nearly all forms of creative expression, and with four critically acclaimed rap albums, a debut novel longlisted for the 2018 Ockham NZ Book Awards, two well-received books of poetry and an applauded one-man play under his belt, it’s clear that anything Hoey touches turns to artistic gold. Now, Hoey is piquing our attention once again with his latest creation — his third poetry book. Here, we sit down with the lyrical mastermind to learn more about what we can expect from I Thought We’d Be Famous.

First things first, tell us about I Thought We’d Be Famous. What can we expect?
I Thought We’d Be Famous is my new poetry book. It’s about Channing Tatum and Edward Furlong and Chilli the Pomeranian and the teacher who beat us half to death and killing your landlord and sleeping with zombies and falling in love so hard you wake up concussed.

Okay… sounds interesting. Is there an overarching theme?
There’s a bunch of themes running through the book, but I guess the main ones are love, living with a disease and politics.

We hear you’ve been working on it for quite some time, how long exactly?
I’ve spent about five years chipping away at it. I was planning on releasing it in 2017 before my novel, Iceland, but the publishers came to me with a date, and then I did a one-person show, and the next thing I know its 2019. I’m glad I waited though. I feel like it’s a much more solid book now.

If we only had the time to read three poems from the book, which would you suggest?
I have a love poem to Channing Tatum called Sex Army that I really like, there’s a poem called Kill Your Landlord which is always a hit live, and a poem about my rescue Pomeranian, Prince Chilli, and how morons yell at me in the street for having a ‘gay dog’.

Okay, moving on from ITWBF. How did you first get into writing?
I was always really into words but I’m dyslexic, so the idea that I would become a writer seemed a bit silly. I started rapping around nine or 10-years-old with my best friend Danny. We had a poetry competition at my school when I was 12 and I won. I think that was the first time anyone showed me attention at school, apart from yelling at me, so it was a moment that really stuck.

You’ve been writing, rapping and poetry-making for the best part of your life, how do you think your writing style has evolved over the years, if at all?
I think my style just keeps getting simpler and more childlike in a way. I try and get rid of everything that doesn’t need to be there. When I was younger, I think I was self-conscious about being dyslexic and not really having an education, so I’d overcompensate in my work. But now I embrace all of that and make it part of my style.

You’ve dabbled in rap, poetry, acting, documentary making and playwriting, which do you prefer?
I probably prefer poetry. Its the art form I get to do the least because it makes the least money. But I love being on stage and connecting with people with only a mic and some words.

What inspired you to make the transition from rap to poetry? Was it an easy transition?
I’ve always done poetry, even when my music was going good I did poetry at my rap shows. But even six or so years ago people’s perception of poetry was very different from what it is now. Although I love that I’m not making music anymore! The music industry is filled with the worst kind of people you can imagine.

What do you think it takes to be a great wordsmith?
I think having your own style is a big one. Trusting yourself. And also learning to kill your darlings.

When do you feel at your most creative?
I usually write late at night and edit in the day. I wish I was one of those people that can get up and create in the day time, but its just not in me.

What do you do in your spare time?
I hang out with Prince Chilli, I mentor rangatahi through the Atawhai program, I run writing workshops, and I walk aimlessly through the first out by my place in Laingholm.

Are there any up and coming rappers, poets, or musicians in general that you’ve got your eye on at the moment? Who are you listening to right now?
There are so many talented rappers and poets in this country. Eno and Dirty have just dropped an album which is really cool, there are a few Auckland poets who are about to do bigs things, too — Ria Masae, Liam Jacobson and Vanessa Croftskey are who your readers should be checking out. Also, one of the rangatahi I mentor, Queen Stel, is blowing up at the moment and is an incredible poet.

What are you working on right now, is there anything exciting in the pipeline?
I’m writing a new one-person show about class, money and art called 45 Cents An Hour. I also have a new novel that my agent is shopping around.

What’s in the future for Dominic Hoey, both personally and professionally?
Prince Chilli just got a hair cut so I’m planning to take him out to show off. I’m also going to do a residency on Malcolm Island off Vancouver next year.

I Thought We’d Be Famous is available for preorder here, via Dead Bird Books.