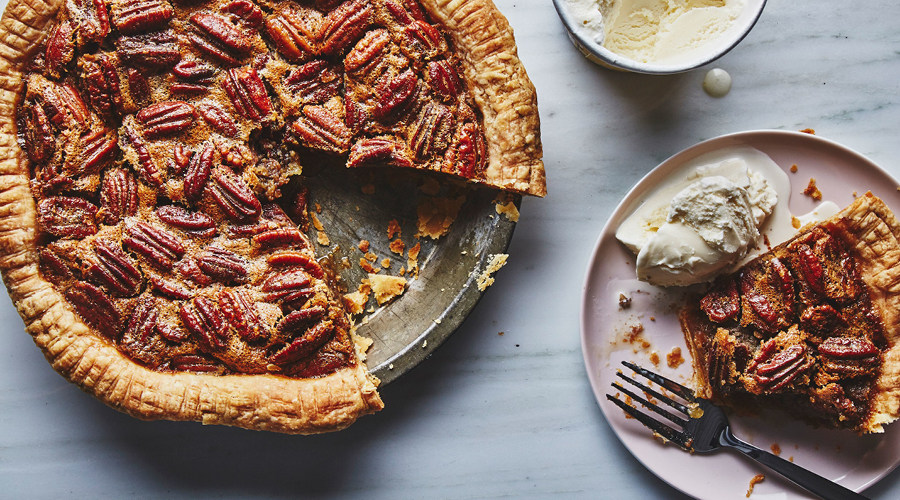 Although sweet pies during the festive season aren’t as ingrained in Kiwiana culture as in the United States, we can all still come to a mutual agreement that pies are absolutely delicious. With Christmas knocking on our door, why not consider a pie as part of your dessert spread? Without further ado, here’s our recipe for a buttery and decadent pecan pie that can sit pretty alongside the pavlova this holiday season.

Crust
1. In a large bowl, sift the flour and salt together.
2. With your fingertips, pinch the cubes of butter into the flour and break up the butter until there are no more big lumps.
3. In a separate small bowl, mix the egg yolks and ice water until combined and add ¾ of it to the dry mixture. This helps avoid your pastry from becoming too wet, which is irreversible and you would need to start all over again.
4. Be quick when mixing the eggs and flour together with a fork until the dough just starts to come together. Take your hands and if the dough holds together in a ball when squeezed in your palms, it’s ready to knead. If the dough doesn’t come together, add the rest of the egg mixture.
5. The dough should be quite dry and crumbly as everything hasn’t been fully mixed together yet. Once it’s transferred on a flat and clean surface, bring together in a disc and wrap the dough disc in cling wrap and chill in the refrigerator for at least 30 minutes, or up to four days.

Assembly and filling
1. Preheat the oven to 180°C, fan-baked.
2. Dust flour onto a clean surface and unwrap the disc of chilled dough. Flour the top of the dough and roll it out, turning every few rolls. Don’t be discouraged by any cracks that form and just simply smush them back together. Roll out the dough to a circle about 3mm thick and place into a 22cm pie dish. Trim any excess dough around the sides, then crimp the edges for that traditional pie crust aesthetic.
3. Place a piece of baking paper in the centre of the pie crust and add the pie weights or some uncooked rice. Bake it in the oven for 15 minutes and take it out when golden brown.
4. While your crust is baking, in a large bowl, whisk together 1½ cups of your pecans, corn syrup, eggs, white sugar, brown sugar, vanilla, melted butter, cinnamon and salt.
5. Carefully lift the parchment with the pie weights from the par-baked pie crust, then pour in the filling. Place the remaining ½ cup of pecans in concentric circles on top.
6. Put the pie back into the oven for 20 minutes, then cover with a piece of aluminium foil and bake for another 40 minutes. Unlike other pies, this one is ready when it’s set in the oven, so if it’s still jiggly on top, it’s not ready.
7. Allow the pie to cool completely, slice and serve the pie chilled or at room temperature. Add a scoop of ice cream if you’re feeling extra indulgent (which, we are).