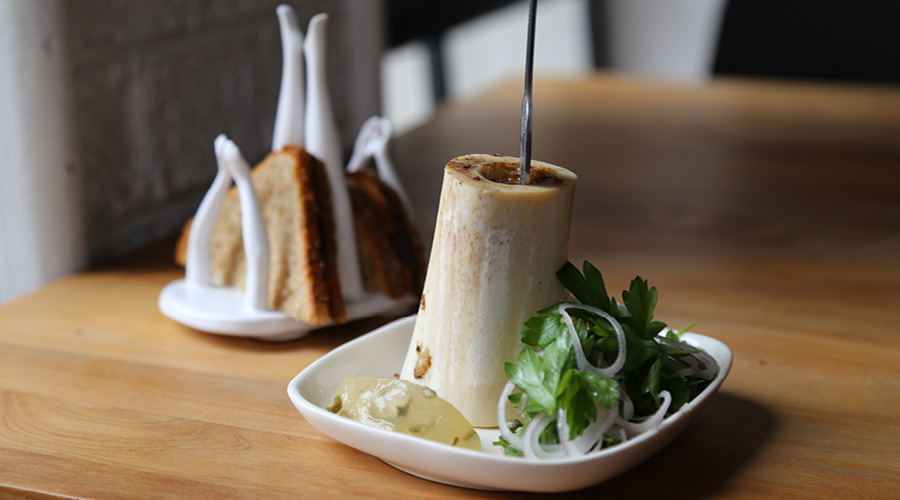 Bone marrow is a delicacy that has been increasingly featured on the menus of Auckland’s top restaurants, including Depot, Culprit and Saint Alice, (to name a few). The semi-solid tissue found within bones has been used as an ingredient in cuisines all around the world, usually as a thickening agent for broth and soup. Now, the marrow is eaten in its true glory, scooped out of the bone with no dilution in flavour or texture. What sounds so wrong, tastes and feels so right, slathered on a slice of toast, its rich, meaty butter glazing your lips each bite you take. But not all bone marrow is created equal. Just like every other delicacy, there’s the good and the bad, so we sat down with Culprit’s Jordan MacDonald to give us more details on how he and Kyle Street treat the succulent bone marrow they serve in their restaurant.

MacDonald explains that creating a good bone marrow is a lengthy process. Drawing out the excess blood is the first step which is done by soaking the marrow in water or milk for 24 hours. It’s a process that transforms the marrow from an un-appealing grey hue into a rich, golden-brown. It also counteracts any bitter, tangy flavours that would otherwise linger.

The next crucial element is salt. Brining and seasoning the marrow is incredibly important to unlocking its “decadent beefy flavours.” If there’s no element of saltiness, bone marrow is essentially just tissue which can easily enter the realm of overly-rich. As such, MacDonald and Street tell me how they add final touches such as a parsley and shallot salad and house-made pickled gel “to balance out the richness and bring in some fresh flavours that complement the marrow.”

Bone marrow is also believed to come with many health benefits which is the reason for its popularity in countries such as China. The Chinese incorporate marrow into soups which are consumed in times of sickness for a boost in immunity and to build blood cells. It has also been said that marrow is easy to digest, with some doctors recommending the delicacy for people suffering from celiac disease and Irritable Bowel Syndrome.

At the end of the day, bone marrow just damn tasty, and for MacDonald, it brings a sense of nostalgia. “It takes me back to London, it brings me memories of doing the hard yards at Depot, and in terms of flavour, it has this decadent etherial beefiness that you could only find in some bucket list wagyu craziness. We just really f**kin love the flavour!”

Delicious, beneficial to the body and soul, there is no reason why we all shouldn’t be eating more bone marrow.