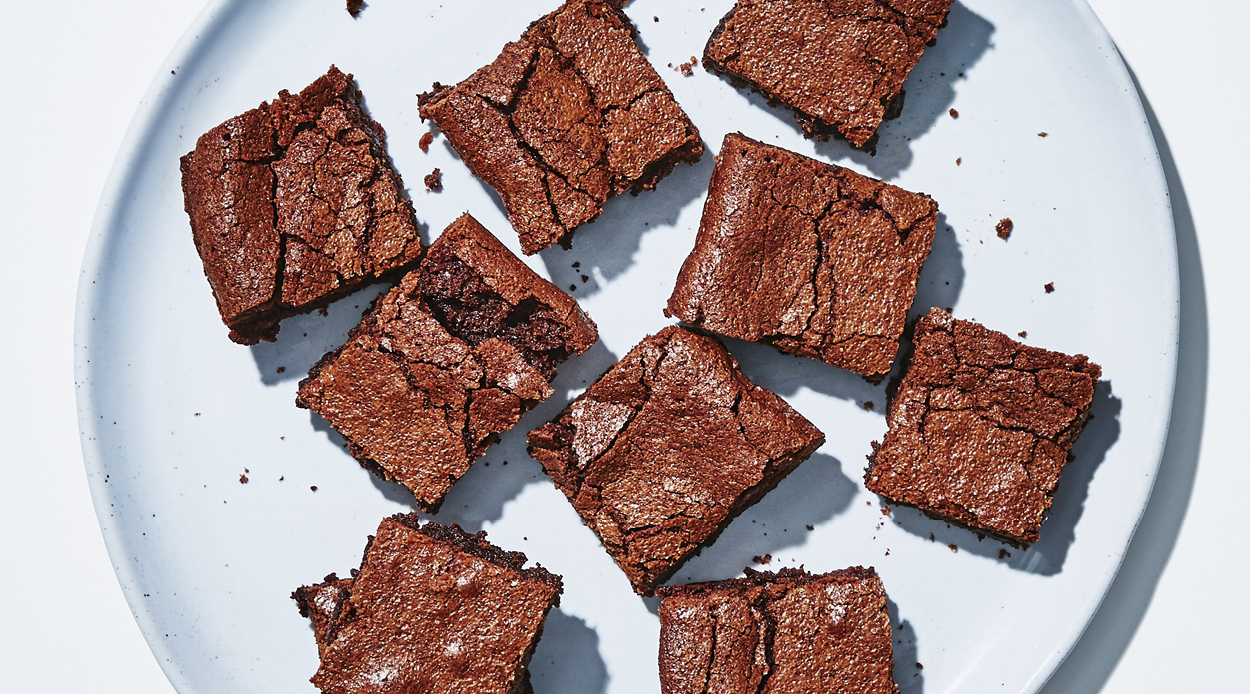 Prepare yourself to bake the fudgiest, most decadent brownies you’ll ever taste. But be warned — these morsels are seriously rich, so consume with caution.

Method
1. Preheat your oven to 180°C fan-baked and line a large baking tray with butter and baking paper before going over the paper with more butter — this will keep the bottom layer of your brownies moist and lend a slight, caramelised flavour.
2. In a heat-proof bowl, combine ¾ of the Whittaker’s dark chocolate block (broken into pieces), ¼ cup of cocoa powder and the instant coffee. Set aside.
3. Take a saucepan and melt your butter over a medium heat, until it starts to simmer. Be careful not to burn it.
4. Once the butter reaches a simmering point, pour it over the bowl of chocolate, cocoa powder and instant coffee and let the hot butter soften the chocolate for a few minutes. When the chocolate looks slightly melted, take a fork or small whisk and mix all the ingredients together until they form a ganache. Set aside.
5. As the ganache cools, take a large mixing bowl and beat the white sugar, brown sugar and eggs for as long as 15 minutes. Incorporating as much air as possible will result in a soft, moist brownie.
6. When your egg and sugar mixture looks like thick pancake batter, add in your vanilla extract and beat for 2 more minutes.
7. Now take your ganache and pour that into the egg, sugar and vanilla mixture and keep mixing until it’s fully incorporated.
8. In a separate bowl, sift the flour, salt and the remaining ¾ cup of your cocoa powder and then slowly incorporate this into your wet mixture. It’s important to add the flour mixture gradually in order to achieve a more even and thoroughly mixed batter.
9. Mix until the flour has been entirely incorporated.
10. Before you pour the batter into the pre-prepared pan, take the remaining ¼ block of Whittaker’s Dark chocolate and the entire block of Creamy Milk chocolate and chop them into chunks. Take these chunks and spread them on the base of your pan.
11. Evenly distribute the batter over the top of the chocolate chunks and evenly across the pan before putting it in the oven.
12. After 20 minutes, take the brownies out and sprinkle sea salt flakes over the top, before putting them back in the oven for another 25 minutes.
13. After being in the oven for a total of 45 minutes, take the brownies out and let them cool completely. Ignore the technique of sticking a toothpick in to see if they’re ready — these brownies are so fudgy that the toothpick will never come out clean.
14. When the brownies have completely cooled, get a knife and cut them into squares. Keep a paper towel on hand to wipe your knife after each cut as the fudgy batter will stick.