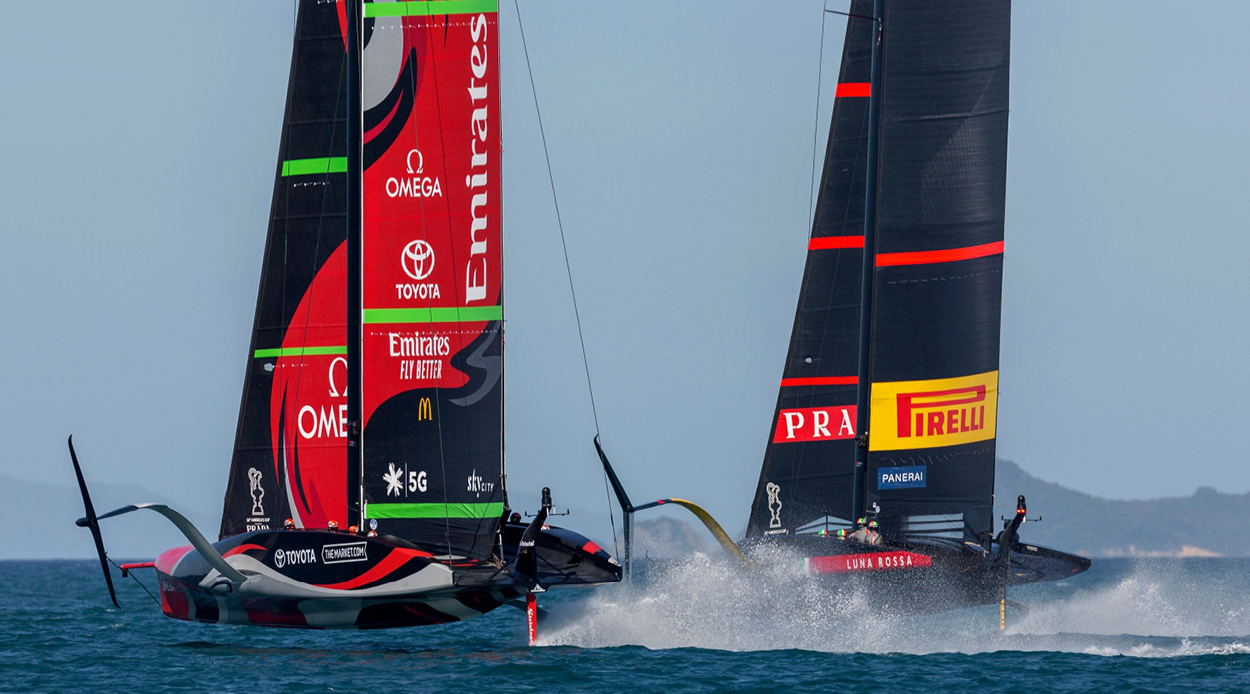 While sailing is exciting for its fans, its hyper-specific nautical terms, regatta norms and general rules can be confusing for a novice to understand. In a bid to clear the muddied waters, we have thrown together something of a cheat sheet for anyone who wants to deepen their knowledge.

THE TERMS
‘Stuffing It’ or ‘Splash Down’
This is when the boat drops off the foils and the hulls hit the water, usually in a very dramatic fashion that soaks the sailors.

‘Velocity Made Good’ (VMG)
A term used in yacht racing to indicate the speed of a sailboat towards (or from) the direction of the wind.

‘Fly Time’
The amount of time the boat spends foiling. The ideal situation would be for a team to make it around the entire course with 100 percent fly time, which means their hull never touches the water.

‘Wingwash’
When sailboats sail close to each other, one can affect the other’s quality of wind. The result of this change is sometimes called “wingwash.”

‘One & In’
This term is used to describe a boat that only needs to make one more tack/jibe to make the next mark.

‘Split & Cover’
As the boats approach the top or bottom marks, they must decide how to navigate them. If they choose the same mark, it’s referred to as a ‘cover,’ and if they go in opposite directions, it’s a ‘split.’

‘Dialling Down’
A strategic move that often arises in crossing situations, this is when one boat tries to force the other further downwind in an attempt to throw them off course.

‘Dialing Up’
Something that typically comes up around the start of a race, this is when one boat will attempt to force the other upwind.

‘Squall’
Referring to a strong and sudden rise in wind that usually lasts a few minutes, this phenomenon can make sailing conditions particularly challenging.

Bonus: How to Tie a Cleat Hitch in 3 Simple Steps
The cleat hitch is a simple knot to master and is usually used for securing boats to a dock. It ties and unties quickly and neatly and will be the easiest way to impress your friends next time you’re out on the water.

1. Bring the rope under the far side of the cleat, then around and under the opposite horn.

2. Go over the middle of the cleat and make a figure 8 around the two horns.

3. Make a small loop in the rope, then turn it over (to the left) in your hand and loop over the bottom horn of the cleat. Pull tight.

Etiquette 101: How to apply sunscreen to someone you don’t know well