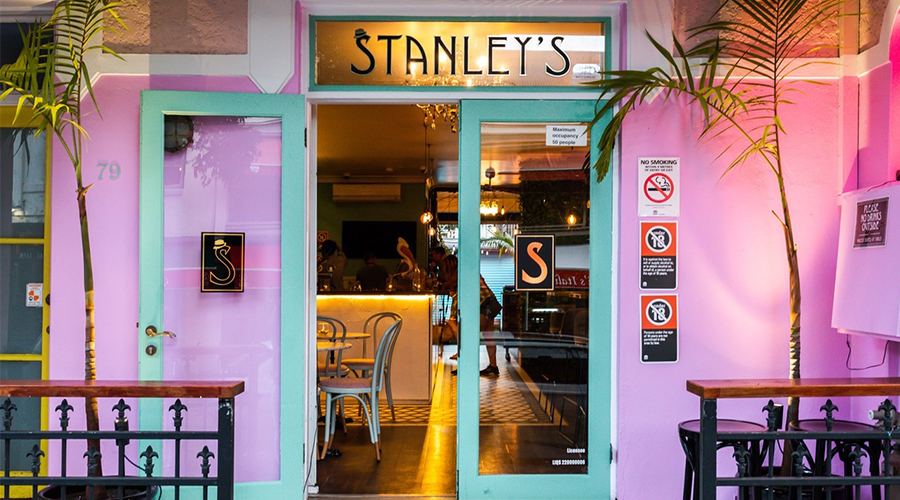 We’re always the first to sing the praises of Auckland’s conveyer belt of exciting, new hospitality offerings. But we’re not afraid to admit that Auckland has a way to go before we rival the seeming frenetic pace of change Sydney-side — and with everything from a flamboyant bar makeover to an intimate pasta and wine bar, Sydney’s gastronomy is tempting us to fly the Tasman right now.

The Gidley
The brains behind underground eatery Bistecca, James Bradley and Warren Burns, now add The Gidley to their impressive repertoire. Inspired by old-school steakhouses, the lavish basement restaurant is dimly lit but robustly welcoming with its loud jazz music. The menu glorifies one dish in particular: the Riverine black Angus rib-eye, which it offers up in three ways from classic prime rib roast, to chargrilled on-the-bone, and also spinalis steak. As with Bistecca, phones are banned here so make sure you go with someone whose conversational skills you value.

Shwarmama
With a simple Middle Eastern-inspired menu of just four items — lamb shawarma with laffa flatbread, pita stuffed with fried falafel, sabich (an Israeli breakfast sandwich) and NHSP (not Halal snack pack) — Surry Hills’ new takeaway joint, Shwarmama is a vibrant drop-in, set to corner the market for those looking for the perfect bite to go.

Ragazzi
The classic pasta-and-wine-bar is experiencing a Sydney renaissance, and the city’s newest version exemplifies why, done properly, it can be a recipe for big success. Ragazzi is the new CBD spot serving handmade pasta dishes with wines from a 300-strong list (mostly Italian), in its intimate 38-seat restaurant. Ragazzi has a good heritage. It’s the brainchild of the team behind Dear Sainte Éloise and Love, Tilly Devine, so it’s little wonder that it carries big expectations, despite its small size.

Stanley’s on Stanley
Having gone through a succession of owners, Stanley’s is included here as more of an enticing refurb than a shiny new opening. While the same fuschia first impressions of the party-spot remain, the kooky visual style of Wes Anderson have now been swapped for interiors with a Miami Vice vibe. There’s an effervescent fifteen-strong cocktail list to match the switch.

Madame & Yves
He’s a renowned pastry chef, and now Yves Scherrer — coach of the 2019 Australian team in the World Pastry Cup no less — is embarking on his own venture, helming the kitchen of this sweet pastry -and- ice-cream haven. Offering eclairs, lemon tarts, sultana rolls, baked cheesecakes, almond raspberry croissants and a few of Scherrer’s staple creations — including the gluten-free orange and chocolate cake and the toasted sesame ice-cream — Madame & Yves is a paradise for anyone with a sweet tooth.

Nikkei Bar and Restaurant
As the name suggests, this fresh opening has nikkei, a particular kind of Japanese fusion fare, at its heart. The straightforward menu offers a Peruvian-Japanese-Tapas mixture which means you can expect simple but delicious sharing plates, like tuna tartare, swordfish ceviche, hokkaido scallops and yuca fries, alongside an exquisite coastal wine list.

Sydney update: New places to eat, drink and stay across the ditch

The Sydney Update: 7 new hotspots that are making us want to book a flight

Peter Gordon has made his homecoming, with an enticing new waterfront eatery and food hub

The top 10 best butchers in Auckland, as voted by you

We’re proud to announce the arrival of our Summe

Take your glamping to bold new heights this summer

We’ve made an executive decision and decided to