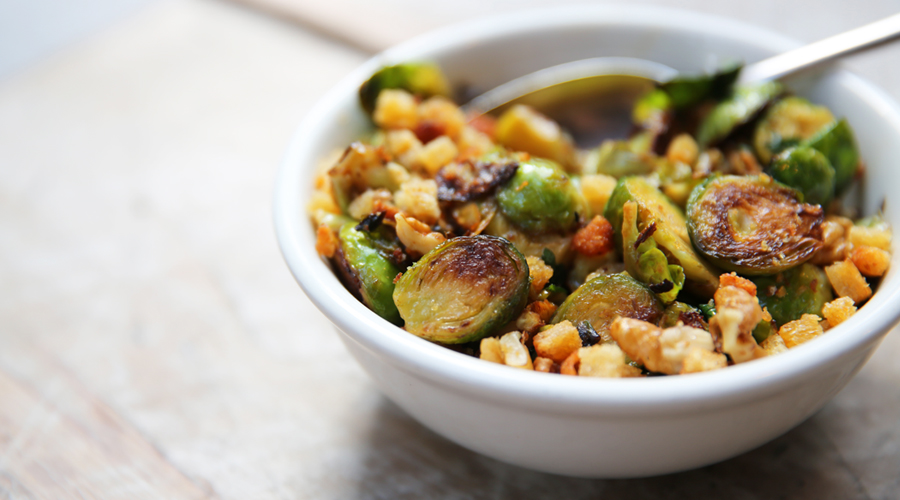 No longer the instigator of childhood trauma, the brussels sprout is back with a vengeance and better than ever.

This much maligned bulbous vegetable is at its most abundant in cooler months but rather than turn your head away in disgust, we urge you to reconsider the green delicacy by treating them kindly, with new and improved cooking techniques. We’ve long been fans of Depot’s rendition, which proves there’s a lot to love about the sprout.

Method
Take a non-stick frying pan and place on a medium heat. Once heated, add oil and butter and heat until foamy. Add walnuts, bread, thyme and a little salt and pepper and continue to cook, stirring often, until lightly golden all over. Remove from heat and transfer to a sieve to drain off excess butter, then allow to cool on a tray lined with kitchen towel.

Store in an air-tight container. For the Brussels sprouts Wash sprouts in cold water and pat dry. Cut off the stalk tips, keeping a little so they hold together. Slice sprouts lengthwise in half. Place a large skillet over a medium heat, add oil and fry the pancetta until golden. Turn up the heat and add prepared sprouts. Cook for 15 minutes until golden and caramelised, only turning occasionally. Lightly season with salt and pepper. Pour in the chicken stock and reduce until almost evaporated, this will steam the sprouts. Remove from the heat and scatter in parsley, butter and sherry vinegar.

Toss all ingredients in the skillet together until butter is melted, then transfer to a serving dish and garnish with walnut crumb mixture.