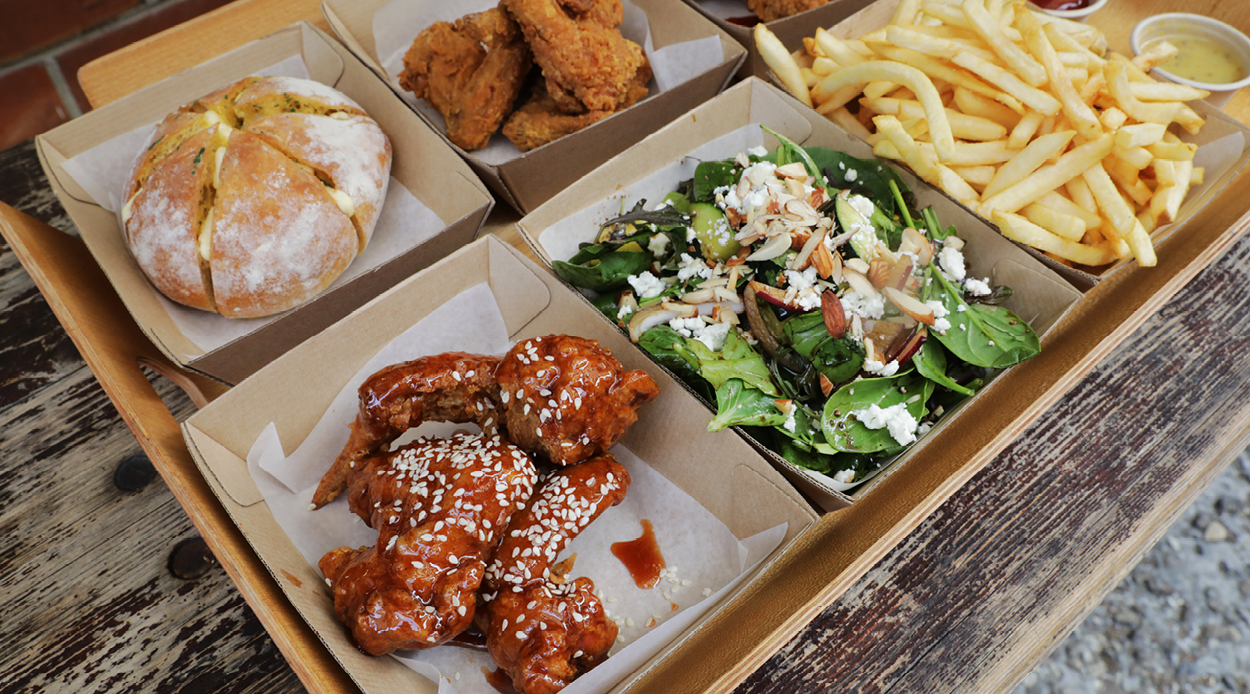 The choice of fried poultry in Auckland is overwhelming, but it’s not every day that an eatery totally dedicated to a certain Korean style of fried chicken opens its doors in the city. My Fried Chicken offers the definitive destination for those needing to satisfy a chicken craving.

Located in the populous and bustling Ponsonby Central, My Fried Chicken is impossible to miss. The logo design was inspired by the funky aesthetic of Garage Project, has a head-turning vibrancy to it that makes it memorable. The visual and eye-catching aesthetics are matched by a sizzling soundscape of deep-fryer-in-action and, equally, by garlic-rich marinading scents languidly wafting past the noses of rapidly-tempted potential patrons.

Perhaps the key to success is the difference between a regular Southern-style fried chicken and this Korean fried chicken. The Korean rendition opts for a lighter batter, yet the double-frying process creates a coating that is deliciously crispy, and somehow also light and fluffy. Those unique qualities may emanate from the sticky marinade glazed over the batter. Three of the most popular flavours — Cluck Cluck Soy, Hot ‘n’ Sweet As and Thunderbird, sit alongside the OG on My Fried Chicken’s menu. The OG caters to fried chicken purists who eschew all sauce options altogether.

The Cluck Cluck Soy marinade has echoes of a sweet teriyaki sauce that has been infused in generous amounts of garlic and aromatic spices including fragrant cinnamon. The sweetness might initially slightly overwhelm the tastebuds but after a few more bites, you’ll find yourself eager for another piece. For those who seek extra kick, the Hot ‘n’ Sweet As will cater nicely, remembering that in South Korea’s fried chicken joints, this is the most commonly-found flavour. With traditional Korean red pepper gochujang sauce meeting sugary ketchup, there’s a juxtaposing taste template that’s a real palate-pleaser of a combination.

If you’re up for a more extreme challenge to test your spice tolerance, the Thunderbird promises a “dangerously spicy” experience. This one is a good workout for the tongue and its tastebuds, which will thank you for ordering a side each of fries and salad to soften the experience. And it’s from those side dishes that we highlight another My Fried Chicken treat. Surprisingly it’s not chicken. It’s actually the garlic bread, a toasted white loaf which has been sliced, then slathered with lashings of house-made butter, infused with garlic. That combination slowly seeps its sensual way through the soft and fluffy bread. Delicious.

In South Korea, ‘chi-mek’ (‘chi’ from ‘chicken’, and ‘mek’ being the first half of ‘mekchu,’ the Korean word for ‘beer) is the renowned pairing of fried chicken and beer that out-ranks milk and cookies in popularity. My Fried Chicken celebrates the chi-mek combo by stocking up to 15 different craft beers from Garage Project and offering its diners a perfect pairing choice from the plethora of fried dining options.