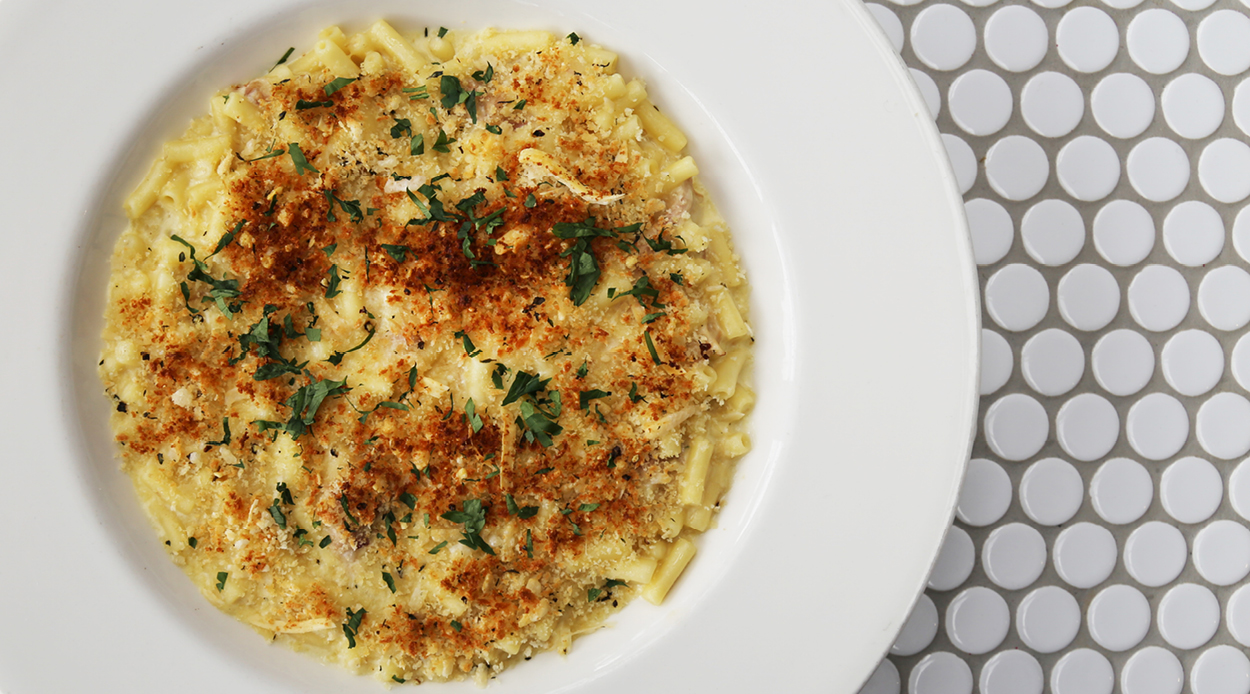 Macaroni and cheese isn’t necessarily authentic Italian cuisine (at least, not the versions we’re used to) but it sure is damn tasty. It’s hard to believe that the simple combination of pasta and a concoction of dairy could result in such greatness, and there are a number of restaurants around town taking this much-loved dish to the next level. Here is where you can find the best mac ‘n’ cheese in Auckland.

Ham and parmesan mac ‘n’ cheese from Soul Bar & Bistro
On the ‘Soul Classics’ section on the menu, this dish is a well-deserved staple of Soul Bar & Bistro. The macaroni pasta is drowning in a creamy, butter sauce and then sprinkled with tender cuts of ham off the bone to add some saltiness and chunky texture to the dish. The pasta is then smothered in parmesan cheese and sprinkled with bread crumbs before being baked in the oven to turn perfectly golden and crispy.

Bacon, chilli and fontina mac ‘n’ cheese from Andiamo
Even Andiamo, renowned for being one of the best Italian restaurants in town, can’t deny the tastiness of the classic macaroni and cheese, including the dish on the menu but elevating its version to anything but ordinary. The creamy pasta is packed with salty bacon bits and is spiced with chilli to add a kick and cut through the indulgent richness of the sauce. It’s then topped with fontina cheese instead of the usual cheddar for a nuttier and more herbaceous flavour that makes it truly a one of a kind.

Truffle mac ‘n’ cheese from Jervois Steak House
The pairing of steak and fries is, without a doubt, a match made in heaven. But you wouldn’t believe how heavenly the experience of enjoying a juicy piece of steak with a side of mac ‘n’ cheese can be, especially when it’s infused with truffle — like the one from Jervois Steak House. Served in a skillet, the mac ‘n’ cheese is sizzling hot as if it just came out of the oven. The creamy dream of a dish is cheesy beyond words while the notes of truffle saturate and enrich every element on the plate.

Pecorino and Barry’s Bay cheddar mac ‘n’ cheese from The Grill by Sean Connolly
Another steakhouse that gives mac ‘n’ cheese the respect it deserves is The Grill by Sean Connolly. Firstly mixed with butter, cream and local Barry’s Bay cheddar cheese, The Grill’s macaroni is everything you want from a mac ‘n’ cheese – rich and cheesy. But things are taken to new heights with the additional ingredient of pecorino, adding a sharp and smokey flavour to the overall dish and giving it an element of sophistication.

Bacon and tomato mac ‘n’ cheese from Catroux
For those who are unaware, Catroux Cafe in Westmere does a divine job of catering and its mac ‘n’ cheese is the most popular dish on the menu. Made to serve 15 people, the deep dish is packed with decadent melted cheese, bacon that has been cooked to be tender and a baked bread crumb topping that lends the homely pasta its golden crunch. The game changer for this mac ‘n’ cheese is the incorporation of cherry tomatoes which burst in your mouth with freshness to cleanse the palate from the potentially overwhelming richness.