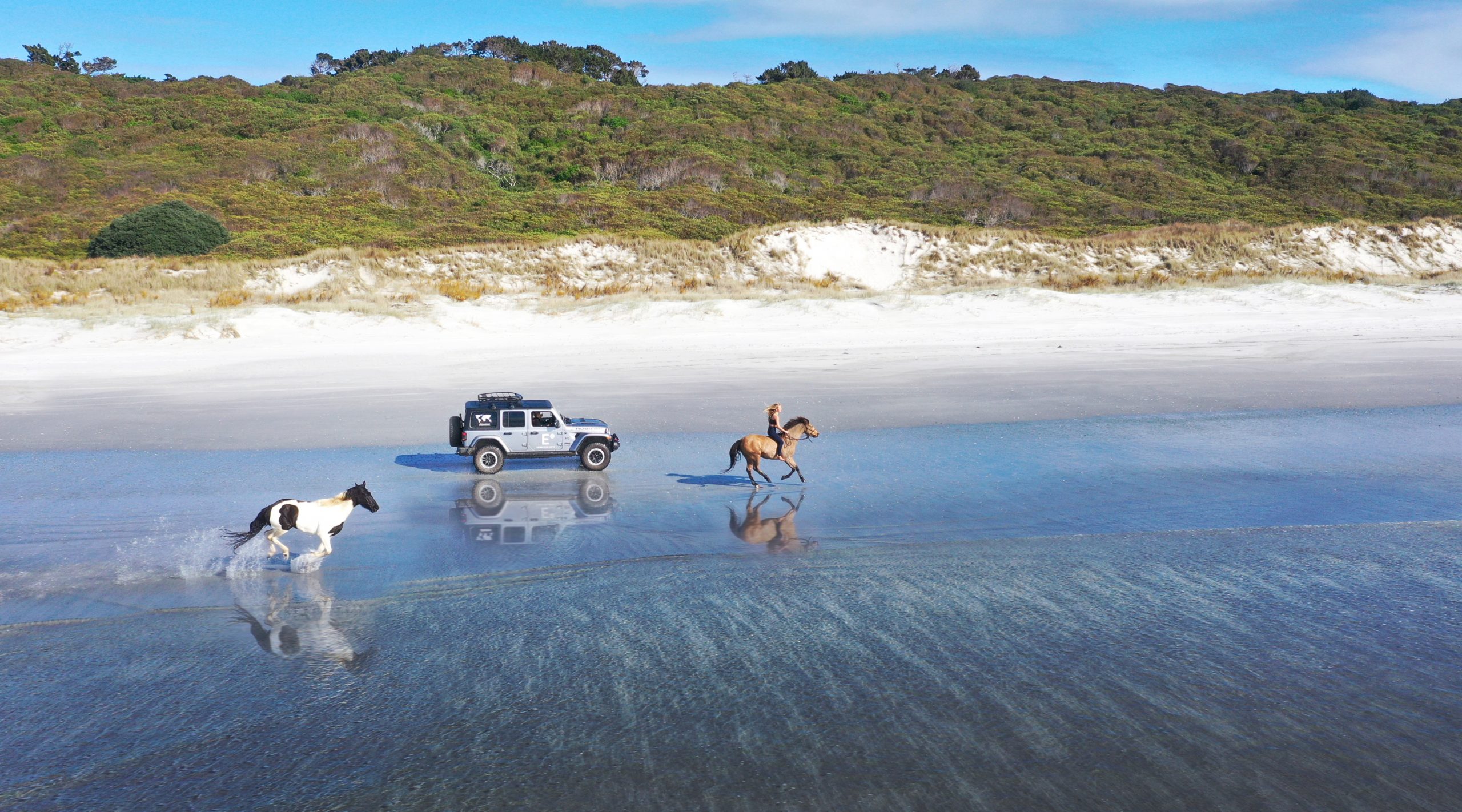 Two years ago, New Zealanders Topher Richwhite and Bridget Thackwray set out on an endeavour to navigate the globe. The quest would see them travel 350,000 kilometres across seven continents in their trusty purpose-built vehicle ‘Gunther’. With the global pandemic putting a hold on their journey, we check in with the duo’s on-going plans, and ask them to share some of their favourite destinations in our own country.

“We had just come out of the Yamal Peninsula in northern Siberia when we received a call from the embassy in Moscow informing us that the Russian borders were closing. Russia was country number 76 on our global adventure which we had originally thought would take only two years.

Our remaining route from Moscow to Auckland was due to be completed in 2020 but when Covid shut the borders, we had no choice but to return to New Zealand to wait out the virus.

With our Jeep ‘Gunther’ still parked outside Moscow Airport, we have spent the last few months building a new vehicle that we have named Roman. We plan to continue to explore New Zealand with Roman until the borders reopen along our Leg Three route and hope to bring Roman to Russia, where we will continue the journey with Gunther. When over-landing there is safety in numbers, so having a second vehicle will have its advantages when crossing certain terrains.

Our third leg takes us from Moscow south to Georgia, Azerbaijan and Iran. We will then head north east into Turkmenistan, Kyrgyzstan, Mongolia and China before crossing south over the Gobi desert into Nepal and India. We will drive through South East Asia and cross from East Timor to Australia before shipping Gunther and Roman across the Tasman to our finish line in Auckland.

Although we constantly have itchy feet, we feel very lucky to be home safe in New Zealand enjoying the beauty of our own backyard. Below we share some of our favourite places.”

Mount Aspiring — waterfall
Beneath an old railroad in Mount Aspiring National Park, lies a hidden waterfall in a moss-clad canyon. The water is blue from glacial erosion which causes fine silt particles known as ‘flour’. Because the water temperature fluctuation between summer and winter months is minimal, it is worth wearing some merino socks before entering. The waterfall in this photo is fed from the same source as the famous Blue Pools of Tioripatea. Established in 1964 as New Zealand’s tenth national park, Mount Aspiring National Park covers 3,562 square kilometres.

West Coast — Haast Pass
In 1960, the Haast Pass Road (part of State Highway 6) opened from Otago to Haast on the West Coast of the South Island. Five years later, the section from Haast to Lake Paringa was completed, allowing motorists to make a circuit around both the east and west coasts of the South Island. Today, it is still only one of three road passages that cross the Southern Alps. With its moody beech tree forests and emerald blue rivers, the mountain passage between Lake Hawea and Haast is one that was the inspiration for us to take on our global adventure.

Far North — Exhibition Bay
The Far North is thought to be the first part of New Zealand to be walked upon by early Māori settlers. Today, there are still vast landscapes protected by local Iwi and kept hidden from outsiders. We were invited to spend a few days inside Exhibition Bay to explore the white silica sand dunes of Parengarenga Harbour. Now gated off to the public, it was only a few years ago that this land was mined for its silica. Because of the fine grands of sand, the silica dunes are notorious for their quicksand which is known to swallow entire vehicles.

Northland — Mahinepua
Since returning to New Zealand to wait out border closures, the Far North has become our new home. Bridget grew up north of Kerikeri in a small bay called Mahinepua with her three sisters. In this photo, we were joined by Bridget’s younger sister Penny and her horses Kiara and Turk. Both horses are thought to have come from Aupouri Forest, from where wild horses can roam freely onto 90 Mile Beach.

Central Otago — Nevis Valley
In 1862 gold was discovered in the Nevis Valley. The miners tried to keep their find a secret but failed — and so began the Nevis Valley gold rush. Saved by the remoteness of this valley, the remains of numerous stone buildings from the gold mining days offer insight into the perseverance and ingenuity of early pioneers. The relics include everything from the cemetery and settlement buildings through to a woolshed and even the first ski hut. Today only the family at Ben Nevis Station occupy the area.

90 Mile Beach — Te Paki
On the northern end of 90 Mile Beach lie the giant sand dunes of Te Paki. Down the riverbed and behind the thick shrub, we found ourselves exploring landscapes we never knew existed in New Zealand. Te Paki was once its own island disconnected from the mainland. Over millions of years, sand built up from volcanic activity elsewhere in New Zealand, and the dunes were created.

In search of summer? Book one of these new international resorts for the ultimate escape