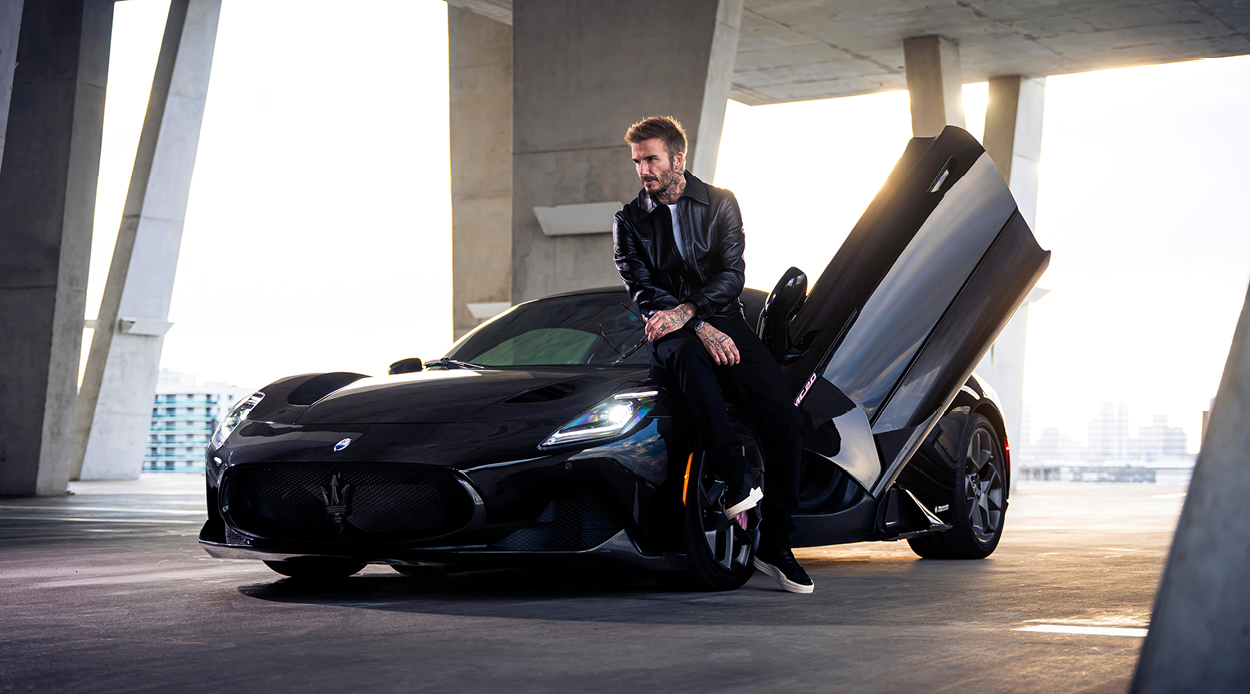 When the notoriously picky David Beckham puts his name to something, it generally tends to be of impeccable lineage. Protecting his status as an iconic man of style, it takes a lot to garner Mr Beckham’s attention, or his endorsement, because that’s just how valuable he views his personal brand to be.

So when Maserati debuted their carbon-fibre, butterfly-door MC20 at the MMXX International Car Show in Modena, Italy, in 2020, the supercar not only took home the impressive accolade of the most beautiful car at the show, it also caught the attention of one very discerning, retired footballer.

In its 107-year history, Maserati has taken a giant leap of faith with the new MC20, leading the marque away from the saloons and SUVs that Maserati has become synonymous with more recently, and pivoting back to its much-admired supercar roots. Glamour is certainly the order of the day, with the resulting MC20 having re-established Maserati in the top tier of prestige car makers.

Taking a minimalist approach to its design, the MC20 is at its most stylish when opening its impressive butterfly doors. The proportions of the car are also suitably wild; at just over two-metres wide and under 1.3 metres tall this is a serious sports car of distinction. Rather than following the usual outsized wings of other marques, the MC20’s butterfly wings are what supercar dreams are made of.


After a considerable 2000 hours spent in a wind tunnel, honing the aerodynamics which are an integral part of any supercar’s dynamic capabilities, the elegantly waisted rear proportions and LED rear lights leave onlookers aghast at its impressive street presence.

Inside, the emphasis on purity continues. The display is dominated by a rev counter, while the infotainment lives in a small secondary display, and the drive control references high-end chronographs in its design. Imperative in cars that ride so low to the ground, is a digital rear-view mirror that employs a camera to broaden the overall visibility.

When it comes to performance — which to be honest is why you’re really looking at a supercar — it’s hard not to be seduced by the nimble speed of the new Nettuno engine, a premier creation of the Maserati Lab in Modena. Calling upon its long history in racing, the MC20’s Nettuno combustion engine uses Formula 1 technology, resulting in a V6 engine that sits in the middle of the car’s body. The full surge of power — with a top speed of 325km/h — will take your breath away.

All of this hefty acceleration is aided by the use of carbon fibre, in the form of a body that weighs under 1500kgs — an extremely effective way to maximise the 630 horsepower engine, that has no problem gaining enough fire-power to get you from 0-100km/h in under three seconds.

It’s easy to see why the fussy Mr Beckham crafted his own bespoke version of the MC20, the car he chooses to drive when in Florida, where he owns the Major League Soccer team, Inter Miami.


Adorned in a simple black colourway inside and out, the signs of personalisation come in the infusions of pink, a nod to the neon lights of the Floridian city, and his teams colours. The Brembo brake callipers, seat stitching and custom logos also all shine in pink, contrasting with a chic combination of both glossy and matte black panels, which give the car a sleek and sporty air. The personalised plate, with a glossy-matte effect reads “For David”.

The first of the long awaited new Maserati MC20s arrives in New Zealand in May, with a waitlist already eager to view this supercar in the flesh. With the 2022 allocation sold out and orders being taken for 2023 models, it’s fair to say that this car will have immense appeal with those passionate about utilising New Zealand’s long roads and optimal driving conditions to put the supercar through its paces, or simply those who are keen to secure an exceptional example of automotive history.

Drive for the life you want: Our editor-in-chief makes a solid case for the Bentley Continental GT V8