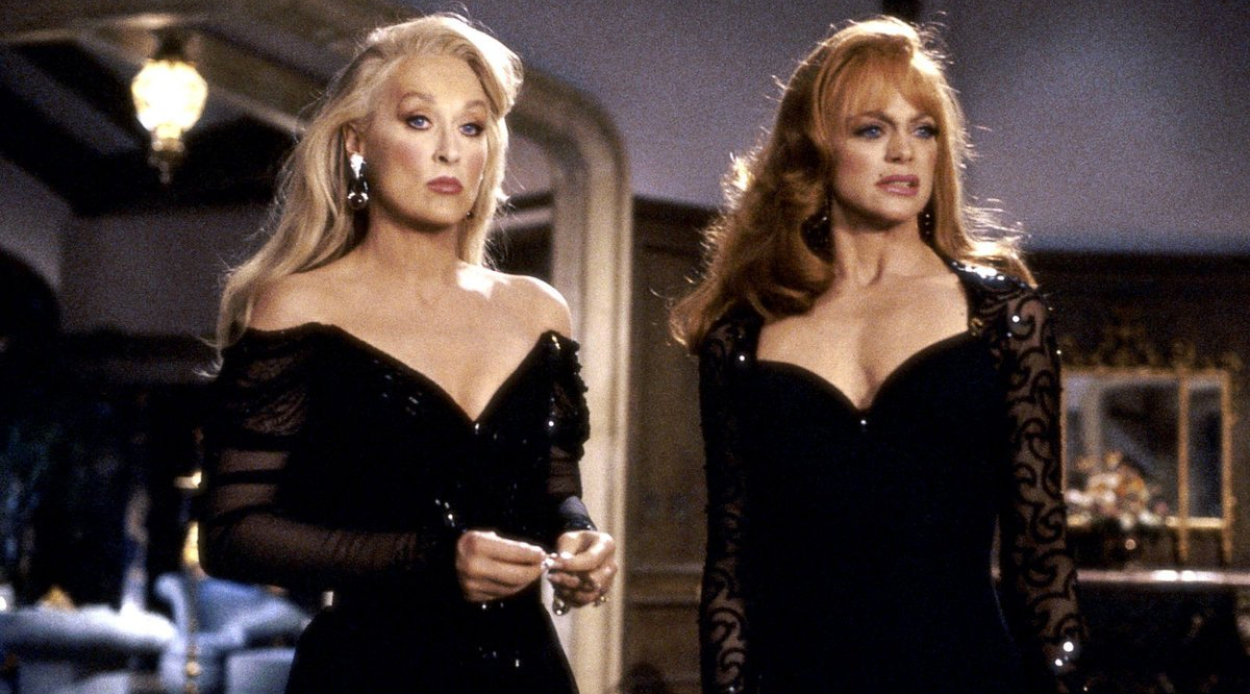 Meryl Streep and Goldie Hawn in Death Becomes Her.

In the Celtic tradition, the night of Halloween was when the worlds of the living and the dead became misty and blurred. From devil-worship to well-dressed cults, immerse yourself in the mingling realms of fashion and frights this October 31st, with our pick of the most stylish Halloween movies of all time.

Rear Window (1954)
Alfred Hitchcock’s Rear Window may have found its thrill in the themes of voyeurism, but watching Grace Kelly’s stylish turn is what really entices us to this acclaimed film. As fashion model Lisa Fremont (who is the girlfriend of a home-bound photographer who suspects one of his neighbours is a murderer), Kelly is dressed by revered costume designer Edith Head in the elegant height of 50s fashion — from the Parisian New Look complete with a pearl choker to a flowing silk and chiffon nightgown.
Style level: 9/10
Spook level 5/10

The Birds (1963)
Yes, another Hitchcock — but as any aficionado will know, The Birds is one of the director’s most masterful movies. Adapted from a short story by the equally epic gothic writer Daphne du Maurier, it is a full-colour horror to cacophonous sound effects. Tippi Hedren donned the now iconic Chanel-inspired ‘eau de nil’ green skirt suit for the main scenes of running-scared socialite Melanie Davis. As well as its sleek fashions, the film has stood the test of time thanks to its cinematography technique and chic.
Style level: 8/10
Spook level 6/10

Rosemary’s Baby (1968)
Starring Mia Farrow as a wide-eyed Rosemary, this psychological thriller had a notable impact on both cinema-goers and fashion designers. The sixties shifts and pinafores became emblematic of the era, with references since seen in the collections of Miuccia Prada and Joseph Altuzarra. While the film is slow to start — especially for modern movie watchers — the subject matter (being impregnated by the devil) is certainly disturbing, and it has some of the most suspenseful scenes we’ve seen.
Style level: 7/10
Spook level: 7/10

Carrie (1976)
The film that catapulted Sissy Spacek and John Travolta to fame, Carrie is a horror for the ages. It follows what happens after the titular character unleashes her telekinetic powers at her school ball, after being humiliated by her classmates. The most profound pink gown ever worn to a prom, it starts as a soft silk slip before it becomes blood-soaked. Talk about killer style.
Style level: 6/10
Spook level: 6/10

The Hunger (1983)
Capturing the timeless beauty of Catherine Deneuve, the cruel elegance of David Bowie, and the open sensuality of Susan Sarandon, The Hunger created the most stylish vampire love triangle on-screen (and there’ve been a few). For Tony Scott’s directorial debut, no expense was spared on the costuming, which included Yves Saint Laurent suits and historical costumes by the Tirelli tailoring house. Okay, so the 80s effects are not so riveting now, but the perverse fear portrayed will still get your heart racing.
Style level: 7/10
Spook level: 4/10

Death Becomes Her (1992)
In an eternal quest for youth, rivals Meryl Streep and Goldie Hawn become undead Beverly Hills style icons in this cult classic film. As well as their iconic gowns, Isabella Rossellini’s dark-arts character, Lisle Von Rhuman, manages to wear the witchcraft that is bejewelled crop tops. While it’s much more fun than fright, this ahead-of-its-time feminist film is worth a watch.
Style level: 7/10
Spook level: 3/10

Practical Magic (1998)
While it’s categorised as a romance fantasy, there are elements of Practical Magic that are certainly horrifying. Based on the novel by Alice Hoffman, it sees sister witches — played by Sandra Bullock and Nicole Kidman — become deathly unlucky in love. At the peak of 90s style, Kidman’s character, in particular, has become a bewitching style icon.
Style level: 7/10
Spook level: 3/10

American Psycho (2000)
As the best dressed potential serial killer we know, Patrick Bateman sure knows how to select a sharply tailored suit, and a transparent raincoat to boot. Christian Bale really throws himself at his immoral investment banker character who dresses to kill — making him fashionable fodder for a last-minute Halloween costume too. While the film is much more enjoyable to sit through than the more despicably detailed novel by Bret Easton Ellis, it’s still not for the faint-hearted.
Style level: 8/10
Spook level: 8/10

Suspiria (2018)
A remake of the menacing ballet thriller of the 70s, the latest Suspiria from Luca Guadagnino tells the story of the ambitious characters and coven through show-stopping costumes. With something much more sinister playing out behind the scenes at the dance academy, there are clues in every detailed item of clothing worn by Susie, played impeccably by Dakota Johnson, and Madam Blanc, terrifying embodied by Tilda Swinton.
Style level: 7/10
Spook level: 8/10

Midsommar (2019)
This folk horror is one of Ari Aster’s most watchable scary movies, its sunny disposition and a stellar performance by Florence Pugh distracting from its scarcely interspersed, gory scenes. From the interesting interiors to one very stylish long-lunch in the meadow, the mise-en-scène is simply mesmerising. Inspired by traditional Swedish festival costumes, the folkdräkt, the white embroidered smocks have garnered a fashion-following, despite their more sinister symbolism in the film.
Style level: 8/10
Spook level: 7/10