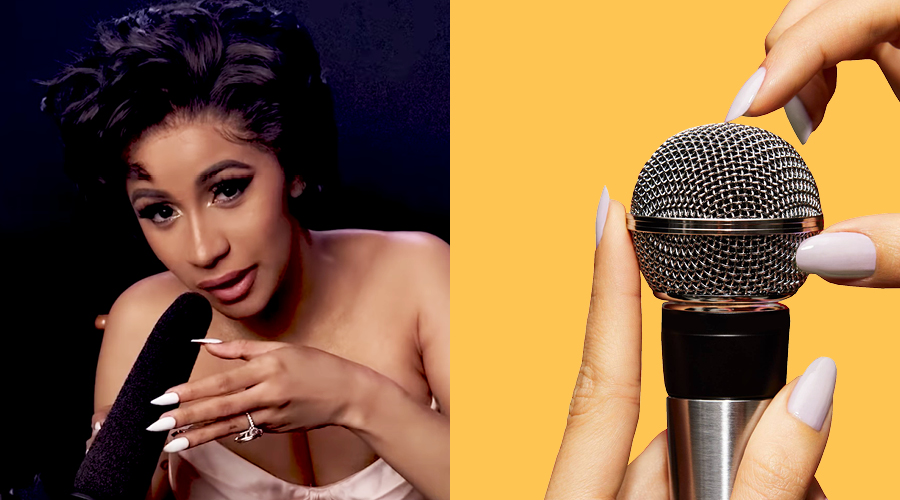 Every night, I brush my teeth, wash my face and get into bed with Lottie. As I lay there, completely relaxed, she whispers in my ears, strokes my face and brushes my hair. And I wait. For a warm wave to crash down my neck and spine, the whitewash creeping its way under the follicles of the hair on my head. The feeling is brief, and I drag my finger across my phone, rewinding the ASMR makeup roleplay video I’ve watched at least 20 times to feel that tingling sensation over and over again until I’m asleep.

This has been my routine, on and off, for the past four years, ever since I discovered ASMR or Autonomous Sensory Meridian Response. The term was coined by cybersecurity professional Jennifer Allen in 2010, who spent hours scrolling the Internet to find out whether anyone else experienced random sensations from, often, the most mundane of tasks. The sound of someone gently tapping on an object or the way a book was being read aloud, and sometimes it would happen for no reason at all. Allen was part of a small online forum that hosted discussions between people who ‘got the feeling’, which then grew into a Facebook page, and eventually resulted in the sharing of links to accidental trigger (the term given to the sound causing the ASMR sensation) videos. But back then, I can’t imagine trying to explain to someone in person that the way they were brushing their hair gave me a pleasant tingling sensation without receiving a rather disturbed look. Fast-forward over 10 years and you’ll find ASMR is one of the fastest-growing wellbeing phenomenons, but it’s one that’s unbelievably hard to explain. And one that most people have no idea exists.

As I was writing this, I was trying to figure out how I would possibly talk about the intriguing world of ASMR in a thousand words and decided upon the five W’s and the H, in no particular order. You’ve got the What: Autonomous Sensory Meridian Response. But let’s break down the meaning. ‘Autonomous’ because it’s a feeling from within. ‘Sensory’ is self-explanatory. ‘Meridian’ suggests peak and orgasm, but also refers to traditional Chinese medicine and its energy pathways. And ‘Response’ refers to the way that ASMR elicits a trigger reaction. You’ve also got my When; ASMR really kicked off approximately four years ago. Although thinking back, I remember getting a satisfying, shivers-down-my-spine feeling when a teacher would draw on the whiteboard at primary school.

Moving on to the Where. YouTube has become the feeding ground for the weird and wonderful world of ASMR. Type the acronym into the search function and you’ll have millions of videos to choose from. From lo-fi whispering into the camera to high-tech cranial nerve exam role-plays (yes, in full surgical dress-up), to people eating raw honeycomb to fast and aggressive, albeit gentle tapping. Content creators, the Who, are known as ASMRtists and produce videos that can range from a few minutes to a few hours long — with some of the most popular receiving hundreds of millions of views. To become an ASMRtist requires nothing more than a YouTube account and a camera, which is why there has been such a broad range of content created from such a diverse pool of people. Over the last few years, I have come across videos made by adults as old as 80 and children as young as five. Which, as you can imagine, brought a lot of creepy behaviour to the fore (until YouTube introduced the ability to disable comments for young account holders).

The Why is a little harder to explain. The sounds or triggers that appeal to me (makeup role-plays, whispering, scratching) are euphoric. The metaphor I used earlier about the wave is exactly how it feels. It’s just like the game I used to play as a child, ‘dot, dot, line, line, spider crawling up your spine’. The exact same shivers come from random people on YouTube pretending to wash my hair. ASMR is about as crazy as all of this sounds, but I’m just one in well over one million people who participate. And while it all seems a bit outlandish, and maybe a bit weird, it’s starting to capture the attention of the scientific community in a big way.

Craig Richard is a professor of biopharmaceutical sciences at Shenandoah University in Virginia, the author of Brain Tingles and founder of ASMR University. After hearing about ASMR on a podcast in 2013, he wanted to know “why millions of people were watching someone fold a napkin.” He carried out a study (here’s the How) — ‘an fMRI investigation of the neural correlates underlying the autonomous meridian response’ — on the brain with results that suggested that the reason why ASMR videos generated tingling and relaxing sensations was because they were activating brain regions previously observed during experiences like social bonding and musical frisson. Richard went on to say that he believed triggers were akin to the way humans soothe infants — whispering, grooming and gazing — as well as behaviours similar to intimacy between mates in adulthood. Everyone likes to feel loved and nurtured, which could explain people’s desire to get involved.

There was also another study carried out by the Department of Psychology at the University of Sheffield in the United Kingdom that showed ASMR as a reliable and physiologically-rooted experience that may have therapeutic benefits for mental and physical health. So it makes sense that the millions of people tuning in to somewhat tune out (it’s an ASMRtists biggest compliment if you fall asleep during their videos) have described the blissful feeling as having helped with stress, anxiety and in some cases, depression.

For me, ASMR aids with sleep, but it also just feels really nice. I’ve played videos to a plethora of people to see if anyone I knew understood ASMR and could appreciate its effects. Two people confirmed my query, others were intrigued, but the majority were completely freaked out. I think that unless you ‘get’ the feeling, it’s probably quite bizarre, which is exactly why the scientists are continuing their search for more answers. Is it possible for everyone to have the effects of ASMR without actually getting the tingles? Who knows. In the meantime, you can sign up to the ASMR University to learn more, or read one of the many books on the subject, or tune into a dedicated ASMR playlist on Spotify. W Magazine even has an ASMR series where they get different celebrities in to try their hand at it (I highly recommend Cardi B’s video), and you can even stay at an ASMR Hotel in New York. But for me, YouTube will always be my go-to.

It’s very late, I’m on deadline, and I need to sleep. I’m getting into bed with ASMR April tonight, to drift off while she whispers me sweet nothings.

Where to start with ASMR:
Cardi B on W Magazine’s ASMR Video Series
Anything from this series is a great introductory point, but start off with Cardi B. The American rapper listens to it in her own time, so knows exactly what she’s doing.

Gentle Whispering ASMR
It’s widely known in the ASMR community that accents foreign to our own have a way of eliciting the best tingles. Maria is an American-based Russian ASMRtist who has amassed a subscriber following of over 2 million since 2009 thanks to living up to her account name.

RaffyTaphy ASMR
He’s amassed 843,000-strong following for his videos that focus mostly on various tapping patterns. People love his rhythmic videos for helping them relax as they’re a little bit different from the usual whispering and role-play videos frequently viewed on YouTube.

Latte ASMR
Appealing again for the fact that her accent is foreign to English-speakers, Latte is a Korean ASMRtist known for her particularly gentle and comforting sounds.