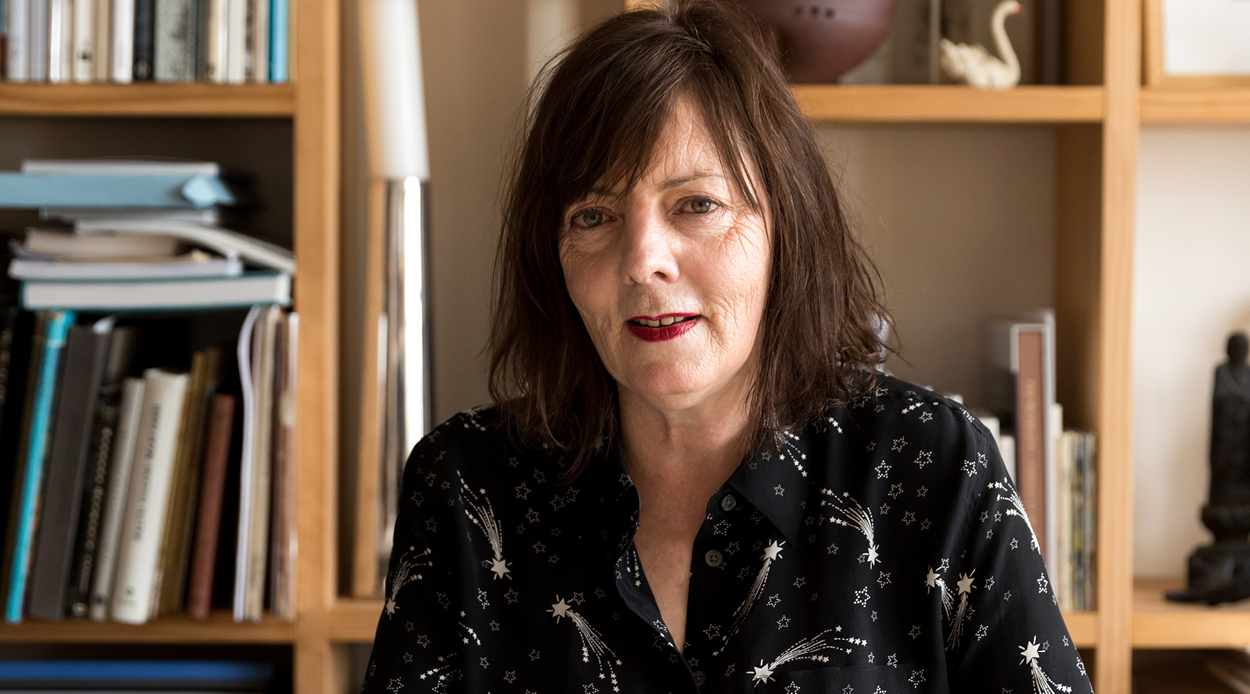 This year we are taking a hiatus from Denizen’s eagerly-anticipated annual celebration of Heroes. We look forward to paying proper tribute to influential New Zealanders when the battle against Covid-19 is over. In the meantime we look at back at the inspiring stories of the trailblazers we have honoured in the past and continue to proudly call Heroes. Meet hero Deborah Smith.

I’ve just hustled my way into the common room at Mercy Hospice. The clamour of young voices and a carpark brimming with SUVs playing dodgem makes it feel more like a primary school at 9am on a Monday morning, as opposed to the wary place of hushed palliative care I’ve come to know. It’s an extraordinarily sunny Sunday afternoon and the young voices belong to a group of 20 odd children, varying in age from five to 15. They are here to attend Cloud Workshop, a free art programme for young people dealing with the death of someone in their immediate family.

As name tags are written and applied, brown paper is taped over tables by volunteers, young and old greet each other as an excitable buzz ensues. At approximately 1.30pm, the workshop’s leading lady, Deborah Smith, calls everyone to gather around. Children take a seat on the floor in front of her, much like they would in a classroom, while various adult volunteers and parents instinctively form a protective band around them.

Standing next to Smith is a helper, six-year-old Tom, who assists in announcing the plans for today. “First, I would like to give a very warm welcome to you all,” Smith announces. Recognising all but one familiar face, shortly afterwards she asks, “Tom, would you like to remind everyone why we’re here today?” The young boy states promptly, as though out of mundanity, “We’re here because we have all lost someone close to us.” It is all that is said on the matter before Smith, with the help of artist John Reynolds, begins to explain what today’s task is — making masks — before diving in without further ado.

Cloud Workshop takes place once every six weeks. For hours at a time, children suffering a family bereavement can immerse themselves in creating contemporary art as an escape from the sadness of what is happening around them. Smith, both an established photographer and photography teacher who has achieved legendary status at schools like St Cuthberts College, explains what instigated the concept: “I wanted to help a friend whose partner had just died of melanoma. Her kids wouldn’t go to therapy, so I was searching for something for them to do.” No stranger to loss herself, Smith had to deal with her father’s death when she was only 18-years-old and he was 42. As the eldest of four children, she felt the weighty responsibility of needing to safeguard her younger siblings. She goes on to say about her friend’s children, “There was nothing… which, in a way, made me quite angry and upset. I was really shocked to find out that in the huge amount of time [that had passed between her father’s death and her friend’s partner’s death] it didn’t appear that there was anything new to support bereaved children. But in the meantime, there’d been a lot of research, even out of places like Harvard, about the vulnerability of bereaved children and how fragile they really are”.

To be clear, Cloud Workshop doesn’t purport itself as a form of therapy. Rather, it is a forum for creativity where young people are united in their circumstances. Every session, the children are given a project; painting pillowcases to keep bad dreams away; building models; creating Joseph Cornell-inspired 3D scenes, concertina books and dioramas from scratch; or in this case, crafting masks designed to make them laugh or to hide away. Usually, there is an underlying theme they may or may not draw upon concerning what they’re going through, but there is no expectation that the children need to talk about their ordeal.

“I try not to back anyone into a corner,” says Smith. Most often, there are cases of ‘accidental therapy’. One such example includes a moment during a bathroom break when Smith was standing outside waiting with a group of boys. Thinking about it, she innocently remarked how every single one of them, including herself, had lost their father. The next question came from one of the little ones: how did your dad die? “My father had melanoma,” she replied. “Mine did, too,” said another. “My dad had depression,” came another voice. “You know, that’s another type of illness, don’t you?” the teacher asked. He didn’t know. And that is a big part of the problem.

“Unless kids are hysterical and rolling around on the floor, people think they are fine. But that’s not necessarily true. They still need to be told stuff,” Smith says matter-of-factly. “There’s a cliché about resilience. I don’t think kids are born with it; I think they need help to be taught it. [Through Cloud Workshop] I wanted them to have something that would make them feel strong.”

The initiative might seem like a crucial one in our society, where support networks ought to be readily accessible, but the concept wasn’t exactly encouraged in the beginning. Before Cloud Workshop first launched in 2008, there were many doubters — ‘It won’t work… You’ll never be able to do this… It’s too sensitive’ they said. Smith admits, “The biggest challenge to get it started was actually with the parents and caregivers, convincing them that we weren’t going to take the lid off their children and send them home. Convincing them that actually we were all about empowering, not the opposite.”

But Smith pushed on, and now the classes are filled within five minutes of being announced. “It’s a simple idea that takes a lot of energy. It’s about creating solidarity around what all these kids are going through. I believe in art. It doesn’t matter whether you want to be an accountant or an All Black later in life, if you’re able to be creative, you’ll have an edge. And that’s what I want to equip these children with.”

As I look around at everyone present, kids entirely absorbed in what they are creating, sharing a common bond with those around them, adult volunteers soaking up the fertile imaginations and young energy, I can’t help but think that this is a kind of therapy. An unspoken way of healing that might just make the difference between a child who can’t cope and a child who can.

Smith could easily dedicate all of her time to Cloud Workshop which takes days of research and preparation in the lead up to each session, not to mention the time she is pouring into her new pilot programme for adolescents, Cumulus. But there is no doubting her commitment to it, “I guess for me, it’s the most important, wonderful work I’ve ever done in my life. Despite the sad premise, it just gives me a lot of joy to think that, when we’re in it, it’s really buzzy. Everybody’s making, and we’re just having a great time and all looking after each other.”

If she could encourage people to do one thing, it would be to start giving back on a community level, to pursue any concept that helps people in need — emotionally or otherwise. “Even if it’s a left-field idea, give it a go. There are a lot of people out there who need relief, so if you have the capacity to provide it, I believe you really should give it a go.”