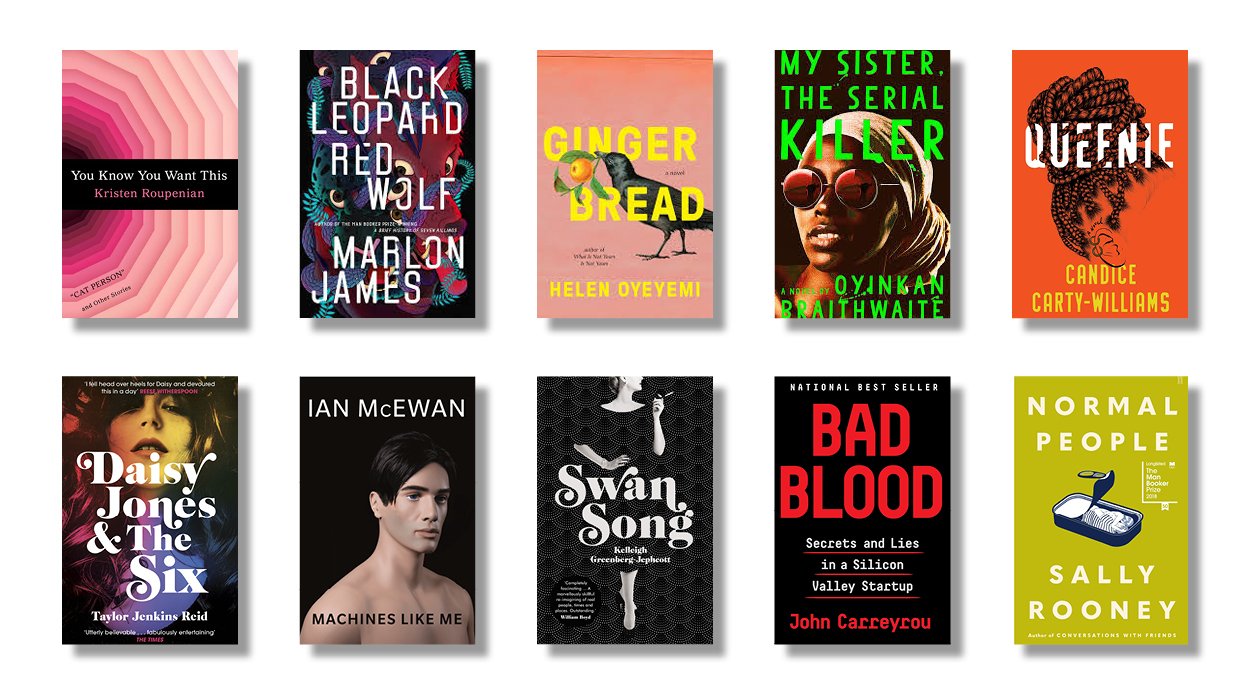 Because nothing that screams winter more than curling up with a stirring, gripping, rousing page-turner. Covering all genres and including everything from cursed gingerbread to riotous rock bands, these are the top 10 books you should be reading right now.

Normal People — Sally Rooney
You’ve likely heard of this Irish author already. Rooney’s debut, Conversations With Friends, grasped the attention of many a book worm in 2017, receiving rave reviews thanks to its distinctly intelligent, natural prose. Her second novel, another story about intense, complicated love, explores themes of social class, power and connection. It follows two teenagers, shy, withdrawn Marianne and popular athlete Connell, who begin an unlikely friendship in their small hometown in Ireland. NB: Normal People has just been snatched up the BBC, with filming for a 12-part series already in motion — we suggest you make time for Rooney’s written word before bingeing on the screen adaptation.

Swan Song — Kelleigh Greenberg-Jephcott
A skilled debut from writer Kelleigh Greenberg-Jephcott, Swan Song centres around American novelist Truman Capote, and his rise and tremendous fall in Manhattan’s high society. After two decades of intimate friendships with a gaggle of esteemed, wealthy and powerful NYC socialites, Capote publishes a literary bomb in the autumn of 1975: excerpts from his roman à clef, Answered Prayers, and with it the deepest secrets of the girls he had once so fondly referred to as his ‘swans.’ It was an unprecedented act of social suicide that still has us gripped today, and we guarantee you will gorge on Greenberg-Jephcott’s words in the same, insatiable manner as those who read Truman’s revealing works once did.

Gingerbread — Helen Oyeyemi
One for the lover of fantasy, this captivating modern fairytale is influenced by the mysterious, continuous place gingerbread holds in classic children’s tales. Using finely crafted sentences that are as haunting as they are addictive, Oyeyemi tells the story of a simple gingerbread recipe, and how it has been passed down through generations of British women: from Margot Lee to her daughter, Harriet, and now from Harriet to her daughter, Perdita. It is a simple beginning, but one that blossoms into a profound piece of magical realism laden with faraway lands, dolls that spring to life and enchanted confectionary.

My Sister the Serial Killer — Oyinkan Braithwaite
My Sister the Serial Killer’s first chapter is funny, confronting and murderous, but it’s only a taste of what’s to come over the succeeding pages. The novel follows Nigerian nurse Korede and her younger sister Ayoola —  the prettier, more favoured child out of the duo, who just so happens to have a nasty habit of killing her boyfriends. It is a compulsive read laced with dark humour and will keep you up long after bedtime.

You Know You Want This — Kristen Roupenian
Roupenian’s hotly anticipated debut comprises a compelling selection of short stories that are as twisted and as impossible to put down as those of the Grimm’s. The collection touches on a myriad of different themes, delving into sex, terror, punishment and pain, with an unwavering dark wit. While you would be a fool to skip out on any tale, be sure to make time for Cat Woman — this short story became a viral sensation after being published by The New Yorker back in 2017.

Bad Blood: Secrets and Lies in a Silicon Valley Startup — John Carreyrou
Those who found themselves drawn to the Elizabeth Holmes/Theranos scandal will love this stark piece of nonfiction. Put together by journalist John Carreyrou, this New York Times bestseller delivers the full, inside story of the rise and catastrophic fall of Theranos, the one-time multibillion-dollar biotech startup founded by Elizabeth Holmes. If you think you already know everything about this story, expect to be blown away — it’s even crazier than it seems.

Black Leopard, Red Wolf — Marlon James
The first of a planned trilogy, Black Leopard, Red Wolf is the fantasy novel that will have you waiting with bated breath for the second instalment before you even make it through the first. Described as an ‘African Game of Thrones’ by the author himself, this masterwork combines myth, fantasy and rich African history to deliver a breathtaking adventure, one with a supernaturally gifted mercenary and a missing child at its helm.

Machines Like Me — Ian McEwan
Like a thought-provoking Black Mirror episode but in the form of the written word, Ian McEwan’s latest brainchild offers an uncanny and disturbing look into our growing infatuation with Artificial Intelligence. The work of speculative fiction takes place in an alternate version of 1980s London, where deadbeat, employment-dodger Charlie purchases Adam, a newly crafted, AI-driven robot. Bought in part to impress Miranda, his distant, upstairs neighbor-cum-girlfriend, what follows is a messy love triangle that plunges the trio into an absurd moral dilemma.

Daisy Jones & The Six — Taylor Jenkins Reid
With a storyline based around a fictional 1970s rock group and its beautiful lead singer, Daisy Jones & The Six taps into our longstanding fascination with self-destructive, tortured musicians who succumb to the tumultuous life of rock and roll. A riveting novel, it comes as no surprise that it has already been picked up by Reese Witherspoon, and is soon to be adapted into a 13-episode series.

Queenie — Candice Carty-Williams
Queenie is the smart and decidedly funny debut by unflinchingly honest author, Londoner Candice Carty-Williams. It follows Queenie, a British-Jamaican woman verging on a breakdown, as she tries to navigate her 20s, a breakup, and her job in journalism. Described by The Guardian as “an important political tome of black womanhood and black British life”, this enthralling read navigates the storms of life, love, race and family with unique, adept precision.