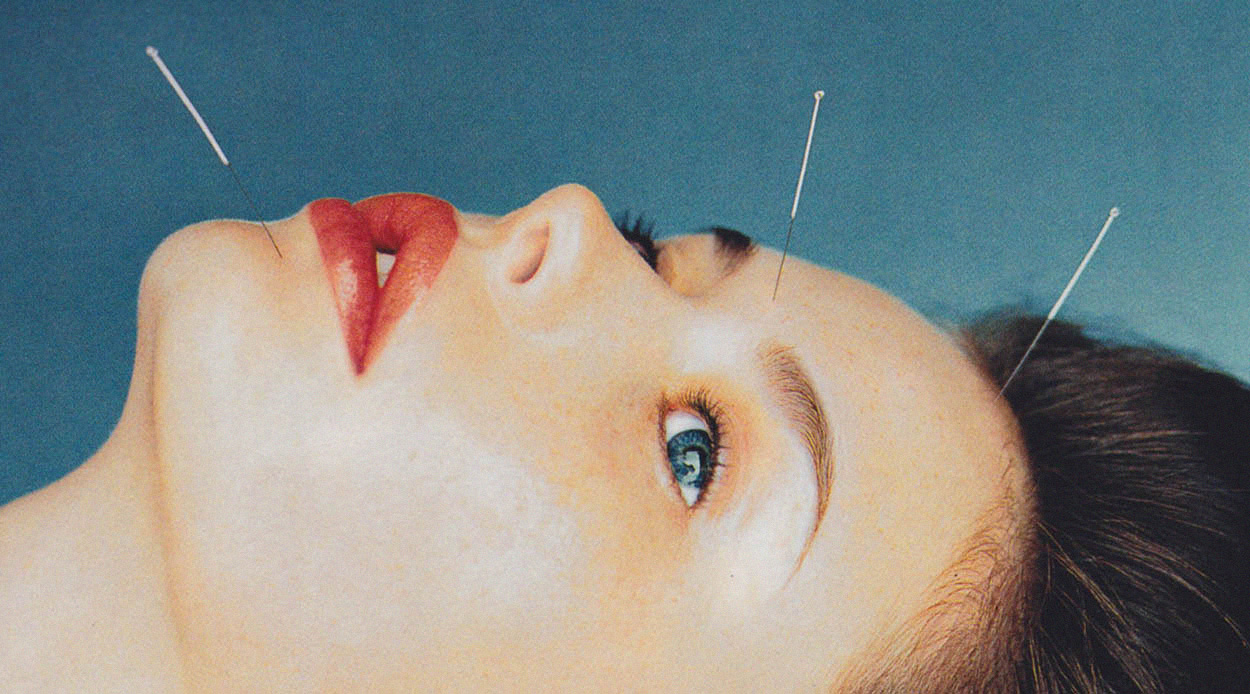 Long time readers of Denizen magazine will be well aware of my somewhat macabre propensity to subject myself to painful cosmetic procedures, all in the name of youth preservation. But 80 to 120 needles in your face at once? That’s quite possibly a new record, even for me.

With my increasing interest in natural medicines, and a desire for a more natural outcome to facial rejuvenation, the burgeoning trend of facial acupuncture as an alternative therapy seemed worthwhile investigating.

Traditional Chinese Medicine has been around for centuries. More recently, the art of facial massaging using a purposefully shaped piece of jade or rose quartz known as gua sha has grown immensely popular. But the ancient practice of acupuncture for its facial enhancing benefits is relatively new to New Zealand.

As an acupuncture virgin, I undertook some research. Being from the school of scepticism around natural remedies, I was interested to learn that the practice actually dates as far back as 221 BC in the Qin Dynasty when acupuncture and herbal medicines were provided for emperors and empresses to enhance their natural beauty and delay ageing.

I guess we humans haven’t evolved our penchant for seeking out eternal youth. But in modern times, cosmetic acupuncture hasn’t really become well-known among the general population.

Auckland-based acupuncturist Amy Chen of Origins Acupuncture has been practicing medical acupuncture for five years and has focused more specifically on the cosmetic practice for the past two years, to great success. Chen employs the Miso F.A.C.E technique, which is a Korean medical acupuncture treatment that is designed to naturally enhance and improve the skin’s elasticity and texture.

After our initial consultation, I learned that Chen uses needles that are extremely thin, 0.10 – 0.14mm, making them thinner than our hair (and much thinner than your typical acupuncture needle).

So while they are less painful to insert, it requires a serious degree of technique and training to ensure that each of the 80 to 120 needles she inserts into the face and scalp stimulates the muscle, fascia, acupuncture meridians, muscles along the meridians and the dermal layer of the skin. Thus improving the facial skin’s circulation and elasticity, giving a glow and gentle lift, that over time will result in long-term effective facial enhancements.

“Something to do” I say. A phrase I’ve been known to use on occasions when I’m feeling a tad nervous about what is to follow. Yet what does follow is far less intrusive than I anticipated. As I lay on the bed, Chen goes about inserting needles into the left side of my face, starting behind my ears and into my scalp — areas that I feel an immediate tightening from — followed by a customised-for-my-issues insertion of needles around my eyes, lips, cheeks and jawline.

I must admit, my first experience was a little challenging, purely because of the tightening I experienced. But Amy knows her stuff, and after filling half of my face with needles, she wisely and promptly shows me the results of what the needles have achieved. And I have to be honest, I was pretty gobsmacked.

The symmetry of my face was completely off. The side without needles is down and slightly droopy, with a very prominent nasal labial fold. While the other side, which is still filled with needles, is puffy, free of lines and wrinkles — definitely a vast improvement.

After all of the needles are inserted, I am left to lie in peace and quiet (or sleep as I have done on one occasion) for 20 minutes while the ancient mastery works its magic. At the end of this time, it’s a relatively swift process to remove the needles.

I’d conclude by saying that despite my long term propensity for the likes of Botox and fillers, there is a part of me that is tending towards procedures that result in a more natural outcome. The days of the pillowy lips, overly high cheekbones and waxy over-lasered skin are, I hope, behind us, or at the very least destined to be administered painlessly via phone filters.

Perhaps the ancient Chinese did have a point? I for one am sold on the idea of reducing the amount of rubbish I’m putting into my face and instead opting for a more natural approach.

Best in Beauty 2021: These super skincare products will have you glowing from head to toe