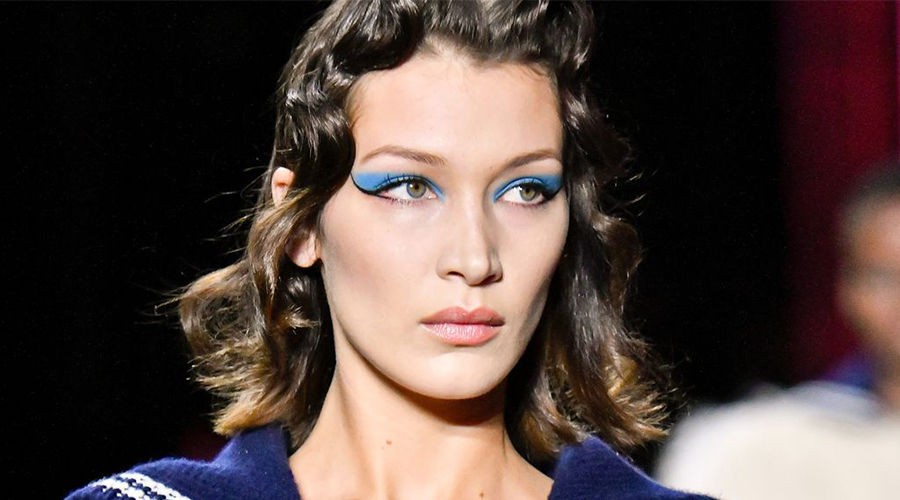 If there is one thing we’ve taken from the beauty looks at the past month’s fashion weeks, it is that fortune really does favour the bold.

Towering wigs
The most unexpected hair trends saw a specific homage to yesteryear: not the 80s, nor the 90s but, bizarrely, the silhouettes of the 18th century. Over at Moschino, models balanced wild wigs that were heavily reminiscent of the gargantuan hairstyles made famous by Marie Antoinette, while Thom Browne sent his models down the runway with equally-as-lofty, black silicone-painted styles, (which were covered with black veils) paired with ruffled bloomers and powdered faces.

Headbands, but upside down
The statement hair accessory craze is here to stay. In fact, the trend just intensified in a way we couldn’t have predicted. The likes of Fendi and Badgley Mischka dished out novel takes on everybody’s favourite headgear, the classic headband, by flipping the whole concept quite literally on its head. Fendi’s models wore upside-down headbands tucked beneath decoratively intertwined buns, while Badgley Mischka paired their glitzy iterations under neatly contained buns.

Silver
The catwalks of the autumn-winter shows had actual silver linings, with the shimmering hue adding a touch of sci-fi to everything from hair to makeup. The eyelids of the Emporio Armani models were glazed with one line of silver metallic shadow, while Erdem’s silver aesthetic was out of this world in every sense, on models with slicked silver hair and silver-foil adorned eyes.

All that glitters
Judging by the upside-down confetti glitter shadow seen at Vivetta, or the models’ faces doused in glitter by Marni, and the crystal-studded looks sported at Giambattista Valli, or Ulla Johnson highlighting soft, fairy-dusted lids while Alice & Olivia took to 70’s-inspired glitter-slicked disco eyes — it’s clear that makeup this season should shimmer with anticipation. Stick-on crystals, glistening shadows, and sparkling face glitter are all makeup essentials this autumn.

Bold red lips
Regardless of the never-ending conveyor belt of new lip products that are birthed each year, all boasting fresh and kaleidoscopic shades, nothing will ever beat the exotic classic red lip. At both Saint Laurent and Jil Sander, fresh faces bore minimal makeup to allow the bold lip to hold centre stage, while the likes of Marc Jacobs and Jason Wu respectively paired the same look with either a classic winged liner or a simple slick of mascara.

Graphic Face Art
With faces showcasing graphic eyeliner, pen-like scribbling and an unexpected emotional twist on beauty, some of the runway looks were less like makeup and more like creative works of art. At Gucci, models were sent down the runway with mascara tears streaming down their faces, while both Rag & Bone and Yohji Yamamoto adorned faces with dramatic black lines and angular shapes around the eye and nose area.

Bold Braids
Whether cascading down the neck onto the back, or elegantly worked into a fishtail style, intertwined with ribbon, or bundled into a large rope-like bun, the many styles of braids are having their moment.  While myriad forms of the plaited statement-hair graced catwalks — spotted everywhere from Fendi and Chromat to LaQuan Smith and Rebecca Minkoff — still, none stuck to the classic, tidy, pared-back look. Instead, braids have been given a bigger silhouette and a much bolder upgrade.