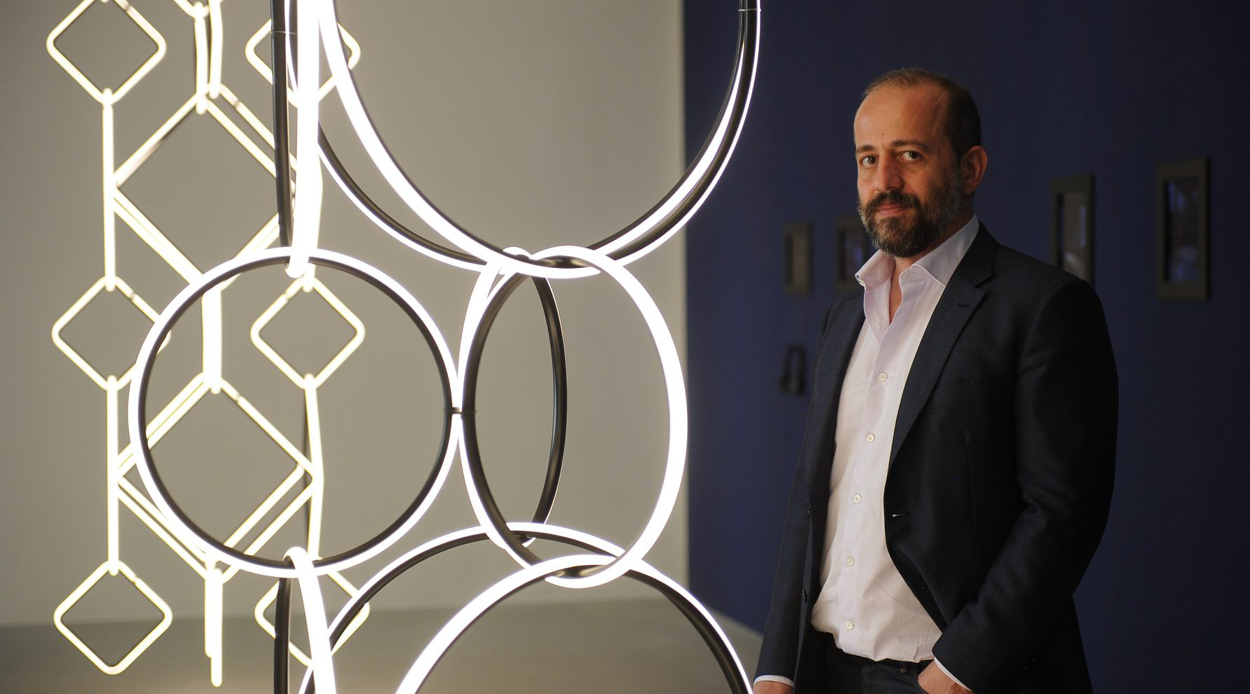 Arrangements by Michael Anastassiades for Flos at Milan Design Week 2018

Born in Cypress but based in London, where he studied industrial design and engineering at London’s Royal College of Art and Imperial College, and where, in 1994, he first launched his own design studio, Michael Anastassiades is a designer whose impressive career spans more than 20 years. Over that time, Anastassiades has honed a practice that spans products, spatial interventions and experimental works, proving his prowess as much in industrial production as in artisanal techniques and establishing himself as one of those rare designers able to create products that are luxurious and meticulous, while always maintaining an element of simple practicality. For him, timelessness and lasting design is the underlying goal.

Of course, if you know anything about this designer, it’s most likely to be his work with lighting. Anastassiades has cultivated a stellar reputation for lighting design that combines simple, geometric shapes (think tubes, oblongs, spheres) with materials like polished bronze and mirrored glass. Lights like his series for Flos, are made to appear as though standing at odds with the laws of gravity — orbs perched awkwardly on angular stands, or hanging off a rod, attached, apparently, to nothing. He is masterful at playing with moments of tension in his work, so that to look at one of his pieces is to question everything you think you know about construction. So revered is Anastassiades for his lighting, in fact, that its these kinds of pieces that now make up around 80 percent of his studio’s commission work.

So, in the interest of giving you a crash course in design history, and hopefully imbuing those pieces you might have sitting in your living room with a little more context, we have rounded up four interesting things to know about this prolific designer — available locally from ECC.

1. He fell into design accidentally
Originally, Anastassiades wanted to be an artist. But to appease his parents’ expectations, he enrolled in the industrial design and engineering courses that would inevitably prove the gateway to his career. And while it’s hardly surprising that creativity had been his calling from a young age, design was never a straightforward prospect for him. Ironically, it was likely this sense that he didn’t fit the traditional ‘mould’ of design that ultimately gave Anastassiades such a unique perspective and approach to his work (and ultimately contributed to his success).

2. He stands at odds with the idea of ‘newness’
Speaking with Dezeen last year, Anastassiades explained that, despite the fact that the nature of his work was to create new products, his attitude was (rather paradoxically) that “nothing in this world is new… not even ideas.” Instead, Anastassiades acknowledges that while ideas already exist, there is a creativity in finding the qualities that make them timeless, that extend their relevance over a longer period. It’s this attitude that has resulted in Anastassiades’ focus on design that truly lasts. And really, when you look at his lighting work, many of the pieces he has created would be suitable in a range of trends and times.

3. His collaboration with Flos was a turning point
Some of Anastassiades’ most recognisable work, and the pieces we have become so familiar with from seeing at ECC, are the lights he designs for Flos. Teaming up with the renowned Italian brand allowed Anastassiades to pair his design experience with a newfound sense of freedom, thanks to the larger scale he was afforded. It’s hardly surprising then, that his Flos collections seem to garner such widespread acclaim — they are the perfect expression of this Anastassiades’ design philosophy.

4. His work sits in a number of internationally-revered permanent collections
Anastassiades work can be seen in the permanent collections of institutions like the Museum of Modern Art in New York and the V&A Museum in London. It has also, in the past, been showcased in exhibitions at globally-renowned galleries like London’s Institute of Contemporary Arts, the Design Museum, Somerset House and Sotheby’s.