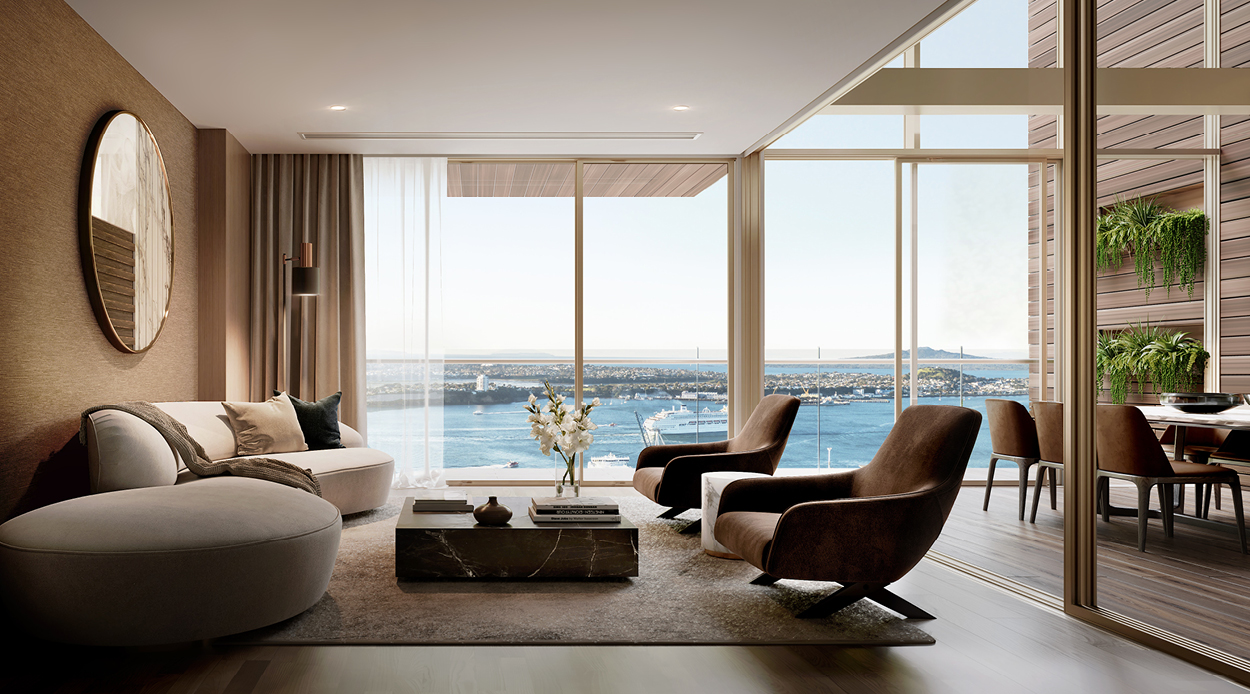 Auckland City is growing up. With high-quality retail, hospitality and cultural offerings arising alongside its burgeoning population, Auckland’s development has seen a call for accommodation that meets the needs of its discerning inhabitants. Enter Seascape.

The new Downtown development situated on Customs Street East is set to be the city’s tallest residential tower and is promising unprecedented, inner-city living. From its striking Peddle Thorp-designed facade of angular glass and a sculptural lattice mega-brace to its impressive, grand lobby flanked by retail tenants, Seascape offers the kind of luxurious lifestyle one would expect to find in cities of a much larger scale. A pool and fitness centre, for instance, will provide residents with on-site, health-focused amenities. While an elevated outdoor terrace is set to become a hive of after-dark activity.

But aside from the obvious visual appeal and various on-hand conveniences, where Seascape really pushes ahead of the rest, is in its residences. Particularly, its two-bedroom duplexes, where apartment living is given a spacious new face.

Situated over two stories with a combined floor area of 152 square-metres, these apartments are framed by soaring ceilings, timber flooring and impressive, floor-to-ceiling windows that flood their open-plan living spaces with natural light. In the heart of the apartments, a double-height (six-metres-high) atrium can be utilised as a breathtaking dining room or all-seasons ‘winter garden,’ able to either be opened onto an unenclosed balcony via sliding glass doors or remain closed to the elements. The lower level of the duplex apartments also features a study (large enough to fit a double bed), a bathroom, a laundry and a sleek, contemporary kitchen fitted out with a line up of state-of-the-art, integrated appliances.

But the magic of this layout really lies in the novelty of split-level living, and upstairs, the luxury of Seascape’s duplexes is taken to new heights.

One bedroom and one master suite, both with their own ensuites and the latter with a walk-in-wardrobe, reside on the upper-level of the residences. Showcasing assiduous attention to detail, the refined, modern bathrooms offer under-floor heating, bespoke vanities with functional storage space and wall-mounted designer tapware.

In the bedrooms, opulence meets calm sophistication as the timber details, plush finishes and carefully-realised fittings (like custom headboards) combine to offer an air of pared-back luxury. Both bedrooms boast their own private balconies, an open-air one off the master suite and one that looks onto the atrium off the other, both providing a level of privacy not often found in the modern apartment.

With 10 of the two-bedroom duplexes available, Seascape also offers studio, one-bedroom, three-bedroom and penthouse apartments, and is proving itself a pioneer in Auckland’s luxury accommodation scene. Answering the city’s call for a new style of living that more accurately represents Auckland’s growing, urban identity, Seascape’s arrival is indicating the dawn of a new cosmopolitan era and is set to be one of this city’s most prestigious addresses.