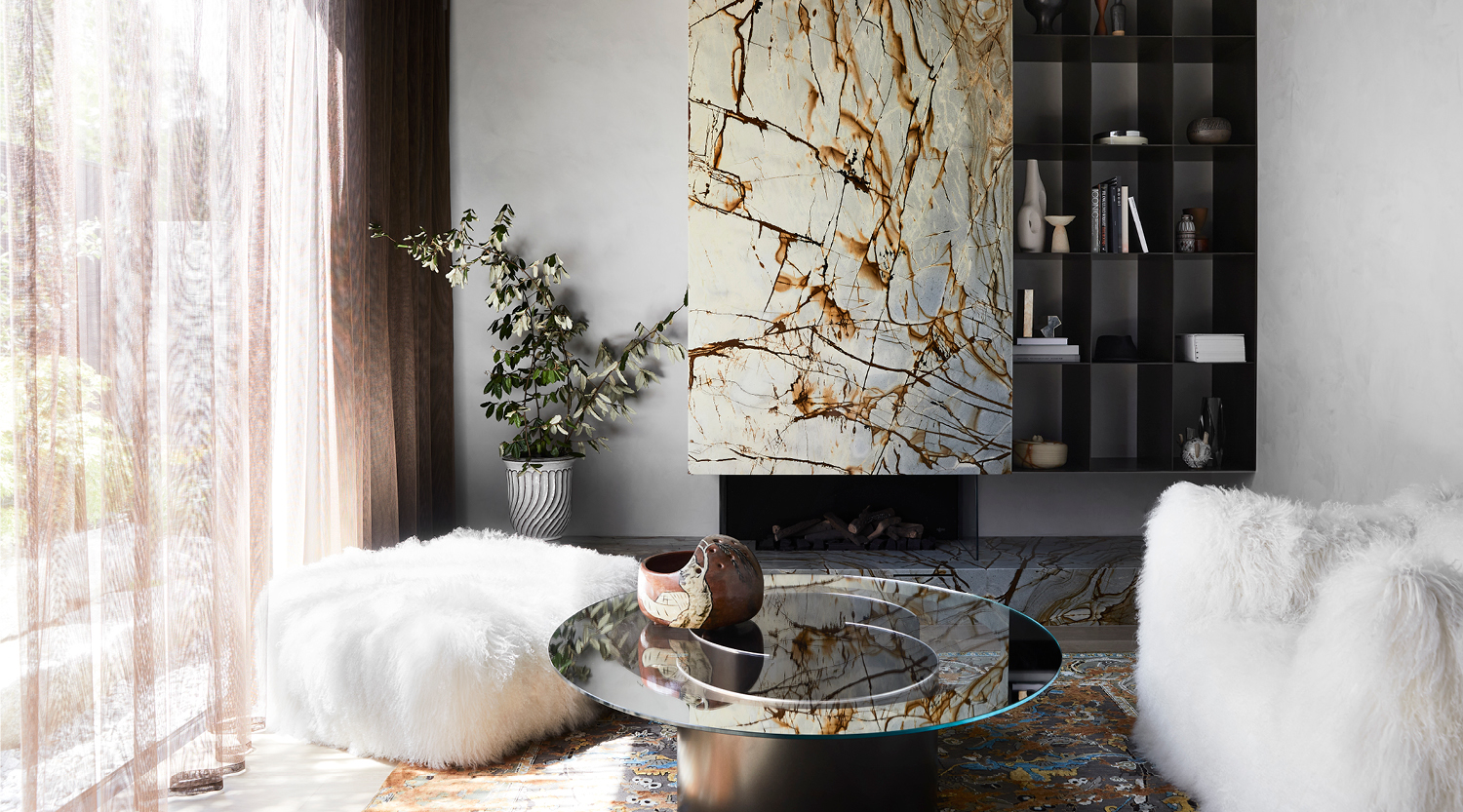 Juxtaposing textures make for a multifaceted space, with the B&B Italia Le bambole 07 armchair and ottoman by Mario Bellini. Available from Matisse

In working with Seidler Architects and Golden interior designers to create this landmark Melbourne home, a couple with teenage children sought something that exceeded expectations. On the one hand, as Golden directors Kylie Dorotic and Alicia McKimm articulate, “[the clients] wanted something very special and stand-out,” while on the other, ensuring that it was still liveable and functional, and didn’t feel intimidating despite its size.

It’s no mean feat to temper spectacle with practicality, or reconcile the idea of an exquisite entertainer’s pad also being a functional family home with spaces that feel simultaneously expansive, connected and intimate. But, via Golden’s meticulous use of texture and perfectly-proportioned furnishings, it would seem the devil is, indeed, in the detail.

The creative process was inherently collaborative — the architects, designers and homeowners working harmoniously — which is obvious in the outcome. The Brighton Residence is a spectacularly bold residence across three levels, and combines intriguing finishes with details that demand a double-take and spaces that are welcoming, but also multi-faceted, robust and sure to stand the test of time.

Being a new build, this home is deeply personal, every inch of it infused with the character of its owners and the dynamics of their family. The inclusion of two bars, for example, one in the kitchen and one at basement level, reflects the owners’ penchant for entertaining.

The harnessing of natural light via an internal courtyard and the clever use of windows, alongside putting the pool in a prime position around which the house wraps, speaks to their desire to create space within the home — and bring the outdoors in. While considered materials work to cultivate a sense of warmth in areas that are sumptuous without ever erring into over-the-top territory, and inherently family-oriented.

Standout features like the stoic kitchen bench and the blue stone fireplace are given centre stage by the neutral palette and elegant furnishings that surround them. Luxurious sofas and chairs introduce curvature to contrast with the confident textural choices and straight structural lines that recur throughout the house — everything executed in accordance with the owners’ focus on superior quality.

Even the joinery has had artificial lighting built into it, enhancing the areas with less access to natural illumination. The lighting is programmed for different times and moods and, with no traditional switches at all in the house, is entirely controlled by the family’s smartphones.

From the master bedroom, a glamorous space designed after a hotel suite with heavy, velvet curtains and a champagne nook in the corner, to the basement, with a translucent onyx bar, a lounge, a dance floor, a temperature-controlled wine cellar and a window offering an underwater view of the pool, this home gives the ‘entertainer’s paradise’ a sophisticated reimagining without ever forgetting the essentials of a family home: cosiness, functionality and warmth.