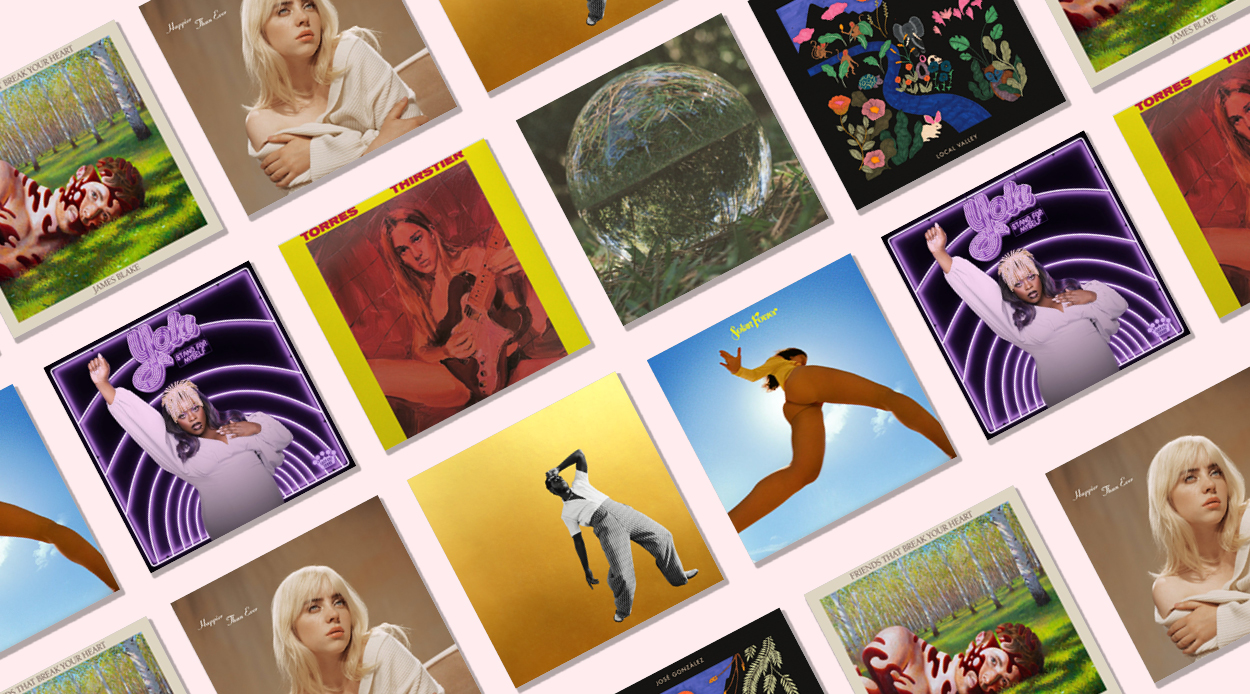 Music has the power to transport us far away, a fact we’re embracing with utmost enthusiasm currently. From smooth, dreamy pop to groove-worthy soul and experimental electronica, broaden your sonic horizons with this excellent selection of recently released albums.

Gold-Diggers Sound by Leon Bridges
The soulful singer-songwriter is back with an evolved sound, his third album since his lauded 2015 debut Coming Home catapulted him to stardom. The romantic, ethereally-layered tracks on this R&B album call to mind the hazy days of summer, with guitar-led moments as well as a slight jazz influence. It will have you staring dreamily into the distance as you let Bridges’ honeyed voice transport you elsewhere.
Song to start with: Motorbike

Inside (The Songs) by Bo Burnham
If you were looking to find not so much escape in your chosen soundtrack but more an album that speaks directly to the experience of lockdown, then look no further than this. Comedian Burnham (who is also an actor, you’ll recognise him from the film Promising Young Woman starring Carey Mulligan) is known for his musical comedy, and while isolating inside his house he created one-hour Netflix special Inside — an array of musical skits that have proven to be not only bleakly hilarious but incredibly catchy. Now, you can listen to the songs in album form.
Song to start with: Welcome to the Internet

Stand for Myself by Yola
It’s impossible not to groove to this eclectic album from British singer-songwriter Yolanda Quarterly, which mixes inspirations from 60s and 70s pop, gospel and even country ballads to offer a richly varied and well-crafted record. The golden thread is Yola’s goosebump-inducing, powerhouse voice, equally at home over thrumming electric guitars as it is over upbeat trumpets.
Song to start with: Stand For Myself

Thirstier by Torres
A joyous chorale of a release, this new album from indie star Torres (real name Mackenzie Scott) hinges on driving, alt-rock anthems that often incorporate slick, electronic production and theatrical yet skilful vocals. The result is an inherently assured finished product, with moments of gentleness interspersed with high-powered crankers that will have you listening on full volume.
Song to start with: Kiss the Corner

Leave Love Out Of This by Anthonie Tonnon
Whanganui-based musician Anthonie Tonnon is known for his poetic take on melodious alt-pop and his immersive live performances. His new album is a goodie, rich and heartfelt, with the title track ‘Leave Love Out Of This’ having been nominated as a top 5 finalist for this year’s APRA Silver Scroll awards. Tonnon had announced an album tour to commence country-wide from the 22nd of September, and while Auckland may not be able to host his show (depending on alert levels) hopefully the rest of the tour can still go ahead elsewhere. In the meantime, give this excellent album a spin.
Song to start with: Leave Love Out Of This

Happier Than Ever by Billie Eilish
Unbelievably, this is only Billie Eilish’s second full-length studio album. The global phenomenon wields her incredible voice with more power than ever on this record, as she reflects on the ups, the downs and the downright ridiculous nature of mega fame, all with the originality that first made her a star.
Song to start with: NDA

Vince Staples by Vince Staples
Touted his most personal and accessible album yet, this eponymous release from Vince Staples is still drenched in the California rapper’s idiosyncratic, left-of-centre approach. In his characteristic lazy drawl, he delves deep into his troubled life and its perturbing contrast with the fame he now has, juxtaposing darker lyrics with chill, hazy beats that will still have you grooving along despite the subject matter.
Song to start with: Take Me Home

I Know I’m Funny haha by Faye Webster
The fourth album from Atlanta singer-songwriter Faye Webster is an enchanting and sometimes melancholic listen, calling on influences of country, soul, classic rock and indie-pop. Overlaid with her mellifluous voice, it’s easy to see why the album’s opening track Better Distractions made it onto Obama’s 2020 end-of-year favourite songs list when it was released as a single, and the rest of the album is equally as lovely.
Song to start with: Better Distractions

Solar Power by Lorde
After a four year hiatus, the highly-anticipated return of our biggest musical export does not disappoint. More acoustically-minded than her previous albums yet just as compulsively listenable, Solar Power ushers us outside to appreciate the beauty of nature and touches on a range of subjects, including the slightly wild, salt-crusted joy of summer, the irrefutable reality of ageing, the nature of celebrity, and wellness culture. With Yelich-O’Connor’s luminous prose forming quintessentially ingenious lyrics, she lets listeners in on her journey over the intervening years since Melodrama, and how much she’s evolved.
Song to start with: Fallen Fruit

Spiral by Darkside
The collaborative project of electronic musician Nicolás Jaar and multi-instrumentalist Dave Harrington, Darkside’s highly anticipated sophomore album builds on the duo’s moodily confident, experimental sound. Lazily grooving guitar melodies drive a hypnotic beat, atop thrumming and eclectic base and percussion, and the result is quintessentially boundary-pushing.
Song to start with: The Limit

And get excited for these new releases, coming very soon:

Friends That Break Your Heart by James Blake
Moving away from the introspection that has marked many of his previous releases, Mercury Prize-winning musician and producer James Blake describes his fifth studio album as “led by feeling”. Dropping in full on the 10th of September, the record will showcase Blake’s famously angelic voice and heady production in a whole new light.
Song to start with: Say What You Will

Local Valley by Jose Gonzalez
Utilising his instantly recognisable, plucky guitar and layered vocals, Swedish musician Gonzalez returns with his first full-length album since 2015. Arriving in full on the 17th of September, Local Valley’s initial singles are timely in their subject matter, touching on togetherness and understanding humanity’s place in the universe.
Song to start with: Visions