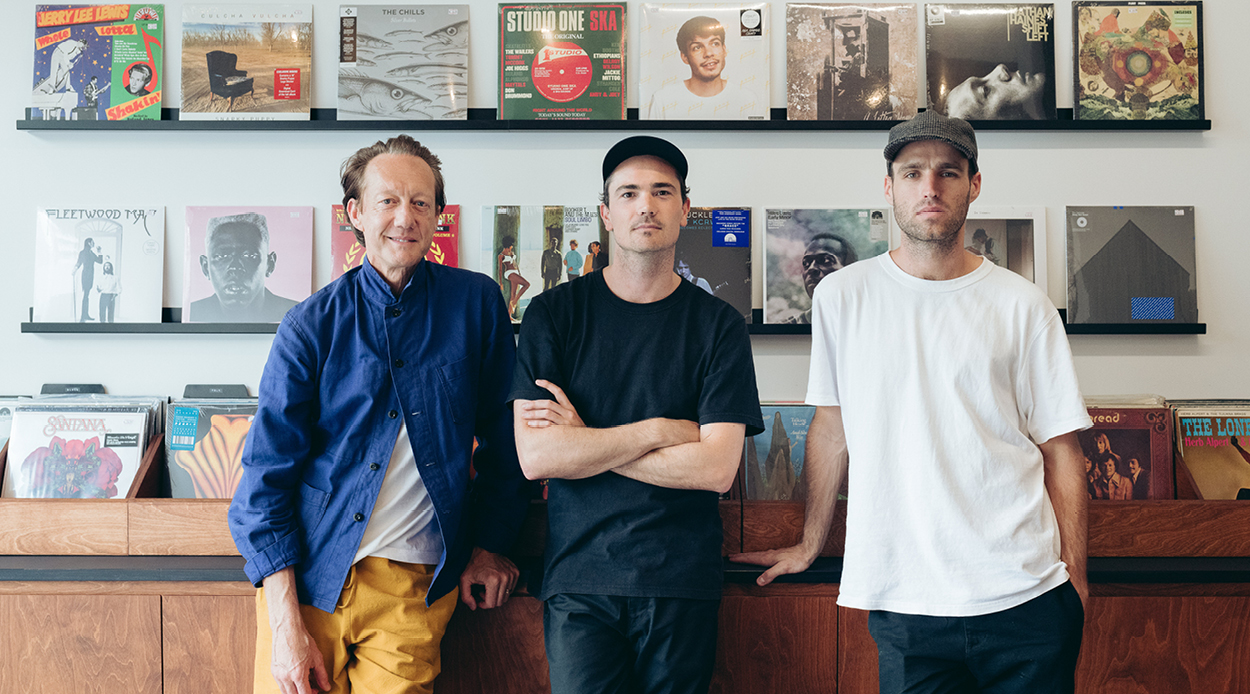 The music industry is notoriously difficult to crack, particularly in a small market like New Zealand. Young entrepreneurs Ben Wallace (BW) and Joel Woods (JW) have broken through barriers with their wildly successful vinyl pressing business, Holiday Records. Here they discuss the challenges and triumphs of making it in the music industry with one of the country’s most successful musicians, Nathan Haines (NH)

How did each of you find your way into the music industry?
JW: Nathan is going to have a far more exciting answer than ours…
NH: Not necessarily! People already know my story. Plus, I’m an artist; with you guys, this is different.
BW: I was in a folk band a couple of years ago, and we wanted to press physical because it suited the music. I did some digging, and found I couldn’t get it pressed in New Zealand, so I went to the one person who pressed in Australia, and they were so slammed that they couldn’t even talk to me.
JW: That was when alarm bells started going off.
BW: So Joel and I went on a research trip to North America, and realised there was an opportunity to bring a pressing plant over to New Zealand. We teamed up with a company in Canada, who had pretty much just reinvented the wheel of record pressing by inventing this automated record press, which makes it easy for rookies to press. And we gave it the green light.
JW: In terms of the retail business, we decided to be based in Central Auckland because we realised that people are interested in the process — it’s fascinating. We smashed out a brick wall and put a window in so that people can see through to the plant.
NH: It’s like when restaurants decide to show the chefs.

How does living in New Zealand affect your work — do you feel there are more opportunities overseas?
NH: I mean for me, absolutely. Although things have changed since I started — that’s my journey. But there’s been other people, like Freddy’s [Fat Freddy’s Drop], that have done the most amazing job, just by being in New Zealand.
BW: Six60’s another one.
NH: I think it’s very different for young people now, although I would still recommend to every single musician to get out of New Zealand. Even if it’s just to spend four or five years away, to then be able to really appreciate what they have at home. But then again, there was no Internet when I left, so I felt as though I had to move.

And, of course, the Internet has completely changed how people enter the music industry.
NH: Yeah. I think New Zealand as a country has got a much higher profile than it did when I left. When I went to New York, people had never even heard of New Zealand. They might have heard of it through various things — America’s Cup, Peter Jackson, Flight Of The Conchords… and Lorde — but that’s it.
BW: (laughs) Yeah, they’re like: ‘is that Eastern California?’
NH: So it’s great now, New Zealand has an international profile, and now people know a little bit more about our country.
BW: I think, in terms of pressing plants, the Internet has helped because it killed off CDs, and flooded people with digital. But then, because people are so overloaded with digital, they have gone full circle and are now wanting the physical.
NH: Yeah, if you really like an album, and you’ve been streaming it loads, then you will get to the point where you want it.
BW: And if you like the album, you’re only seeing it on a tiny thumbnail on Spotify. But you want to be able to hold that 12” sleeve and be able to feel it and smell it and put it on — that’s really helped us.

What advice would you give someone trying to enter the music industry?
NH: To learn music, and to get good legal advice when you sign contracts, which I didn’t do. And that’s really important. Just get as much advice as you can, because… I would have done things differently.
BW: And if you want to get into music, not from a performance side, you need to find something that’s not flooded. We were lucky, we were there at the right time, and we found a niche that no one was doing at the time, and we got in.
JW: If you do get an impulse, just go for it. Just work your arse off and go for it. There are no two ways about it.

What challenges did you face along the way? Surely there were
some doubters who couldn’t see your vision…
BW: Yeah, absolutely. You know, Joel and I were 27 when we started.
JW: And people were going… 27-year-olds trying to press vinyl? Are you serious?
BW: We get it all the time, we were told we were crazy, but luckily we had support from close family, which really grounded us. You should never be worried about what people think about you. If they’re laughing at you, what are they really doing themselves?
JW: Failure is a big thing to use as motivation, too. Because it’s not always going to be smooth sailing, at the start of your business, or being a musician. Everybody makes mistakes, just learn from it. It’s going to be hard… but if it wasn’t, everyone would do it.

What are some common misconceptions people have about the music industry?
NH: People used to think that, when you signed a contract you would be instantly rich. People also think that, when you’re standing up on stage, you’re just really into it. They have this misconception about musicians just standing there and getting really emotional, but it’s not like that, you have to get very technical. You can’t get too emotional, otherwise, it just ruins it.
JW: Yeah, nobody talks about the hours you spent in your bedroom learning the sax.
BW: For us, the thing that people don’t really understand is that it’s a craft, it’s not just having a printer and pressing a button. Yes, it’s an automated machine. But one of us is on it the whole time, there are a lot of moving parts, like having to change the steam settings and the cooling settings. You have to find the balance. But it’s the hardship in pressing a record that makes it so beautiful — it’s a made thing, made with blood sweat and tears. Mainly tears…

And Nathan, have you accrued a selection of loyal fans over the years?
NH: Absolutely —
BW: — (laughs) Like Joel’s dad. When we first told Joel’s dad that Nathan was playing a record, he was like “Oh my god! F-ck off, he’s been my idol for years.”
NH: (laughs) But no, for sure. Lots of friends that I’ve met….
BW: Stalkers?
NH: (laughs) No, it’s very humbling, you know. I just sent two records today to a guy in Alabama. He got hold of me through Instagram and asked me if I have any vinyl. And that happens every week, people contacting me. I’m really amazed that people might be into a record that I made 20 years ago.
BW: And obviously that goes back to the Internet — he might not have ever been to a gig, but he’s seen him online and he’s like ‘holy shit, this guy’s fucking awesome.’
NH: Yeah he wouldn’t have seen me live. I’ve also got a new track out, with these young guys from the CBD, and because of it, I’m picking up all these young people, which is amazing for me. They’re doing what I was doing almost 20 years ago. Even down to the same style of music.

I’m sure that when you started out, you never thought that you’d be appealing to such a younger demographic 25 or so years later?
NH: Yeah, it’s great. That track I did with Marlena Shaw? Squire For Hire? I did that for her then, and now these guys are doing it for me.

If you had not succeeded, would you still be in the music industry?
BW: I wouldn’t like to say we’ve done well… we’re still in the proving ourselves stage. If we talk in two years time and we’re cracking it then maybe I’ll have something to say…
JW: One thing that we said at the start is that we actually like how hard this is. Because no one else is going to be stupid enough to do it…
NH: And for me, that’s a hard question to answer. I still feel like I’m just beginning, to be honest. I’m just trying to upskill at the moment, I’m sort of at a level where I can mix now. I’ve been trying to do that for my whole life, but for the last six months, I’ve just been doing it every day until I get it — it’s all about just getting over your fears.
BW: And I don’t think there ever really is a destination. A lot of people are like ‘I want to make it’ but then when you get there, there is no destination, there is no endpoint, because when you get to a place you’ve always wanted to be, or you meet a certain goal, then you want to go further. I imagine with Nathan it was like: “I want to learn the sax… I want to write my own song… I want to have an album… I want to tour the world’ you know, and same with us. You can’t be reaching for something, because it’s just about the journey. That’s why it’s important to enjoy every day of it, because if you’re stressing about trying to get somewhere then you just get blinded. Enjoy the journey.
NH: (laughs) Holiday Records, enjoy the journey.

Is there any advice that you can give to each other?
BW: Me giving advice to Nathan Haines? Are you f–cking kidding me? Erm, press some records with us? Enjoy the journey?
NH: I think, enjoy the journey really is a good one. Because day in, day out, you have to enjoy it. And be true to what you guys stand for. And, you know quality is one thing.
JW: Yeah, massive.
NH: Because your whole reputation is based on quality.
JW: Especially with physical music.
NH: That’s what separates you from someone else.