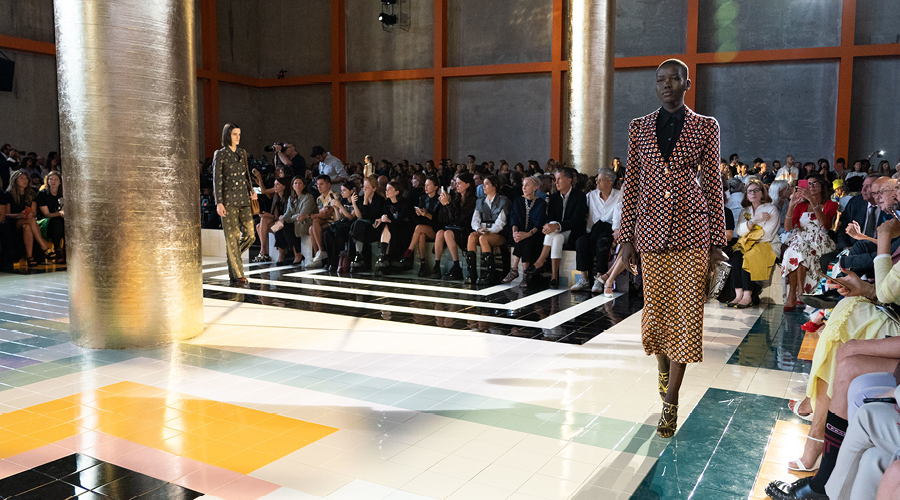 Miuccia Prada has become known for creating bold collections that build on a foundation of controlled eccentricity. Who could forget the flaming wedge-heels? Or the oversized hats of Resort ’19? Or the brazen Alice bands that became the cult piece for a while? In short, Prada can usually be relied on to deliver pieces that make us say ‘oooh’ and ‘aaah,’ and marvel at the brand’s ability to tread the line between elegance and gaucheness with expert precision.

But for Spring 2020, it would seem Prada is shifting the focus from creating clothes that make their own, autonomous statement to offer pieces that instead, allow the wearer to take centre stage.

Of course, the collection carried the inherent DNA of Prada in its characteristic attention to detail. The set offered a colourful, geometric melange of orange paint, gold foiling and modern mosaic tiling, while the clothes themselves featured pops of pattern, embroidery and moments of luminescence. But beyond that, the collection felt immediately wearable. Fine, knit pieces met elegant, tailored blazers and below-the-knee skirts. It was almost an ode to the office worker, were it not for the line-up of floppy bucket hats that we’re naming a major early contender for street-style infamy in the seasons to come.

See our favourite looks below…