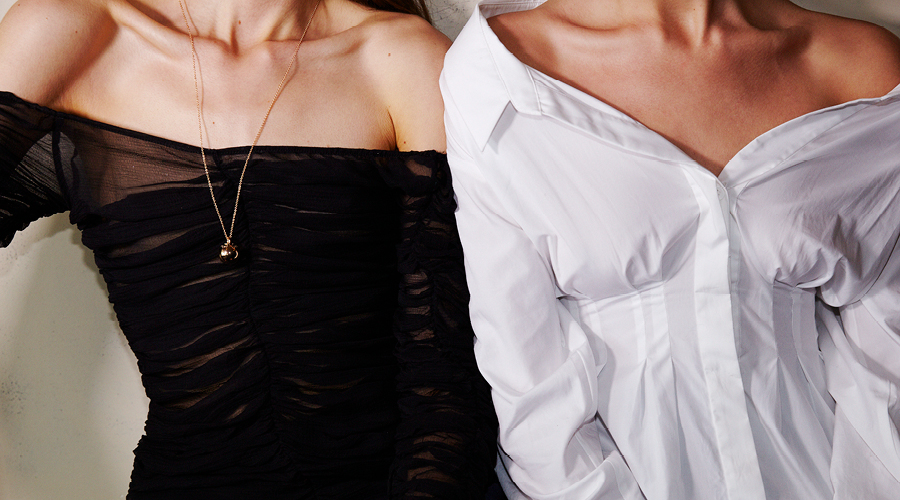 There’s something about a neckline that often speaks to the character of the person wearing it. So whether you’d opt for a high-necked, off-the-shoulder, batteau or sweet-heart, what does your favourite cut say about you?

Shirt collar: She’s a businesswoman and she’s not afraid to don an aggressively pointy collar to prove it. Boyfriends beware — she’ll steal your shirts and wear them better than you ever could.

Ruffled: Her Pinterest board is littered with grainy black and white photos and she revels in Victorian novella. Not afraid of being called ‘extra,’ she pulls off flouncy detail better than a dandy in Louis XIV’s court.

Turtleneck: Sleek, chic and often caught sporting a low bun, she is most likely some kind of designer but dabbles in illustration or maybe, I don’t know, architecture, on the side. She is cultured (but is chill about it).

Off-the-shoulder: Always the most elegant person in the room, she could close her eyes and pick anything out of her wardrobe and still look like she was about to chair a board meeting — and sometimes she does. Her approach is timeless, her décolletage infamous.

High neck: When Tidying Up with Marie Kondo first aired she scoffed because her system was better. With an undying love for Japanese designers and a subscription to Monocle, she’s as meticulous as she is savvy.

Sweetheart: A self-proclaimed girlie girl, she loves a sweetheart neckline as much as she loves the following: novelty cupcakes, KUWTK, tagging people in memes and saying ‘actually me though’, horoscopes, Beiber, mugs that say ‘But first, coffee,’ and Youtube tutorials.

Crew neck: She’s cool, she’s nonchalant, she really does wake up like this. She has mastered the art of throwing on a T-shirt with jeans and looking like she’s backstage at Paris Fashion Week. When she says she’s ‘not high maintenance’ she really means it.

Plunging: She’s daring enough to opt for a neckline that carries a very real risk of wardrobe malfunction. But she doesn’t care. Because she can handle the heat. She does Cross-Fit, she asks guys out and she orders whisky neat just for the hell of it and once, she smoked a cigar and didn’t hate it.