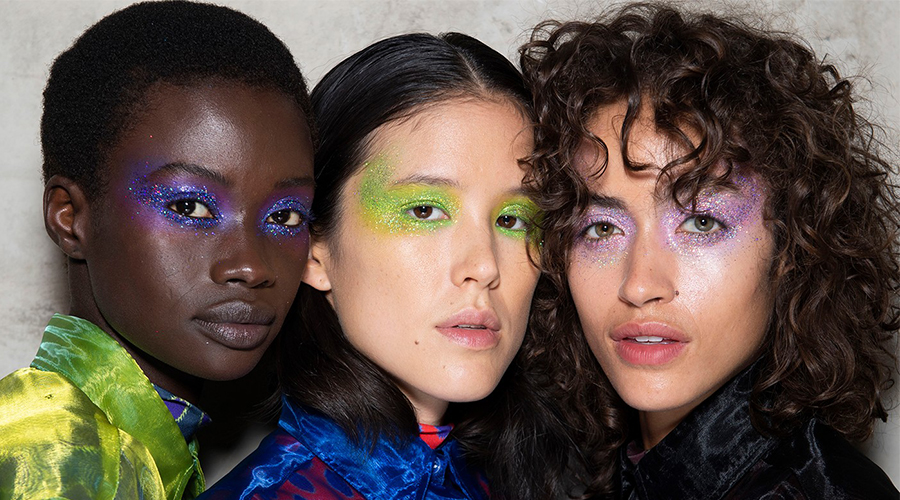 From graphic lined lids to the resurgence of classic Brit punk, London Fashion Week s/s 2020 dished out creative inspiration in spades — these are the six biggest takeaways.

Hair accessories
The reign of the humble hair accessory isn’t set to cease anytime soon. Simon Rocha opted for bold and brash adornments via an array of spiked and studded silver headbands and pins, while Bora Aksu kept it simple and feminine with a medley of elegant fresh flowers. Elsewhere, Erdem embellished braids with loose, black ribbons.

Graphic Eyeliner
An ultra-modern take on the classic eyeliner sees a more graphic approach, found at the likes of Victoria Beckham, where models were given a simple, slick line in varying hues, Matty Bovan, whose make-up artist created deconstructed lines from the inner eye to the brow bone, and Simone Rocha, where ashy, black strokes took centre stage.

Punk aesthetic
From the smudged out black lips — paired with razor-thin black eyebrows — at Molly Goddard and the PVC styled glossy black lip at Marques Almeida, to the thick, bold, black liner at Roberta Einer, it was a serious punk revival that dominated the beauty looks this season.

Side Parting
London Fashion Week shined a spotlight on the classic side part, with deep comb-over type styles spotted everywhere from Ports 1961 — where a sweeping part was rendered breezy and effortless — to Marques Almeida — where a more extreme route was taken, with deep side parts and hair that covered half of the model’s faces. Preen and Marta Jakubowski sported the style too, the former kept it simple and side-swept while that latter gave the look a graphic update via large chunks of hair that were left loose from the bun.

Glitter eyes
Disco isn’t dead, at least according to this year’s runways. Smatterings of glitter adorned the eyelids of models everywhere from Halpern to House of Holland, the former of which saw Diana Ross inspired black glitter-shadowed lids while the latter went full Euphoria, with saturated glitter covering the entire eye, from the eyebrow to the top of the cheek, in holographic hues.

Braids
Just like hair accessories, the classic braid is a schoolgirl style that isn’t going anywhere anytime soon. Over at Bora Aksu, hair was parted into twin plaits and kept loose and whispy, while Erdem paid homage to photographer Tina Modotti via strict, centre-parted hair in a low slung plait. Ashish gave the classic braid a more creative gloss over, sending models down the runway with messy, tousled, ragged plaits that protruded from the head in all directions.

From towering wigs to splashes of silver, these are the most notable beauty looks from Fashion Month

The best barbershops in Auckland, as voted by you