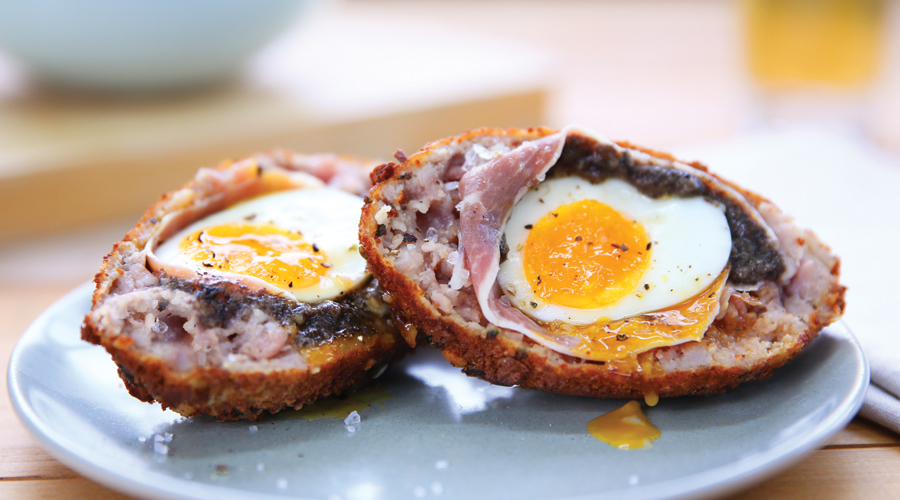 We share a delicious interpretation of the Scotch Egg.

You’d be forgiven for being skeptical when considering consuming the infamous Scotch egg that has, until recently, left a lot to be desired. New interpretations of the British delicacy however have been proven to yield rather delicious results, hence our enthusiasm for a reinvented rendition of our own.

An updated version of the Scotch egg should include modern ingredients, yet not stray too far from its heritage. The original recipe, created in 1738 by London’s foodie haven Fortnum & Mason, was simply a boiled egg swaddled in pork sausage meat, coated in breadcrumbs and gently fried. Today, chefs use duck or quail eggs, wrapped in either venison meat, black pudding or chorizo to pack a newfound punch into this otherwise basic snack.

Our preferred reinvention involves all the usual suspects, along with a few surprises. Encasing a soft boiled, free-range egg with a few strips of salty prosciutto, spread with a generous layer of black truffle paste. We then carefully wrapped it in free-range pork sausage meat, dipped it in flour, egg wash and panko breadcrumbs, then gently fried it until golden brown, careful to ensure that the meat is cooked through. The result: an utterly moreish morsel.

The truffle adds a delectable earthiness, and the prosciutto an unexpected but welcoming layer of texture. Panko breadcrumbs are crisper than most, creating a brilliantly crunchy outer sheath. If truffles aren’t an alluring addition, use sausage meat dotted with chorizo, feta, smoked paprika and a hint of chilli. Serve with a cooling yoghurt and mint dip. Or, try using a rich duck egg and combine the meat with black pudding and rosemary for another decadent twist on the simple Scotch egg.

Truffle season is officially upon us. Celebrate with the most opulent truffle-centric dishes in town

Missing the buzz of Hotel Ponsonby? Here’s how to make its exemplary espresso martini

An exquisite exercise in how to pair several seren