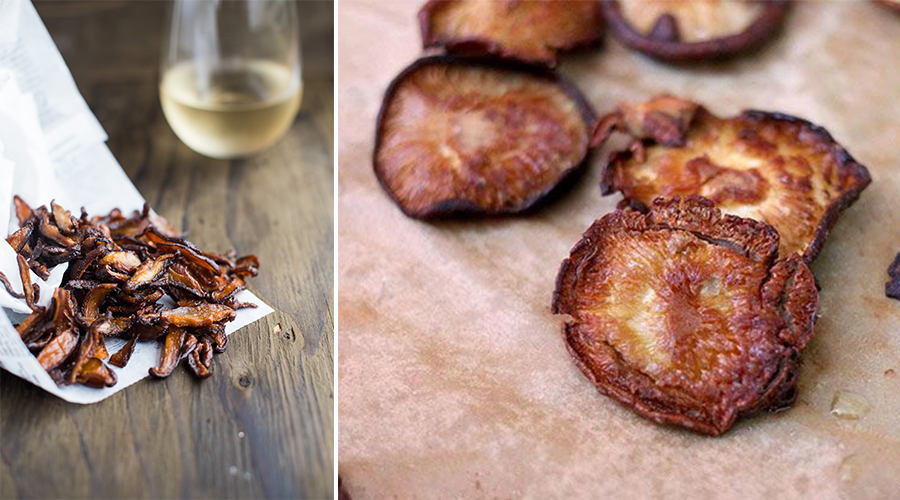 While we’re all inclined to tell the person advising us to cut down on our bacon consumption to kindly keep their opinions to themselves, since the World Health Organisation put processed meats like that of the porcine kind in the ‘carcinogenic to humans’ category, we think cutting back might not be such a bad idea after all.

Here to make that transition as painless as possible, we’re sharing a ‘mushroom bacon’ recipe. Now, in no way are we suggesting that this is going to replace one’s love affair with the almighty cured meat product but the texture and savouriness of the crispy shiitake mushrooms sing of essence of bacon. Treat it as a delectable nibble to accompany a glass of white or add it alongside real bacon to make up half of the recipe’s required rashers and your taste buds won’t even notice the health-saving measures you’ve put in place.

Method:
Crank the heat to 200 degrees°C. Place a baking sheet in the oven to heat up. Clean off the mushrooms with a cloth but don’t wash them. You don’t want them water-logged. Remove mushroom stems reserving just the caps (you can also slice them sideways). In a bowl, mix the caps with olive oil and salt. Spread the caps in a single layer on the pre-heated baking sheet. Cook for 8 minutes. If they look nice and toasty roasty, remove them from the oven and set aside. Mix together maple syrup, smoked paprika, chipotle powder, and black pepper. Combine the caps with the maple syrup mixture, and spread them out again on baking sheet. Bake again for about 3 minutes or until beautifully browned and crisp.

Mistake to avoid:
You’ve already taken care not to wash your mushrooms so they don’t get soggy. But also be careful not to saturate them with too much olive oil. The key is to make them as crispy as possible.

Yet to try functional mushrooms? Catch up on the wellness world’s enduring obsession with fungi