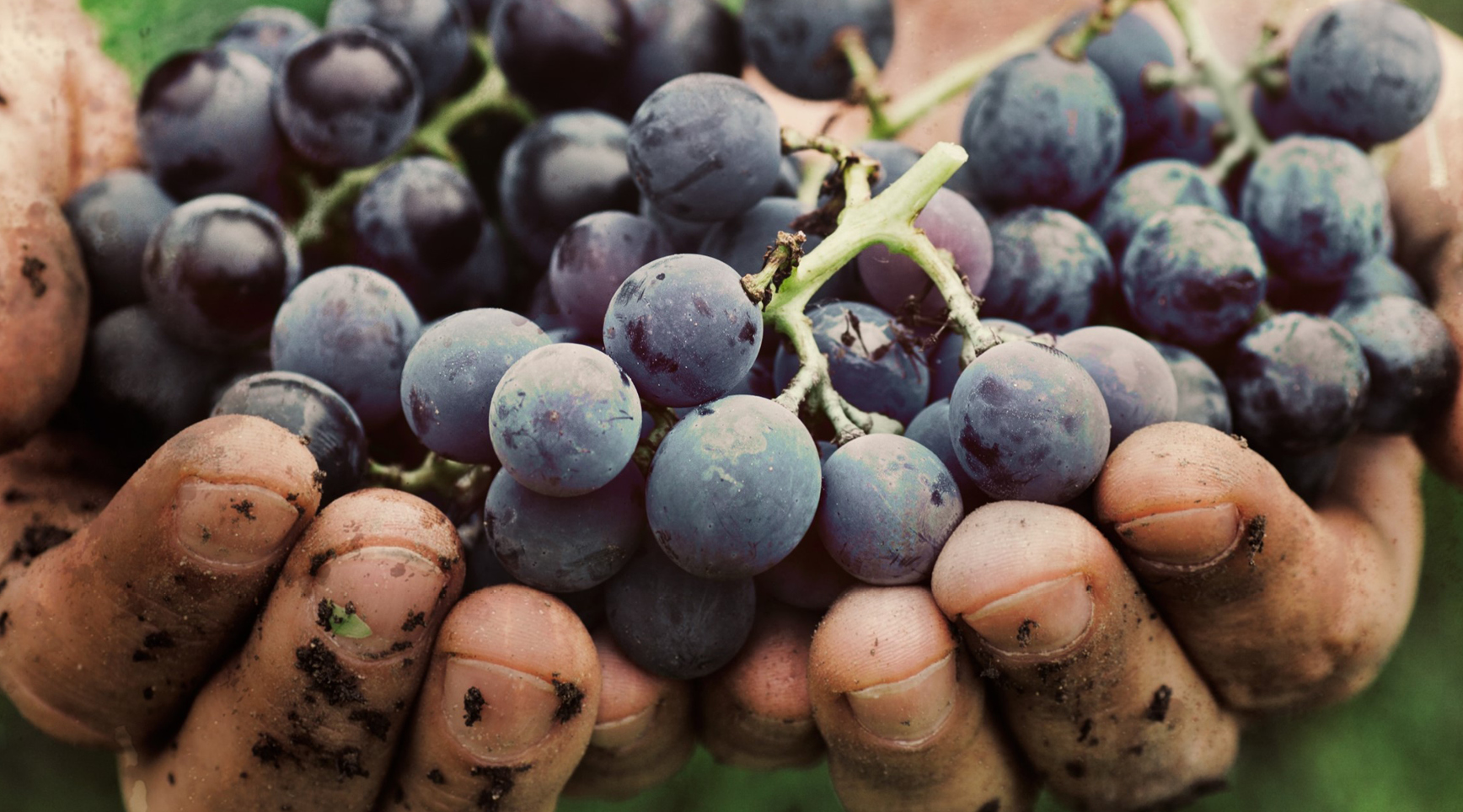 The idea of ‘organic’ has grown to become an all-encompassing lifestyle choice. It speaks to swearing off harmful chemicals and acknowledging their effects on both our long-term health and that of the environment. But until recently, it wasn’t something we normally equated with our six o’clock glass of pinot. For some, the complex minutiae that cause one wine to be different from another doesn’t go much further than the label, but you don’t have to be an expert in viticulture to know that these more natural strains are offering something entirely different from their conventional cousins.

They might sound similar, but the monikers ‘organic’ and ‘natural’ don’t preface the same kinds of wine, and while all natural wine is inherently organic, not all organic wine is considered natural. In order for a drop to be the former, its production must be free from herbicides, chemical fertilisers, pesticides and fungicides, and its grapes grown with a greater emphasis on the land as opposed to just the flavours of the fruit. Many growers say that this focus on long-term environmental sustainability is one of the main drivers for going organic, and as retailers like Huckleberry introduce more organic labels to their line-up, the pursuit is becoming increasingly driven by consumers too. Currently, the wine offering at Huckleberry is around 85 percent organic which, as their Chief Executive Richard Lees explains, reflects the sector’s “significant steps forward in quality and availability.” It’s also a matter of taste. According to Lees, the process of making organic wine can imbue the resulting drop with an honest expression of terroir, where the flavours are more pure, expressive and interesting and reflect the individuality of the vineyard’s topography. Despite the common misconception that in order for something to be organic it must be a bit ‘out there’, the appearance, taste and texture of any wine (organic or not) really comes down to the preference of the winemaker. And once you get past any reservations you may have about this break from convention, you’ll find that organic wine boasts some pretty significant advantages health-wise.

According to Huckleberry’s qualified naturopath, Kim Wessels, the chemicals used to produce conventional wine, like pesticides and fungicides, can have a disruptive effect on our bodies, impacting hormonal balance, brain capability, bone health, detoxification pathways and other important processes we need to live long and healthy lives. By eliminating them we are, as Wessels articulates, “drinking a much cleaner product, reducing the impact on key detoxification organs like the liver and kidneys.” Organic wines also have a lower sulphite content — the synthetic food additive is widely used in winemaking as a preservative — due to none being added in production. Wessels emphasises that this makes organic wine drinkers less likely to develop symptoms like shortness of breath, wheezing, flushing, nose stuffiness or hives, often resulting from imbibing the conventional stuff. 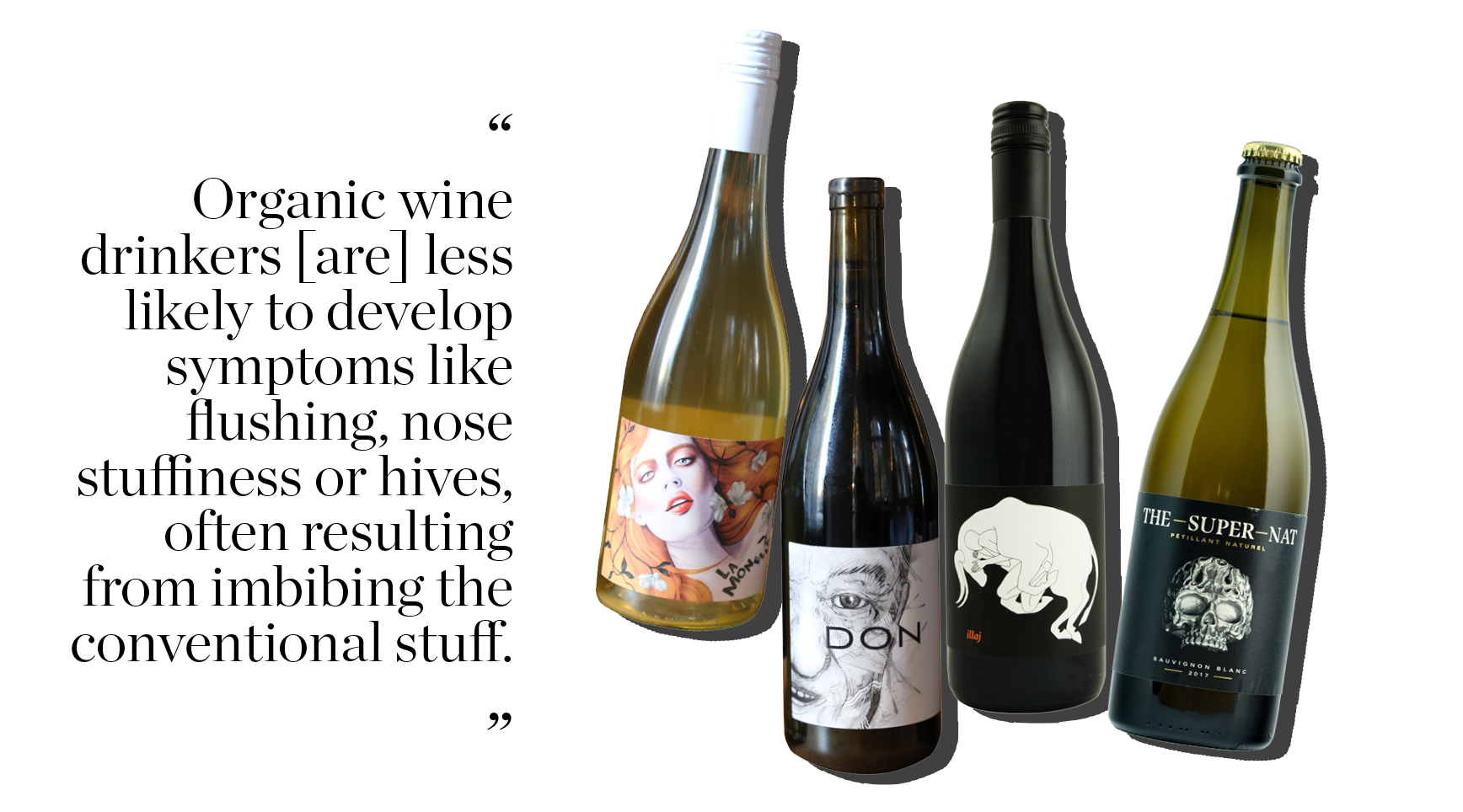 This all remains true for wines of the natural variety, with a few distinct differences. Natural wine is also made from biodynamically farmed fruit, but there is no intervention whatsoever in its production, including in fining or filtration. Grapes are hand-harvested, fermented on their own and taken to bottle in order to retain the unique characters of the vineyard from which they came. Dan Gillett, owner of Wine Diamonds and supplier of natural wine to inner-city eatery Culprit, knows more than a thing or two about natural wine, saying that the first time he tried it he found it “thoughtful, captivating and unlike anything else.” Going on to credit its “wider spectrum of flavours, purity in taste and honesty” as the reasons that spurred him on to learn more about the viticultural subcategory, Gillett says that natural wine boasts an “underlying integrity… not found in most conventionally made wine.” It really is a fascinating art, where the absence of cultured yeast, added acid, sugar, tannin, concentrate or enzymes results in something entirely unexpected. “Natural wines come in all shapes and sizes,” Gillett says. “Clean and funky, cloudy and clear, sparkling and still, dry and sweet, rich and weighty or light and zappy,” it’s all about asking the right questions when you’re buying a bottle or ordering a glass. If the selection is good enough, you’ll find something that will tick all the boxes. It’s important to note that, while many people think of this as its hallmark, cloudiness is not exclusive to natural wine. “The most important aspect” Gillett explains, “is for the grapes to be farmed organically. Cloudiness is a winemaking decision… not a defining feature of natural wine.”

The attraction of natural wine for chef and co-owner of Culprit and Lowbrow, Jordan MacDonald, led to his adding a selection to the eateries’ menus, drawing parallels between the natural wine industry’s “small producers… pushing boundaries” and his own culinary approach. Wanting to support the “real people making real wine with a real story to tell”, MacDonald says the wine list at Culprit is now 30 percent natural, and with an overwhelmingly positive response from customers, that number is sure to grow. “We know we’re supporting a thriving community of artisan producers”, MacDonald explains, and it’s an admirable approach.

Although the industry’s ‘artisanal’ status and more complex production has the potential to result in extra expenses being fronted by the consumer, for both MacDonald and Huckleberry — the former taking less of a margin in order to supply a product he believes in, the latter ensuring competitive pricing that keeps organic on par with conventional — it’s worth it.

So, whether you consider yourself a proponent of the organic and natural wine movement or not, it’s certainly a burgeoning industry. The number of organic varieties on the shelf is growing significantly and this momentum is creating a new generation of wine drinkers, for whom the holistic approach is more appealing. Organic wine offers us the chance to expand our palates through its varied flavours and textures, and if that isn’t enough to spur you to make the switch, its lower impact on both the environment and our bodies, as well as its reputation for taking some of the sting out of the dreaded ‘morning after’ (when consumed responsibly, of course) should be.

Organic Wine Week is next week, from the 17th until the 23rd of September. In celebration, Huckleberry will be hosting organic wine tastings on the afternoons of Friday the 21st, Saturday the 22nd and Sunday the 23rd at their Harvest Grey Lynn, Browns Bay and Mount stores.