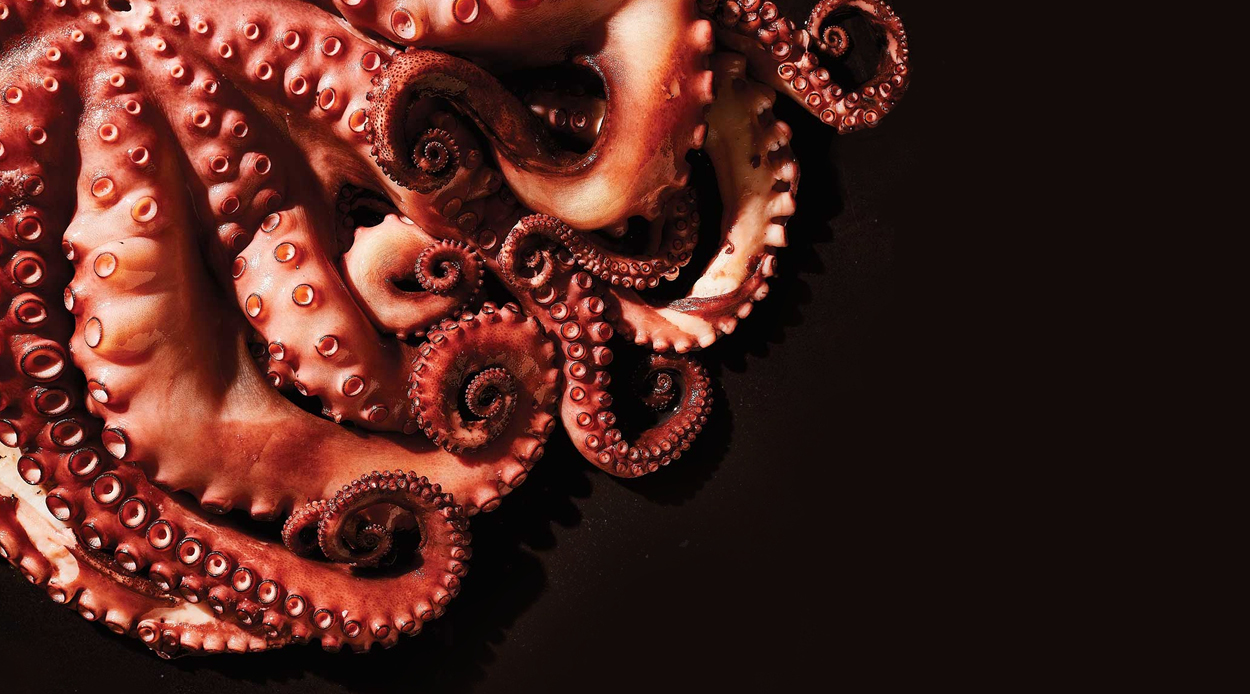 Seafood platters in New Zealand tend to incorporate a smorgasbord of marine life, from oysters (freshly shucked or encased in tempura) to clams, mussels, fresh cuts of sashimi and ceviche. And while squid and calamari have made their way onto many a menu, their not so popular cousin, the octopus, has been notably absent.

A member of the cephalopod family, they are closely related to squid, calamari and cuttlefish, the octopus is abundant in our waters, and yet is often considered a pest, due to its cunning ability to sneak into cray-pots and steal the prized catch. But thanks to our culturally diverse restaurant industry and our willingness to consider seafood varieties that are more sustainable, the octopus is starting to stake its claim on Auckland’s culinary map.

The octopus is a nutrient-dense meat that is rich in protein, vitamin B-12, selenium and naturally high in iron, it’s also a seafood, that when prepared correctly, tastes phenomenal. Whether char-grilled, boiled, fried or raw, a handful of local restaurants are doing the humble octopus the culinary justice it deserves. Growing up in Japan, Owner and Chef, Makoto Tokuyama’s developed an opinion that octopus is “sexy and tasty.” His ceviche dish sees delicate slices of slow braised octopus served with Japanese Myoga ginger that acts as the cherry on top, giving the dish a dimension of earthy zest and showcasing the tenderness that this seafood is capable of achieving. 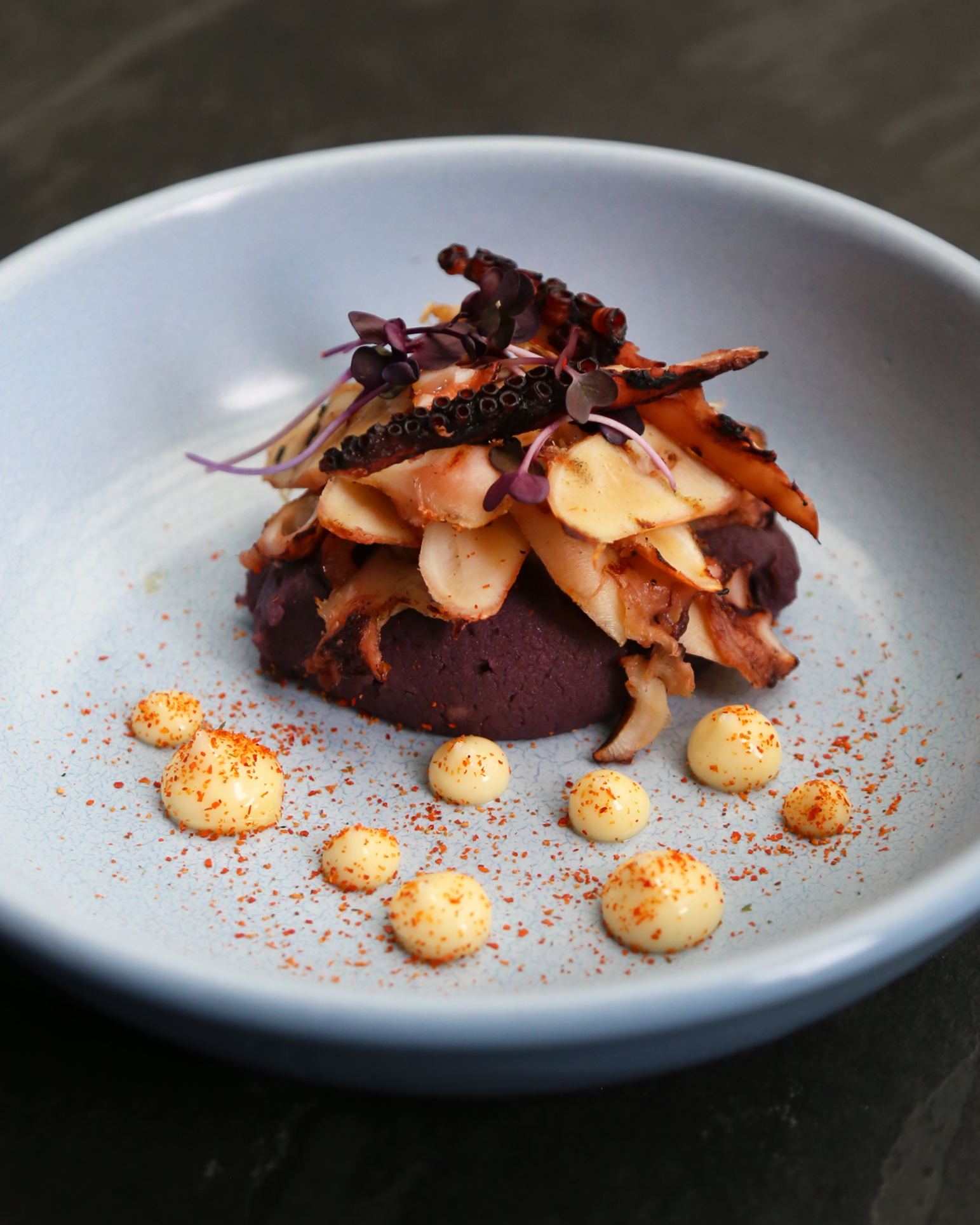 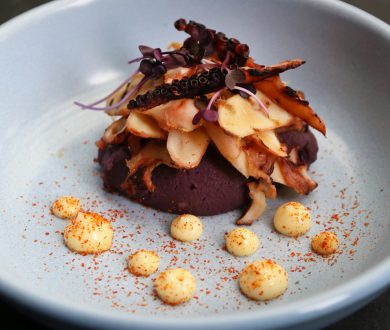 From the first day Azabu opened its doors, its grilled octopus has been a standout. The iconic dish begins with seasoned, grilled and sliced octopus carefully layered on a bed of creamy and rich purple potato mash and infused with a citrusy yuzu pepper for a combined hint of sweet and sour. The final sprinkle of spicy Japanese shichimi pepper blends in with the yuzu pepper mash while enhancing the saltiness of the octopus. 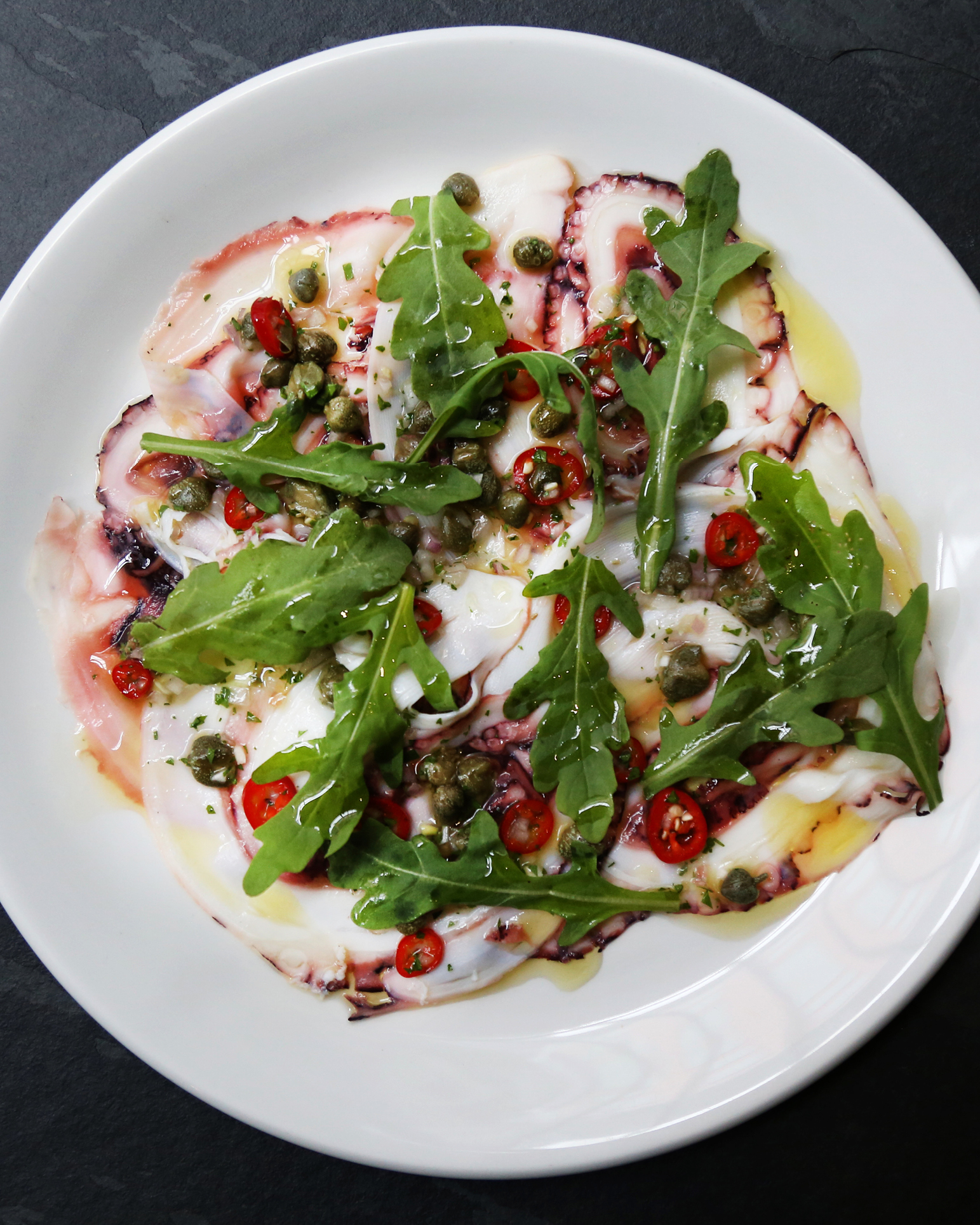 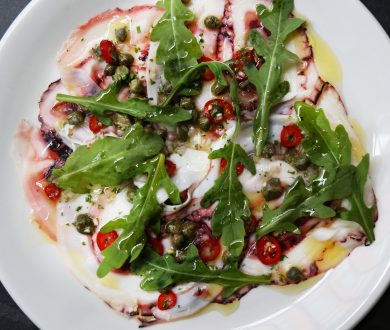 Renowned chef Sean Connolly shines a light on the unsung hero of Italian cuisine at his restaurant, Gusto at the Grand. His rendition of octopus carpaccio is the palate refresher that everyone needs. Thin slivers of delicately cooked octopus are sprinkled with capers, shallots, fresh chilli and a drizzle of EVO for the ultimate example of tasteful simplicity.

From Gusto at the Grand 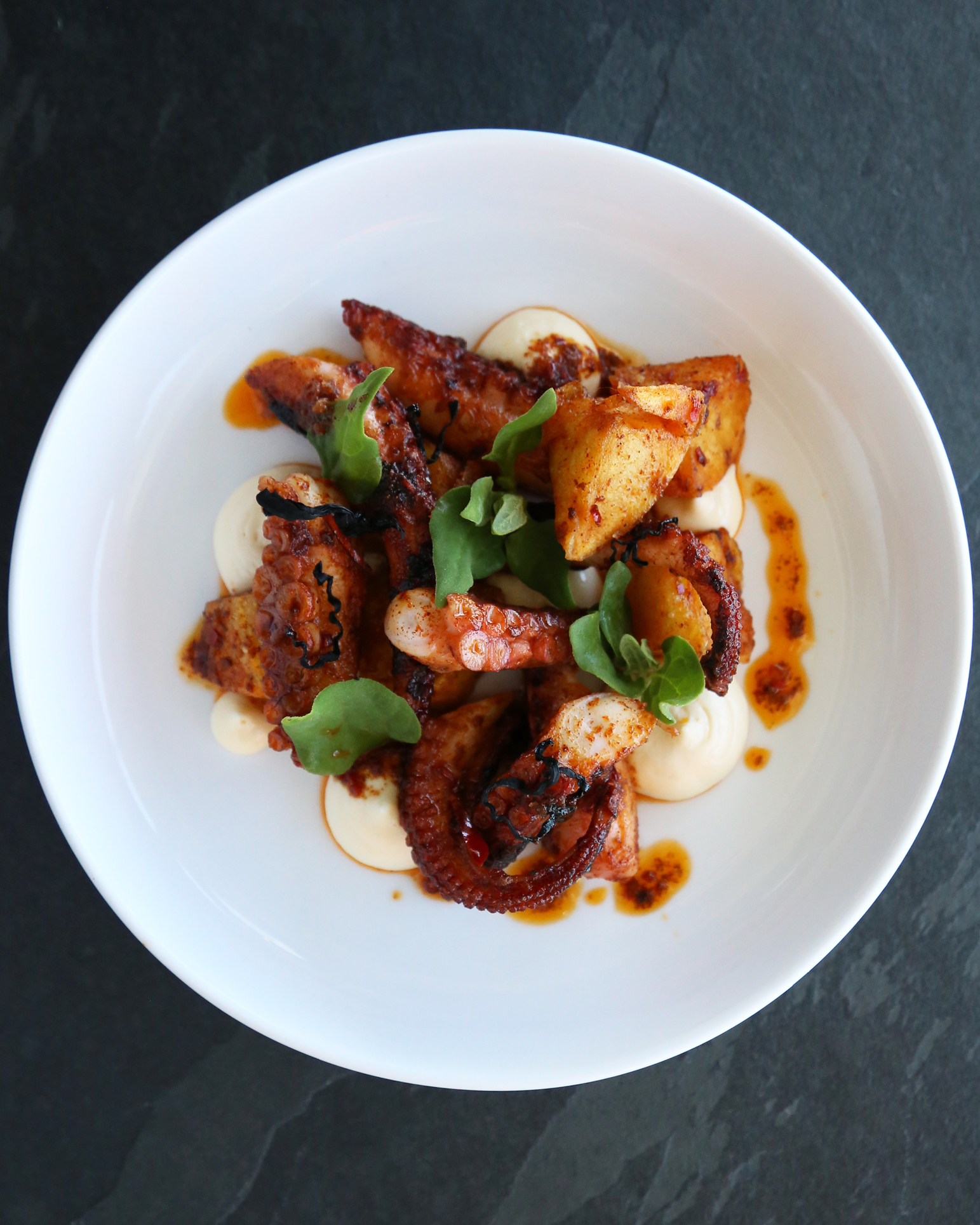 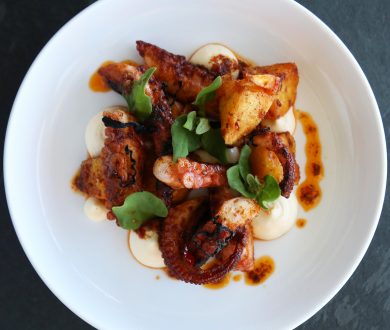 A long-standing favourite on the Ostro menu, Josh Emett’s incarnation sees perfectly charred octopus accompanied by golden, fried potatoes that have crisp exteriors and fluffy centres, and a smoked mayonnaise to enhance the charred flavours of the delicacy. Adding another dimension to the flavour is butter which has been infused with seaweed and is complemented by a drizzle of chilli, achieving the perfect hybrid of spicy and umami. 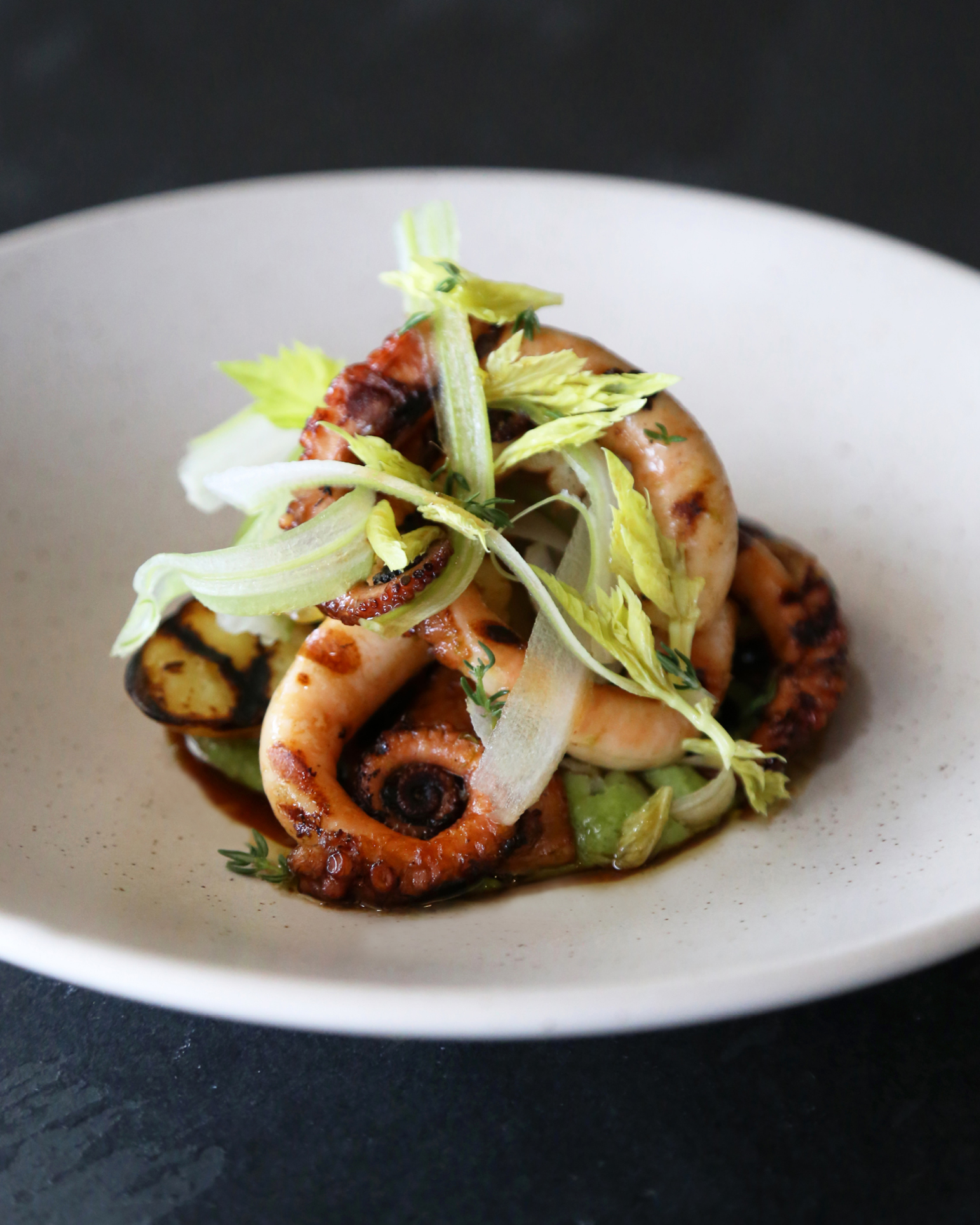 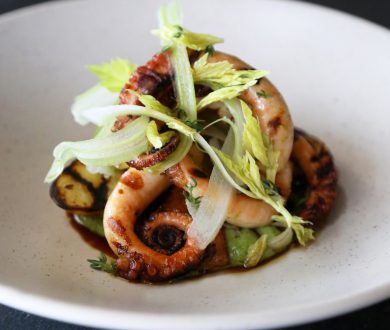 Marinating octopus with wild thyme, beef jus and a fresh squeeze of lime before it’s charred on the grill is the culinary trick employed by Andiamo’s Executive Chef, Gareth Stewart. The beef jus forms a sticky glaze once the octopus is grilled, which then combines effortlessly with the crispy, confit duck-fat potatoes and basil emulsion for one very memorable dish.