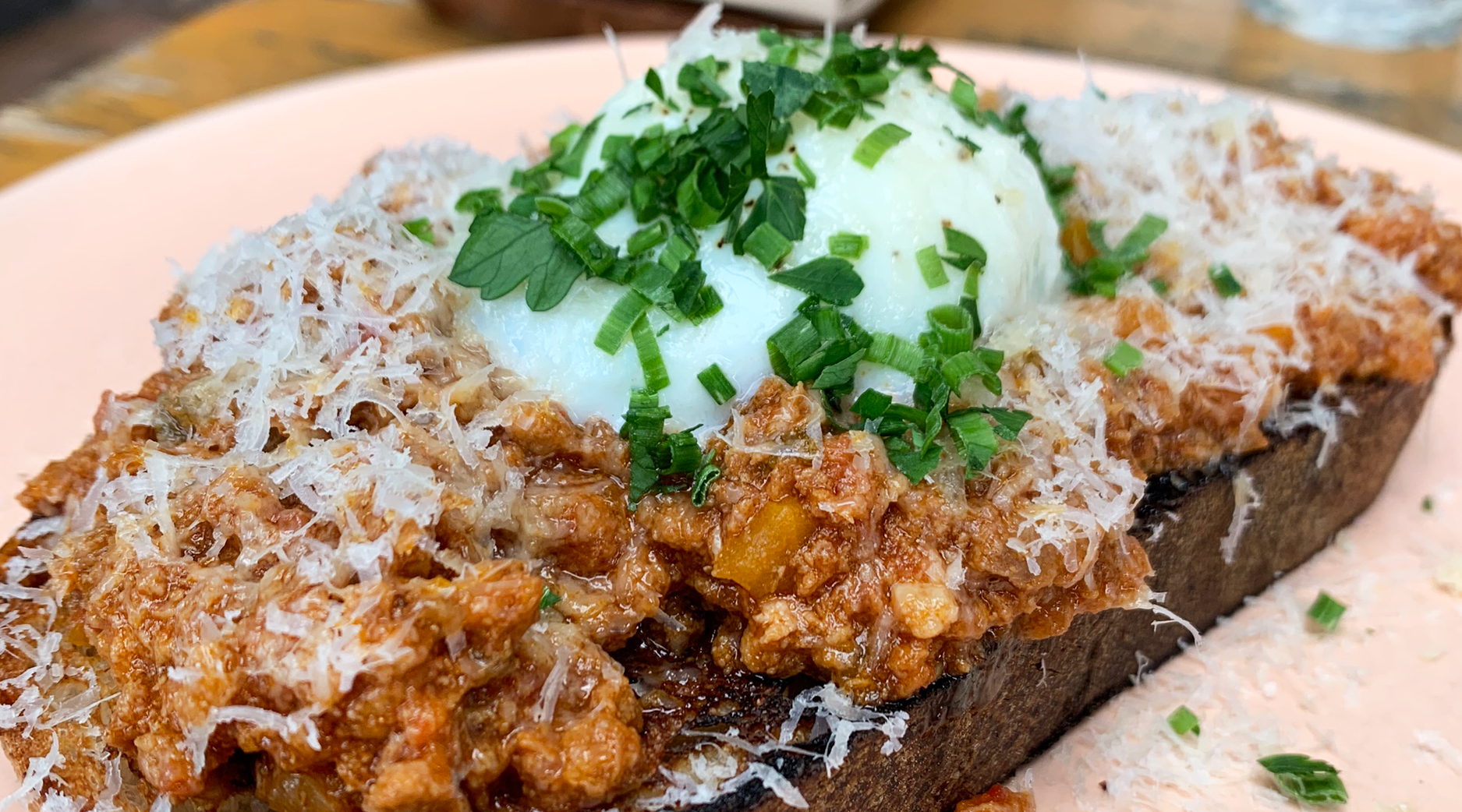 Everyone knows that the added bonus of having spaghetti bolognese for dinner is the fact that we can have mince on toast for breakfast the next morning. The meat has been left to marinate in its own glorious flavours overnight, and when served on a slice of crispy toast with a slathering of butter, there’s nothing quite like it. Mince on toast is a nostalgic and universally loved dish, and there are a few cafes in Auckland who understand its significance enough to include a delicious rendition on their menus — with their own twists, of course. Without further ado, here is where to find the best mince on toast dishes in town.

Orphans Kitchen
Although the menu at Orphans Kitchen is no stranger to change, its bolognese on toast is a longstanding staple. A long piece of toasted, housemade sourdough is topped with a hearty portion of a saucy bolognese that slowly soaks itself into the crunchy bread, while the final touch of grated parmigiano reggiano melts over the top. This dish also comes with the option to add a slow-poached egg, something we strongly advise you do. The chefs at Orphans know their way around an egg, and their slow-poached version with its impossibly gooey yolk is the perfect way to enrich the cheesy mince.

Ozone Coffee Roasters
This recently-opened Grey Lynn eatery and coffee roastery is arguably one of the most exciting new spots in town and its wagyu braised mince on focaccia toast is one of the reasons why. Wagyu mince has a higher fat content, which naturally lends the dish more richness in flavour and feel. The addition of piccalilli, which is basically a pickled relish, cuts right through the decadent wagyu and restores balance to the plate. A sprinkling of smoked cheddar sits on top of the mince as the final element and deepens the salty profiles of the piccalilli and mince.

Amano
Renowned for serving delectable pastries and pasta dishes, that isn’t all that acclaimed Britomart eatery, Amano, is capable of. Its breakfast dishes are some of the best in town and the bolognese on toast is tasty beyond words, boasting a sauce that is as flavoursome as the kind that are served with the lauded pasta dishes. Seeing a crispy slice of toast entirely covered by mince and grated parmesan cheese, this dish is the ultimate way to start a day, and is made even better when the optional poached egg is added on top.

Mission
Simple, straightforward and tasty is how we would describe Mission’s mince on toast. A toasted slice of sourdough is topped with a generous helping of hearty mince — just enough to satisfy but not to the point that it almost defeats you — upon which Mission adds fresh basil for a fresher approach. Don’t worry though, cheese is still an important element here and the ever-present egg (this time sunny side up and fried instead of poached), makes Mission’s rendition a balanced, satisfying meal.

Andiamo Eatery
The Herne Bay institution, Andiamo Eatery, is not only home to some of the tastiest Italian cuisine in Auckland but also boasts an exceptional weekend brunch menu. The mince on toast is unlike anything we’ve had before, where the meat is a concoction of pork and veal where the veal has been slowly cooked for seven hours, making it unbelievably succulent and flavourful. When we say this is some of the best mince on toast in town, we mean it.

The Candy Shop
This Newmarket cafe has recently introduced a couple of new dishes to its winter menu and the chilli bolognese on toast is the one on everyone’s radar at the moment. On a toasted slice of sourdough bread sits a mountain of thick bolognese with the additional ingredient of chilli woven through. The extra kick of spice is a total game changer and elevates the tanginess from the tomatoes. Pecorino cheese is also added to the dish to lend a delightful creaminess. Finally, thinly shaved cauliflower is laid over the top, lending the plate a sense of earthiness and balance.

Let’s toast the evolution of toast: 8 of the most sensational slices in town