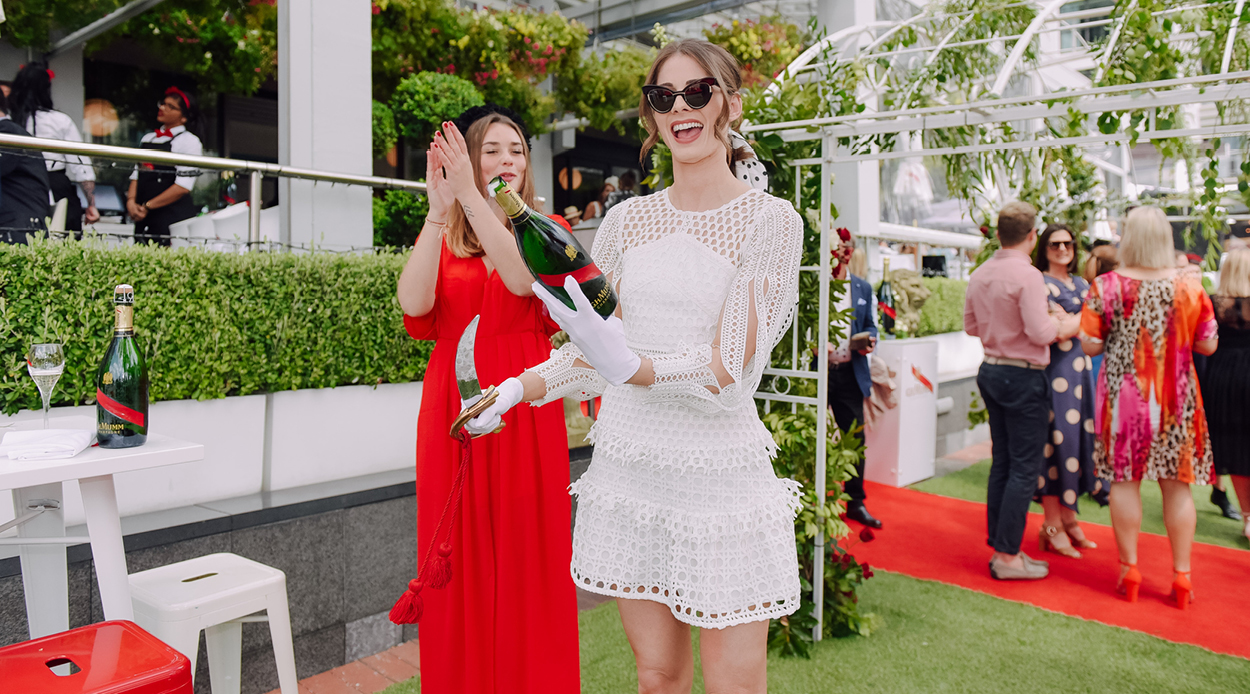 The race that stops a nation is fast approaching. The Melbourne Cup is a month away (Tuesday, 5th November) and punters are hastening to book tickets at restaurants around Auckland to celebrate. It’s no wonder, really, considering that the Melbourne Cup is widely acknowledged as one of the most exciting events of the year, giving men and women cause to don their finest getups for a thrilling afternoon of horse racing and entertainment.

That said, there’s nothing quite like celebrating the Melbourne Cup with a brand that has long been associated with the event. The luxurious Champagne Mumm and its iconic bottles of Grand Cordon are synonymous with celebration and as such, the renowned brand is gearing up to take over a large number of venues around Auckland on the big day — giving us a raft of options for celebrating the cup in style.

Here, we round up the best places in Auckland to mark the occasion with Champagne Mumm. But you best get in quick, these are some of the hottest tickets in town.

Soul Bar & Bistro
Head to one of our favourite spots in Viaduct Harbour for an elevated, joyful celebration. For $195 per person, ticketholders will enjoy a flute of Champagne Mumm on arrival, a delicious four-course lunch and a number of screens that will play all the action live from Melbourne, as well as on-site TAB facilities. There will also be a host of entertainment including games and various prizes and sabrage moments hosted by Mumm Brand Ambassador, Ophélie Neil.
From 12pm until 5:30pm. To book a ticket for Melbourne Cup at Soul Bar & Bistro, call (09) 356 7249.

Harbourside Ocean Bar & Grill and Botswana Butchery
Receive a flute of Champagne Mumm on arrival before enjoying a four-course lunch at these delightful waterfront spots. At $175 per person, this event is sold in tables of 10 and set to be the perfect excuse to get together with your friends for an afternoon of racing, betting, live entertainment and various best-dressed accolades. Smaller tables can be booked at Botswana Butchery. Stick around for the after-party at Harbourside featuring DJ Murray Sweatpants.
From 12pm until late. To book a ticket to celebrate the Melbourne Cup at Harbourside Ocean Bar and Grill & Botswana Butchery, click here. Or call (09) 307 0556.

Longroom
This Ponsonby institution is offering two action-packed hours of celebration and will hold Ponsonby Road’s only official TAB machines. Tickets are $120 per person and attendees will be treated to a flute of Champagne Mumm on arrival, in preparation for the two hours ahead of canapés, creative cocktails, as well as other beverages and a raft of entertainment and prizes for best dressed.
From 3pm until 5pm. To book a ticket to celebrate the Melbourne Cup at Longroom, click here.

Regatta Bar
Enjoy a three-course lunch, a flute of Champagne Mumm on arrival and an afternoon of sabrage, live entertainment and thrilling Melbourne Cup action (including on-site TAB facilities). Tickets are $150 per person.
From 12pm until late. To book a ticket to celebrate the Melbourne Cup at Regatta bar, click here.

HeadQuarters
Originally offering two ticketing tiers (A-Class is sold out), B-Class tickets for celebrations at this Viaduct Harbour locale are $100 and include a flute of Champagne Mumm on arrival, all-day appetisers and an Eton mess dessert. The afternoon will be run by MCs Mark Stafford and Colin Mathura-Jeffree and best-dressed prizes will be given out, while later in the evening live music and DJs will be on-site to keep the party going.
To book a ticket to celebrate the Melbourne Cup at HeadQuarters, click here.

How to celebrate the Melbourne Cup in Champagne Mumm style

Left it to the last minute? It’s not too late to secure your spot at these Melbourne Cup celebrations

Our Autumn issue is here. A celebration of talent