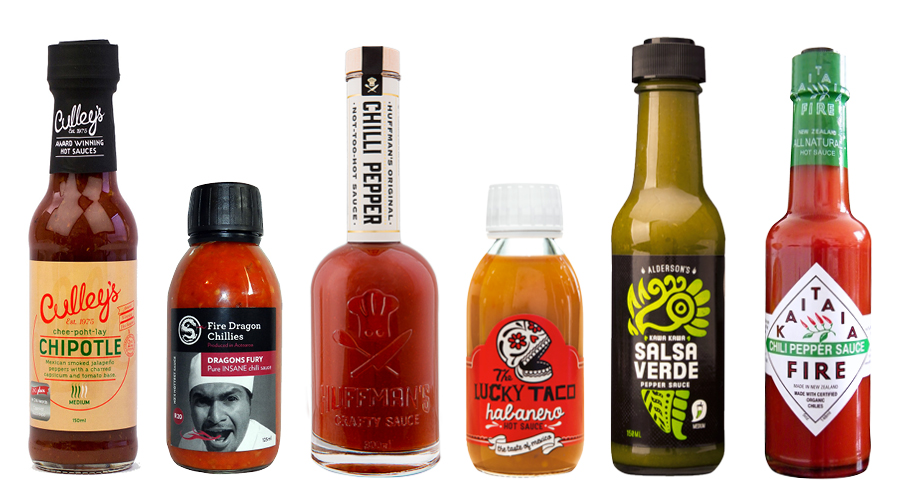 From a subtle tingle on the tongue to a ring of fire that ignites your insides, no hot sauce is created equal. With our increasing fascination with heat to eat, we decided it was high time to educate ourselves — in a burn and learn manner — in the complex world of the Scoville scale and understand why these spicy delights are the second most popular condiment after salt.

Culley’s Chipotle
To be considered a genuine chipotle, the base of the sauce is made from smoked and dried Jalapeños — a medium to hot variety part of the Capsicum annuum species. The peppers are roasted over a firepit before being combined with a tomato base infused with smoked paprika to enhance the earthy undertones resulting in the deliciously unique flavour. This smoky sauce is used as an everyday condiment, pairing phenomenally with steak, as well as being ideal for marinating meat, especially chicken, pork and beef prior to grilling.
Contains: Smoked Jalapeño

Fire Dragon Chillies Dragons Fury
Hailing from Hokianga and known to grow only the hottest cultivars of peppers, their Dragons Fury sauce holds the title of New Zealand’s hottest chilli sauce. The explosive blend is made up of the Carolina Reaper, the hottest chilli in the world, the Trinidad Scorpion, a famously fruity chilli that has many descendants varying in Scoville heat units, the bhut jolokia also known as the ‘ghost’, and the fierce naga viper, a three-way hybrid pepper. The amalgamation of these peppers results in a sauce that’s reserved only for those who are partial to an unpleasant level of flaming heat likely to reduce you to an eye-watering, dripping-in-sweat state. Tread with extreme caution.
Contains: Carolina Reaper, Trinidad Scorpion, Bhut Jolokia, Naga Viper

The Lucky Taco Habanero
Auckland’s famed food truck — The Lucky Taco has graciously made their feisty hot sauce available at home. Unsurprisingly, using the habanero chilli as the base for their habanero sauce, this pepper originates from the Amazon and sits in the hottest species, Capsicum chinense. It has a strong tropical flavour followed briskly by a welcome yet scorching heat. This rendition uses vodka, honey, orange, capsicums, lime, lemon and orange juice to counteract the heat and to employ a slight citrus tang, making it a delicious option to add zing to poached eggs, spice up a pizza, marinate chicken, or even putting some kick in your margarita.
Contains: Habanero

Huffman’s Original Chilli Pepper Not Too Hot Sauce
Sure to lift the flavour in your food and beverages is award-winning Huffman’s Original Chilli Pepper Not Too Hot Sauce. Winning the ‘Pepper Blend’ category at the 2015 World Hot Sauce Awards, their recipe uses the bird’s eye chilli, a pepper that originates in Guyana, and is commonly found in Southeast Asia. This particular pepper adopted its name due to its petite body, making it easy for birds to spread the seeds. Its mild flavour renders it perfect for seasoning dishes, especially seafood, like freshly shucked oysters or atop steamed mussels with butter, garlic, white wine and parsley.
Contains: Vietnamese Bird’s Eye

Alderson’s Green Salsa Verde
An almost refreshing green sauce made from the Jalapeño and the Manzano species of pepper, the Jalapeño brings a tantalising flavour and medium heat. The Manzano  (Spanish for apple) is a relative of the South American rocoto pepper and is often used in fresh salsa due to its thick skin. Alderson’s ferments the chillies for four months using a sourdough culture to give the sauce a distinguished pickled flavour, that’s enhanced by fresh coriander, garlic and the native Kawakawa leaf. This particular sauce goes exceptionally well with avocado, so elevate your next batch of guacamole with a generous spoonful to inject a subtle heat and a deliciously herby zing.
Contains: Jalapeño Chilli, Manzano Chilli

Kaitaia Fire
Since 1989, Kaitaia Fire has been New Zealand’s answer to the world famous Tabasco hot sauce. Crafted from the cayenne pepper — the most commonly grown chilli in the country, falling under the Capsicum annuum species related to bell peppers, along with jalapeños and paprika, such a versatile chilli can be used fresh in cooking, for pickling, dried into chilli flakes, or made into a powder which is commonly known as cayenne pepper. Each batch of Kaitaia Fire is aged in barrels for up to three years in cider vinegar, resulting in the Tabasco flavour. It’s our choice for giving your next Bloody Mary a downright delicious kick.
Contains: Cayenne Pepper

Say goodbye to hangovers with these sinfully delicious Bloody Marys

Try these sinful cocktail recipes with some heavenly additions