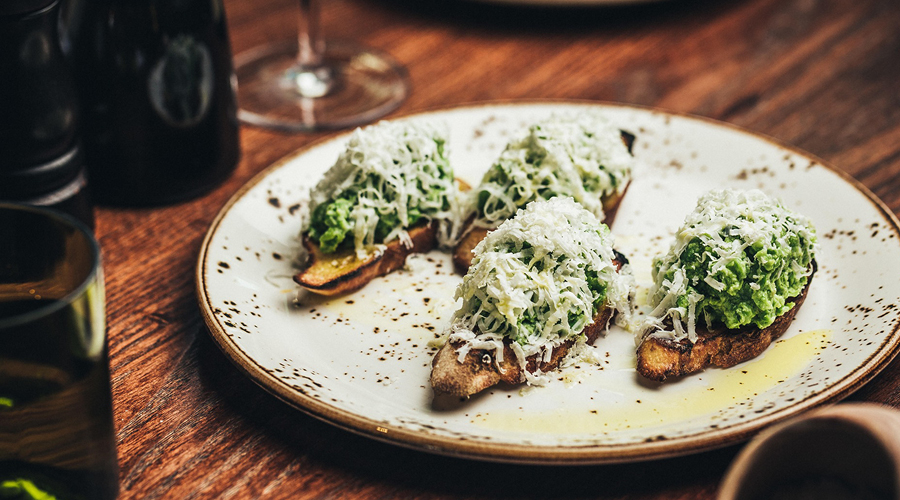 Pea, mint and ricotta bruschetta from Gusto at the Grand

Huami
One of Auckland’s most popular Chinese restaurants, Huami is treating its diners to a generous $49 sharing menu. The feast will begin with a mixed basket of dim sum, including siew mai, wonton, squid ink dumplings and spring rolls. Then comes the main event, which will comprise of not one, not two, but four dishes of Huami’s favourites. The infamous fruit-wood-roasted duck will most definitely be featuring, as well as the baked manuka honey glazed pork, string beans and Hong Kong-styled fried egg noodles.
Monday — Friday: 12pm until 2:30pm

MASU by Nic Watt
Just in time for the summer season, when the craving for ocean’s bounty reaches its peak, MASU by Nic Watt has brought back its $49 sushi and sashimi lunch platter. Showcasing the finest seafood, this platter includes three types of sashimi that have been picked as the best of the day by the chef alongside pacific oysters with ponzu. Diners are also provided with a sashimi donburi, vegetable maki roll and a ceviché taco.
Monday — Saturday: 12pm until 3pm

The Grill by Sean Connolly
Enjoy a delicious two-course lunch at The Grill by Sean Connolly. Start with either a light Caeser salad or opt for something richer, like the duck liver parfait that’s served with a buttery brioche. For mains, you’re given three different options, all which sound as equally enticing. Either go traditional and get the Savannah Fillet Mignon, or indulge in The Grill Wagyu burger with duck fat chips — a classic. Vegetarians can also get amongst this lunch deal with the delicious smoked pumpkin risotto.
Wednesday — Sunday: 12pm until 2:30pm

Gusto at the Grand
Unlike all the other offerings that are listed, Gusto at the Grand’s $49 deal includes two people instead of one. Meaning that a two-course lunch at this acclaimed Italian restaurant will cost you less than $25 — an opportunity you do not want to miss. The entrée is, of course, a Gusto staple — pea, mint and ricotta bruschetta. While for mains, you can choose between the penne with guanciale or the snapper alla ghiotta. No matter which you decide, you’ll receive a glass of La Vis Nosiola Trentino 2016 to complement your meal.
Monday — Sunday: 12pm until 3pm

The Sugar Club
It doesn’t need to be a special occasion to dine up the Sky Tower, especially with The Sugar Club’s special $49 two-course menu that includes a main and a dessert and features the finest of Kiwi cuisine. The main dishes vary from steamed kumara with koji rice to Hauraki Gulf fish, to the staple Cambridge duck breast dish, to name a few. While for a sweet finish, dessert options include stone fruit with passionfruit curd and meringue and an indulgent chocolate ganache with sumac, hazelnut and pear.
Wednesday — Sunday: 12pm until 2:30pm

Orbit 360° Dining
Giving us an excuse to pay a visit to this elevated restaurant, the rotating Orbit 360° Dining is also partaking in the Federal St Lunch Club with its $49 two-course lunch deal. Entrées are either a cauliflower soup or salt and pepper squid, while the mains include either a Rangitikei free-range chicken breast or scotch fillet with potato gratin. If you haven’t dined at this revolving restaurant, it’s an absolute must-do.
Monday — Friday: 12pm until 2:30pm