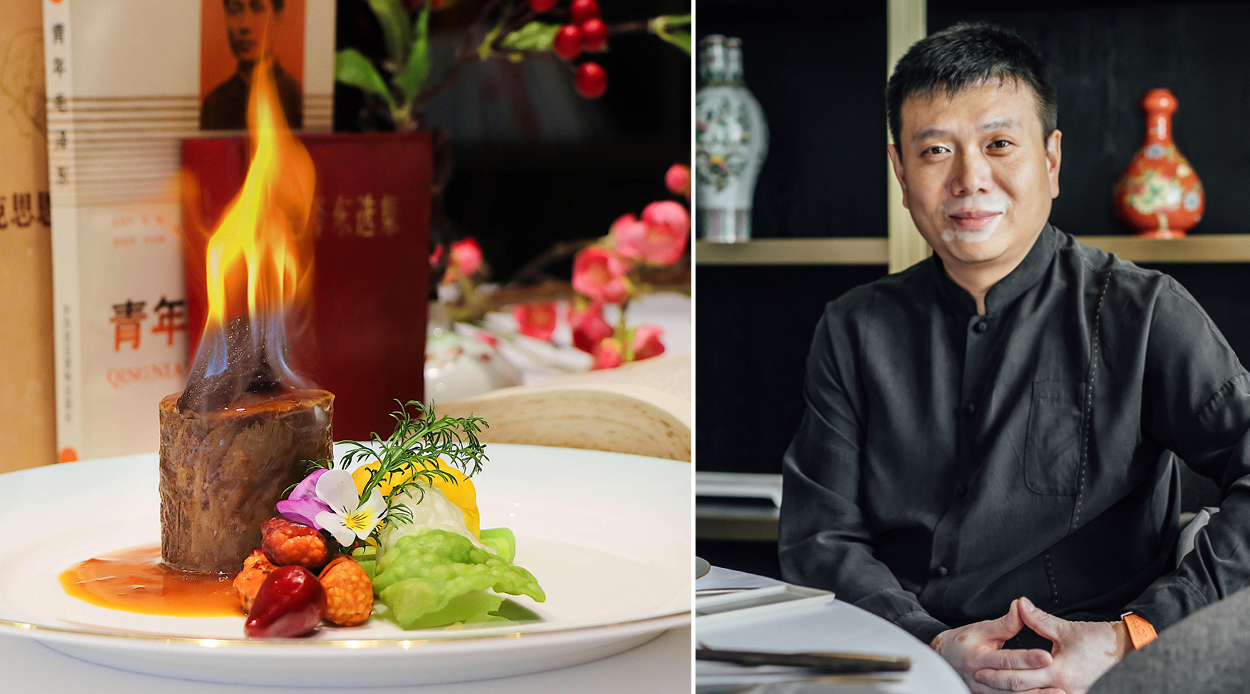 The region-wide winter festival, Elemental, is inspiring the same kind of vibrancy it promotes through light shows and installations, on the menus of some of our favourite restaurants in Auckland. For the month of July, Elemental Festival has collaborated with a number of eateries to see each create a special dish. With chefs around town exceeding expectations, here are some of their delectable creations you need to try before the end of the month.

Braised oxtail flambé from Red Wall 1939
Kevin Liu’s dish in celebration of the Elemental Festival is nothing short of absolutely divine. Inspired by the natural element of fire, tender, braised oxtail is served with an illuminated flame which matches its hot flavours of Sichuan pepper and rum. The dish is complemented with a side of Marcella-filled prawn and crispy sea salt slice to counteract the succulent richness of the melt-in-your-mouth oxtail.

Moana – Hapuka with charred leeks and shellfish velouté from Sid at The French Café
Te Reo for ‘ocean,’ the Moana dish from Sid at The French Café takes inspiration from the water and has resulted in a beautiful hapuka dish that is unlike anything we have ever tasted. All the ingredients on the plate are locally sourced and the dish is adorned with aromatic, charred leeks and a thick and creamy shellfish velouté to enrich the overall dish while enhancing its ocean flavours.

Fermented mushroom waffle from Culprit
Whenever Kyle Street and Jordan MacDonald are offered an opportunity to test their abilities and think outside the box, the duo jump at it without a second thought. Here, a fermented mushroom waffle is served with a Southern-fried shiitake mushroom sourced from West Auckland and is accompanied by marrow butter. The mushroom bursts with natural juices and the waffle adds a heartiness that contrasts the intensely-flavoured shiitake.

The Ebisu egg from Ebisu
Drawing inspiration from the air, Ebisu’s Head Chef, Fred Wong has created a dish that embodies the lightness of the natural element. Instead of creating the kind of savoury fusion dish Ebisu is renowned for, Wong has put together a beautiful dark chocolate chilli tiramisu. What makes this tiramisu special is not only its unique shape but the incorporation of orange oil, white chocolate and yuzu popping candy for a fun texture, making the dish a refreshing one that doesn’t take itself too seriously.

Maewoontang with enoki mushrooms from Han
Executive Chef and Owner of Han Restaurant, Min Baek is paying tribute to the maewoontang, a dish of his childhood growing up in Busan (otherwise known as the seafood capital of South Korea). The fish soup is made from the boiling down of fish heads, bones and pork broth and as such, carries a deep savoury flavour of umami. The soup is topped with fried tofu, line-caught fish from Leigh Fisheries and stems of enoki mushrooms which have been dried and then deep-fried to add a crispy component to the soulful soup.

Horopito fried chicken from Pūhā & Pākehā
The Māori legend of Maui bringing fire to the world is the inspiration behind Belinda and Jarrad McKay’s (owners of Pūhā & Pākehā) Horopito fried chicken. Horopito is a native New Zealand pepper tree and boasts a fiery taste which here, has been incorporated into the mayonnaise as well as the seasoning of the battered fried chicken. Vegetarians will also be able to get amongst the monthly special with a cauliflower version also available.

Jewels from the Earth from Euro Bar & Restaurant
Adam Rickett (head chef of Euro) was drawn to the seasonal produce of July and has presented it on to the plate in fine form. Utilising Jerusalem artichokes, fresh New Zealand hazelnuts and truffle, Rickett dubs the dish ‘Jewels from the Earth,’ a name which we think is perfectly appropriate for a dish of this quality. The milkiness of the hazelnuts are highlighted with the addition of home-made milk ricotta and the truffles linger on the palate, allowing the Earthy flavours of the artichoke to flourish.