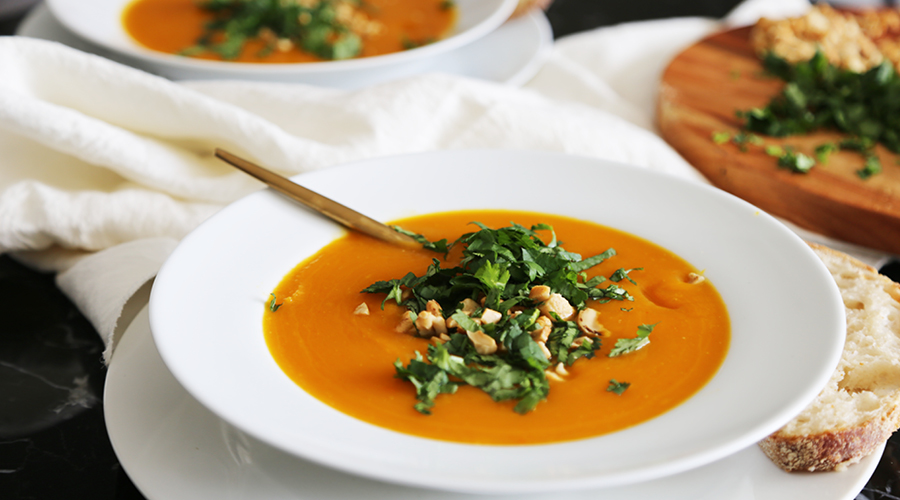 Here at Denizen, it isn’t often that we mobilise ourselves for a shared lunch. Despite the fact that we universally love food and would happily admit that some of our fondest office memories have come from days when birthday cakes have been brought in or pizzas ordered, our lunch breaks are generally less of an occasion and more of a time for ingesting something that will stave off the cravings a morning coffee can only do so much to abate. So it is with great joy that we introduce our new in-the-kitchen series, that will see us take turns to cook a Denizen team lunch in our beautifully appointed Fisher & Paykel kitchen.

For the first instalment of what is set to be a veritable feast for your eyes (and our stomachs), our Advertising Manager Fliss bravely offered her culinary services. Taking the recent drop in temperature into account, she chose to whip up a hearty pumpkin, kumara and lime soup, garnished with cashews and coriander and accompanied by fresh bread. Prepared perfectly and received accordingly, it was both a delicious lunch and a great excuse for us to come together in the middle of the day. Here’s how to recreate this winter classic at home.

Method:
In a large saucepan, add pumpkin and kumara then cover in cold water. Cover with a lid and bring to the boil, before reducing to a simmer for approximately 20 minutes until the all the pieces are cooked through. Meanwhile, add the onion and chillies to a frying pan and fry until the onion becomes translucent — then add this to the pot containing the pumpkin.

Blend the mixture until smooth (a stick blender is best) before adding the tin of coconut milk and putting back on the heat for a few minutes until it reaches a light simmer. Stir well to ensure the coconut milk is mixed in thoroughly. Remove from the heat, serve up and garnish with coriander, chopped cashew nuts and lime juice before serving.