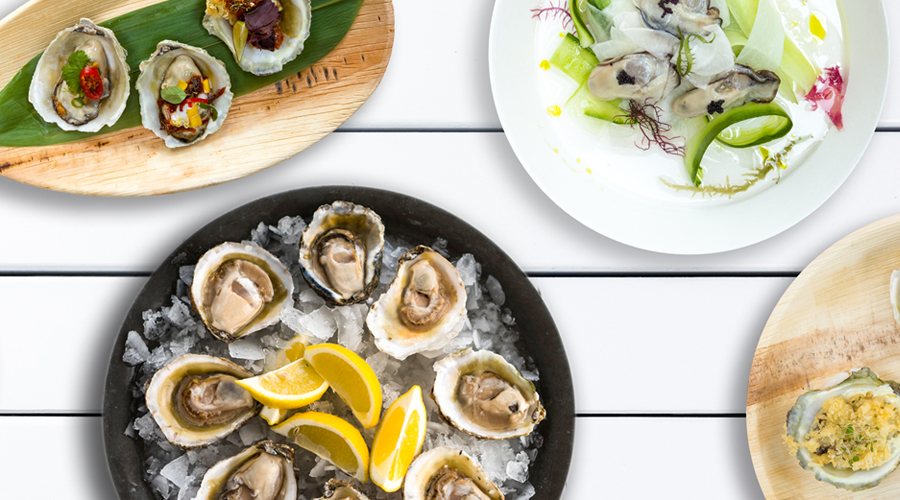 March is officially in full swing and, while we’re not quite ready to say hello to autumn just yet, there is one particular reason why we’re thrilled that the third month of the year is upon us. season is here. The time of the year where the ocean delicacies in all their delicious, refreshing, slurpable glory are in abundance. For those who are partial to a Bluffie or two, we suggest you take a look at this list, for these are the places in Auckland really doing the season justice.

Saint Alice
Saint Alice is overhauling its happy hour for the special season with a deal that we can really sink our teeth into. Until they sell out, the rooftop newcomer will be offering Bluffies for just $1 between the hours of 3pm to 5pm daily.

Ebisu
This year, head chef Fred Wong will be creating his very own, signature condiments, a trio comprising citrusy yuzu mignonette, white ponzu jelly and a refreshing cucumber yuzu sorbet. One dozen of these beauties will set you back $72, while half a dozen will cost $36. Those hoping to have a small taste of each, can indulge in three raw oysters topped with each dressing, alongside either a cup of Sanshimai sake, a crisp glass of Contesse prosecco or a glass of Te Whare Ra Toru white wine for just $30. (One per customer.)

The Wreck
Auckland Fish Market‘s resident watering hole, The Wreck, will be delivering the goods via its oyster-centric take on happy hour. On Thursdays and Fridays from until 6pm, $2 Bluffies will be available with any beverage purchased. (With a limit of two per person.)

Market Galley
Elsewhere at Auckland Fish Market, in Market Galley, the shelled delights will be enveloped in a simple but satisfying secret batter. Not content with just battering them to heavenly new heights, however, the Market Gallery will also be crafting its own oyster dog: battered Bluffies, crisp iceberg lettuce and a drizzling of spicy aioli sauce all encased within a pillowy soft brioche roll.

Azabu at the Auckland Fish Market
For oysters delivered the decadent way, at Azabu’s new Auckland Fish Market outpost you’ll find them cooked tempura style. Each oyster is coated in a light and flakey batter before being served alongside tangy wasabi-infused tartare sauce. But that’s not all. A decadent Bluff oyster served with cucumber daikon pickle, Japanese vinaigrette and coriander, will also be available. Delivering a fusion of exquisite flavours that pay homage to Azabu’s signature style, this is a bite you really won’t want to miss out on.

Azabu Ponsonby
Over at the original restaurant, Ponsonby Road’s Azabu will be serving oysters up deliciously fresh with passionfruit, pickled shallots and zesty leche de Tigre dressing. You’ll find them tempura style here, too, alongside the same wasabi-infused tartare.

Hello Beasty
Asian fusion eatery Hello Beasty will be serving the seafood delicacies two ways – au naturel with Japanese black vinegar and a spritz of lemon, or battered Karaage-style with yuzu-kosho mayonnaise (a creamy Japanese mayo with fermented chilli) at $30 for half and $60 for one dozen.

The Princes Wharf Oyster Festival
There’s no better way to celebrate Bluff oysters than with the yearly festival, and this time around, Euro, Coley & Punch, The Culpeper and The Crab Shack are all stars of the show. For more information on all the happenings, click here.

Ostro
Ostro has our excitement levels peaking with its lip-smacking lunch offer, one which offers a dozen oysters for just $29.95 between the hours of and We suggest you swoop in quick though, because this mollusc-laden lunch deal is available for just five days, from the 5th until the 12th of March.

The Deck at Ostro
In addition to the above, Ostro’s deck area will also be offering the pairing of a bottle of Veuve Clicquot with a dozen oysters for $130 — similarly, between the hours of and $3 bluffies with any beverage with any purchase during Happy Hour. (3pm- 6pm, Monday Friday – limited to 3 oysters per beverage at $3 each.)

Billypot
For those who are craving the delicacies but can’t make it out of the office, Auckland Fish Market’s Billypot has you covered, teaming up with UberEats to deliver Bluffies by the half-dozen straight to your door, for just $30 plus the $5.99 delivery fee. (We suggest you be quick though, because once they’re gone, they’re gone.)

Bluff oyster season has kicked off! These are the best places to get your fix