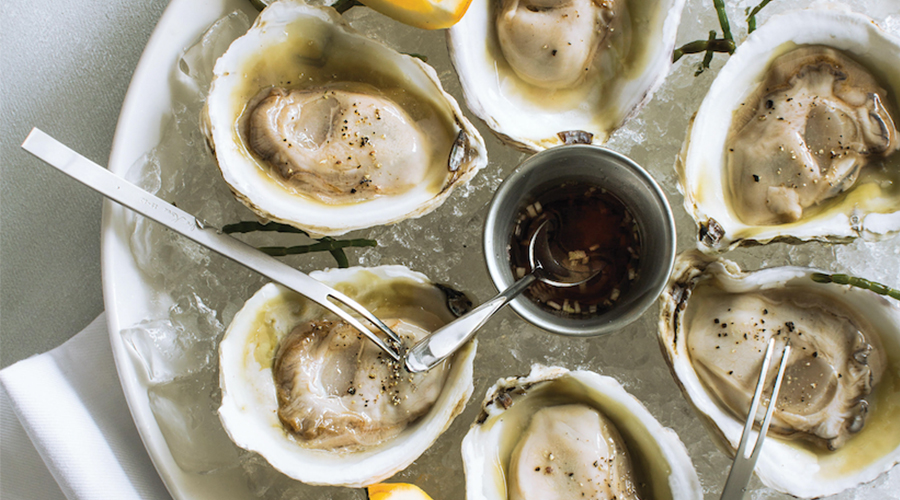 March is officially in full swing and, while we’re not quite ready to say hello to autumn just yet, there is one particular reason why we’re thrilled that the third month of the year is upon us. season is here. The time of the year where the ocean delicacies in all their delicious, refreshing, slurpable glory are in abundance. For those who are partial to a Bluffie or two, we suggest you take a look at this list, for these are the places in Auckland really doing the season justice.

Saint Alice
Last year, the rooftop restaurant became the crowd favourite spot for Bluffies with its happiest of happy hours, when a Bluff would go for just $1 a pop. Although this year’s price is yet to be confirmed, Saint Alice is promising to shuck Bluffs this March.

Dr Rudi’s
Next door to Saint Alice, Dr Rudi’s will also be shucking Bluff oysters and offering a complimentary pint of Rudi’s APA with every dozen for only $45. The perfect starter before transitioning into the pizzas sold by the foot, particularly the pork belly that sees sweet kumara, tender braised pork belly, watercress, red onion and melted mozzarella.

Hello Beasty
Asian fusion eatery Hello Beasty will be serving the seafood delicacies two ways – au naturel with Japanese black vinegar and a spritz of lemon, or battered Karaage-style with yuzu-kosho mayonnaise (a creamy Japanese mayo with fermented chilli) at $30 for half and $60 for one dozen.

Oyster & Chop
With its name and reputation for being home to some of our town’s finest seafood, it comes as no surprise that Oyster & Chop will be shucking Bluffs this season. There will also be a happy hour from 3pm until 6pm, where half a dozen Bluffs go for only $18 and tastes even better and fresher with its waterfront location.

Non Solo Pizza
Parnell’s favourite Italian restaurant, Non Solo Pizza has been treating its diners with two complementary oysters with every Peroni purchase during Aperitivo Hour from Wednesdays to Fridays, 5:30pm until 7:30pm, making it our go-to spot for after-work drinks. However, our friends at NSP are going into Bluff oyster season with full force with a lunchtime special of a dozen for $29.95 special from the 3rd until the 15th of March, 12pm until 5:30pm. For the committed Bluff-fanatics, mark your calendars for Wednesday, 18th March as NSP is hosting a seafood-centric long lunch for $175 per person, showcasing the best of ocean’s bounty as well as freshly shucked bluffies on arrival, as well as either an effervescent Peroni or Aperol Sprtiz. Bookings for both specials are essential.

Ostro
For those who miss out on Ostro’s lip-smacking lunch on Wednesday the 4th, not to worry as Ostro is also offering a special deal of a dozen oysters for just $29.95 between the hours of and Swoop in quick though, because this mollusc-laden lunch deal is available for just five days, from the 3rd until the 15th of March, click here to book.

The Deck at Ostro
Ensuring that nobody misses out on satisfying their Bluff cravings, Ostro’s deck area also has us sorted. The Deck will be offering two bluffies for only $5 with any beverage with any purchase during Happy Hour. (5pm- 7pm, Wednesday to Friday – dependent on availability.)

Seven
Upstairs from Ostro on the seventh floor, Seven is also getting amongst the Bluff oyster season. Boasting a much more casual atmosphere, sit back and immerse yourself into the dozen Bluffs for $29.95 from 12pm until 5:30pm — a limited offer from the 3rd until 15th of March.

Billypot
For those who are craving the delicacies but are low on time and simply can’t commit to a long lunch, Auckland Fish Market’s Billypot has you covered. Freshly shucked to order and takeaway-friendly, you can take these Bluffies wherever you like.

Indulge in Bluff oysters at home with these kitchen essentials

Getting to Know: Charles Williams from Williams Eatery on ceramics and Brussels sprouts

All this sunshine has as inspired by these dreamy