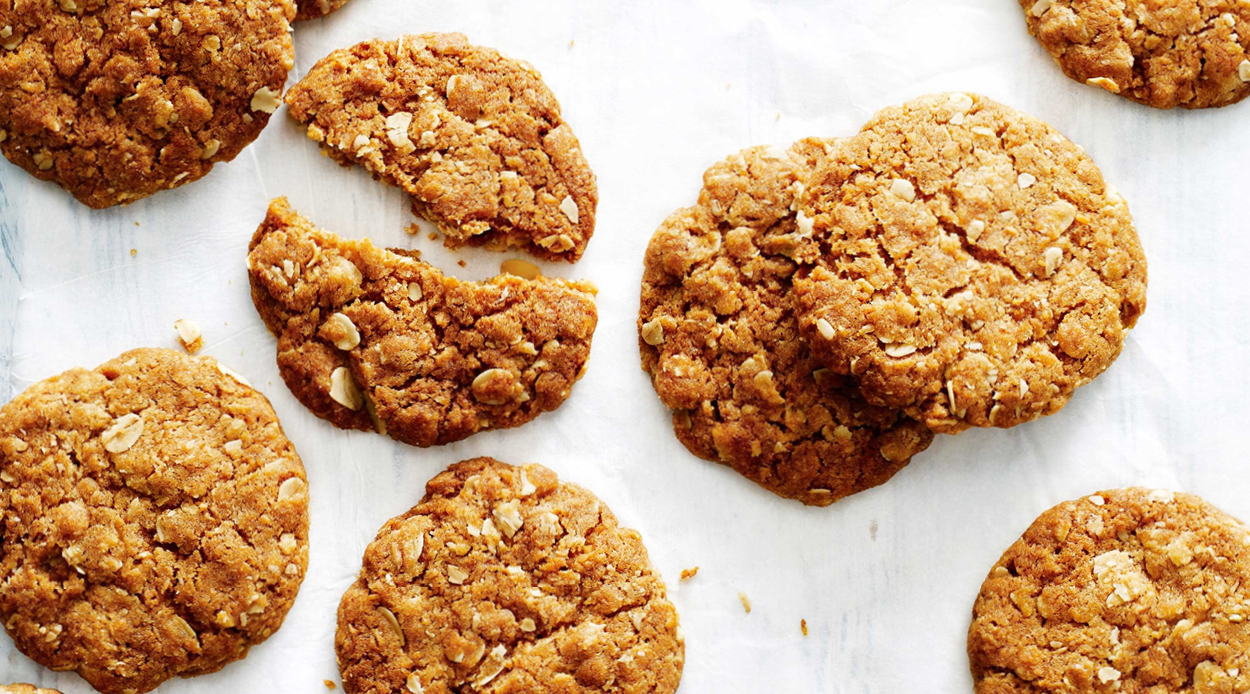 It’s the simple symbolism of the ANZAC biscuit, long associated with the Australian and New Zealand Army Corps (ANZAC) and popularised by the soldiers’ wives who would send them in care packages, that makes it the perfect accompaniment to ANZAC day commemorations. It’s important to note that ANZAC Day is, first and foremost, a day to acknowledge sacrifices that were far bigger than any biscuit could fully represent but it’s a a subtle and simple nod to the past.

This modern ANZAC biscuit recipe is one that we swear by. The resulting morsels are chewy, soft and boast deep, intriguing flavours thanks to the browned butter and peanut butter. You’ll never want to make them any other way.

Method
1. Pre-heat the oven to 180°C, fan-forced and line a baking sheet with baking paper
2. In a medium saucepan, melt your butter and let it simmer until browned. Keep a close eye on this as it can burn quite fast. Take it off the heat and let it cool for 5 minutes.
3. In a large mixing bowl, mix the browned butter into the granulated and brown sugar and mix until fully incorporated.
4. Then add in your vanilla, egg, peanut butter and golden syrup. This may take a while to combine but it should form a creamy consistency.
5. In a separate bowl, mix the dry ingredients together. We recommend sifting them through to avoid lumpy chunks of almond meal.
6. Add the dry ingredients into the large bowl of wet ingredients until it forms a cookie dough texture (slightly stickier than a regular chocolate chip cookie dough).
7. Take an ice-cream scoop and place the balls of dough on the baking tray, approximately 7cm away from each other to leave room for spreading.
8. Pop them in the oven for 12-15 minutes or until golden.
9. Don’t let them go too brown in the oven as they bake more as they set.
10. Enjoy.

The best ways to commemorate ANZAC day this year

Get to know MDC, the forward-thinking champagne that’s here to lighten the mood

Breakfast is ready 🍳 ☕️ 🥐 The only slig

Sunny days like today have us thinking we should b

When working from home looks this good, we’re so

Just in the nick of time! Our latest issue of Deni