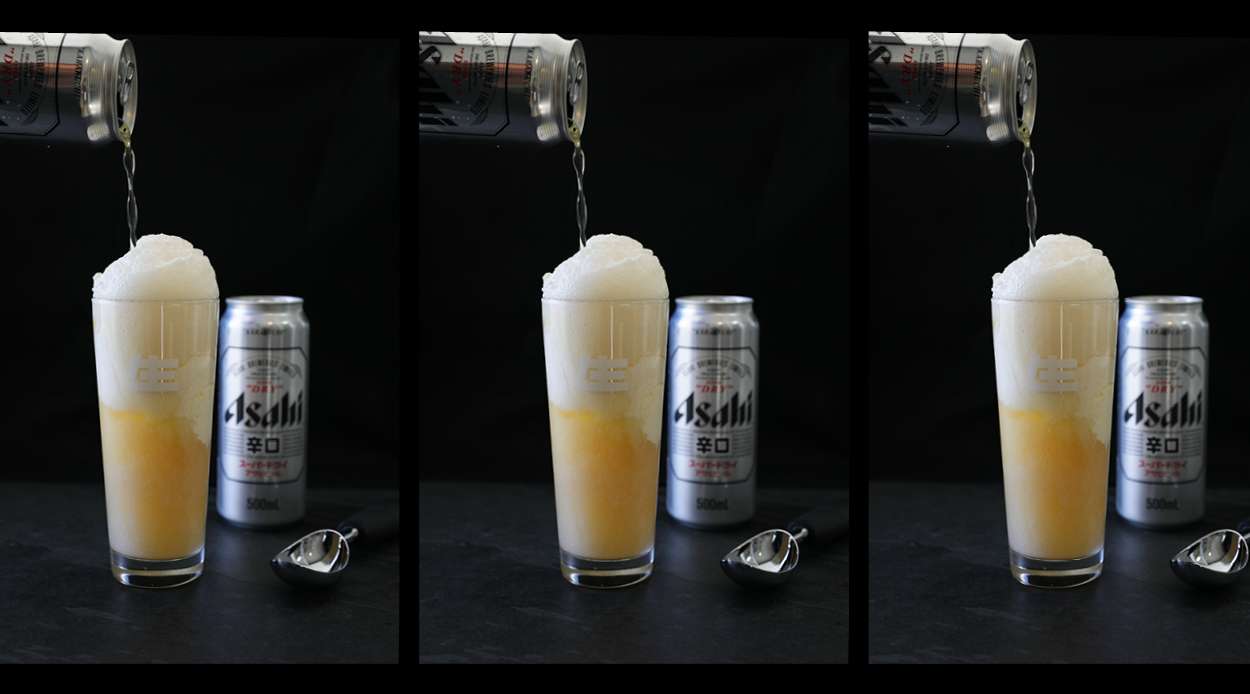 Pure, crisp and refreshing, Japan’s top-selling beer, Asahi Super Dry is the perfect meal accompaniment. But beyond the simple pint, there are a number of surprising ways Asahi can be consumed — and you don’t have to be a beer drinker to enjoy them.

1. Beer float
Put a mature and sophisticated spin on the nostalgic spider by replacing the sugary, carbonated soda with a light, foamy lager. Once poured on top of a generous scoop of vanilla ice-cream, or even better, a swirl of soft serve, the yeasty and malty notes of the Asahi Super Dry balance the sweetness of the dairy. The reaction between the two elements creates a clean, uniform foam around the rim of the pint. The result is pure delight.

2. Asahi beer tempura batter
The qualities we seek in a cold one are almost identical to what we look for in a batter — golden, crisp, light and smooth, so it makes sense to put the two together. To make the perfect batter, combine Asahi Super Dry and tempura flour in a large mixing bowl. The bubbles from the Japanese beer will add a fluffiness to the batter which will emerge from the deep fryer crispy and glistening.

3. Mulled beer
Let it be known that Asahi makes for a marvellous mulled ale. In a saucepan, add Asahi Super Dry, along with a host of warming spices including nutmeg, cinnamon and cloves. As the wafting scents of winter fill your kitchen, add in one egg yolk and a small spoonful of sugar for a heart-warming mug of cosiness.

4. Chocolate beer cake
Meet the unexpected ingredient that can often be the defining factor between a chocolate cake that is good, and one that is great — stout beer. Despite being an often-employed kitchen hack, it can pose a risk if the stout is too bitter, which is where Asahi Black comes in. Offering the perfect middle ground between a light brew and a dark lager, Asahi Black will enhance the cake’s chocolatey flavours while allowing the ideal amount of sweetness to shine through.

5. Beer cheese soup
The combination of beer and cheese is the savoury equivalent of milk and cookies, and is a pairing that works undeniably well. For the ultimate soul-warming dish, combine Asahi Super Dry with a medium to strong melted cheese like Gruyère. Add the concoction of cheese and ale into a blended mixture of sautéed vegetables that have been marinating in chicken broth. This served with a side of salty pretzel bread, is a simple but impressive winter dish you’ll be making all season.