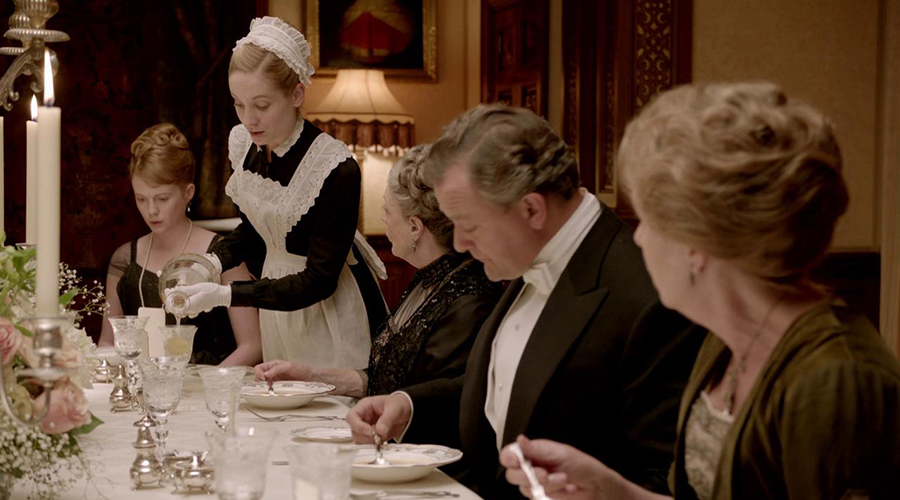 Let the aristocratic Crawley family school you on the impeccable table manners of the post-Edwardian era.

With soirée season upon us, we felt it was timely to brush up on our dining etiquette and be reminded of the utmost decorum to employ for faultless socialising that exudes an air of bygone-era elegance. With this task in mind, who better to look to than the eminently cultured Crawley family?

1. Table Posture
Your back should never touch the chair. One must sit straight and bring the food to your mouth. No matter how crumbly the pastry is, never lean down to the dish. The only exception is when you drink soup – you can gently bow your head ever so slightly.

3. Consumption Pace
Loo breaks are unfortunately not an option. Most dinners will last an average of 2 hours so you will have to drink in moderation to prevent the need to go.

4. No Compliments
You shouldn’t pass comment on the food (because it was cooked by the chef not the Lady of the house), on the way your host is dressed (because it was a given that she looked nice) or décor (it would give away your status if you were not used to fine interiors).

5. Seating Plan
Women dominate at Downton Abbey but traditionally guests would be seated in a boy-girl-boy-girl order. Married couples would be split because it was assumed they spent enough time with each other and engaged couples were sat together so that they could talk in a chaperoned setting.

6. Turning the Table
To not exclude anyone at the table, you are expected to speak to one gentleman next to you. Then, when the main Lady at the table gives a gentle cough, turn to your neighbour on the other side. This was called ‘turning the table’.

7. Suitable Conversation
Never talk about money, work, sex, health, politics or religion on the table. The Dowager is a good regulator of this. Conversation at afternoon tea in particular should be light to go with the light meal.

8. Eat Seasonal
Meals on Downton Abbey consist of seasonal food such as asparagus in August and game in the shooting season. They are big fans of meat which includes pork, fish, beef and lamb. Refer to Mrs. Beeton’s Book of Household Management for hundreds of recipes.

9. What Food Wastage Policy?
Before the ration was implemented during World War II, people weren’t so cautious about food wastage. It was okay to leave food on your plate especially because dinners consisted of seven courses.

11. Parlour Time
If you’re the head lady of the table, once dinner is finished take the women to the parlour for coffees and liquors, so that the men can speak about politics for 20 minutes before they join you.

12. Breakfast Rules
If you’re a married Lady, it is customary to have your breakfast in bed, because you supposedly don’t have to socialise to find a husband. For those at the table, breakfast would be a buffet of kedgeree, toast, kippers.

13. Serve From The Finest
While the staff would drink from clay dishes, upstairs fine bone china was compulsory.

14. After Lunch Snacks Allowed
Traditionally dinner was not served until 8:30 or 9:00pm, so it was normal to get hungry late afternoon. Anna Russell, the Duchess of Bedford invented afternoon tea, the light pre-dinner snack. This consists of sandwiches with no crusts and scones which you should break with your hand, not cut it with a knife. The jam and clotted cream order is personal to you.

15. It’s A Cup Of Tea
Here are the rules: milk should be poured in after the tea; stir the milk in with your spoon in a back and forth motion (12 to 6 o’clock); the spoon should be placed on the saucer behind the cup, and you should never hook your finger around the cup handle. Instead, pinch your index finger and thumb through the loop and rest the base of the handle on your middle finger. If the table is too low, hold the saucer at waist height.

16. Don’t Call It High Tea
During the Downton Abbey era, the name ‘high tea’ referred to an evening snack which the staff ate, because it consisted of a substantial meal of cake and meat and was eaten on a high wooden table. The Americans misinterpreted it as a name for glamour and richness.

17. Hats and Gloves
Hats and gloves are required for all meals before 6pm. When eating, remove your gloves and place them on your lap and the napkin on top.

18. Best Dressed
Wear a tea gown – a low waited dress similar to the one Mary Poppins wears – for afternoon tea and a full evening dress with an up-do for dinner. Men should always wear black or white shoes to let the woman shine. Make sure your maid logs what you wore to guest dinners to prevent any repeated outfits. However, it is perfectly acceptable to repeat outfits in front of the family.

19. Tiara Ban
Only married women can wear tiaras to formal dinners, which is often gifted to them during their wedding. It is used to distinguish the single women in a room.

20. Want More?
It’s not appropriate to ask for more food or drink. Here’s how it’s done. If you want more tea during an afternoon tea, ask the person closest to the teapot if they would like more tea. In reply, they will ask you the same question. Alternatively, if the port decanter doesn’t reach you during after-dinner drinks say, “Lady Mary, do you know the Earl of [insert a town name]? He was a terribly nice chap who would always forget to pass the decanter”. They should get the message.

Make like The Royal Family with this esteemed fragrance collection