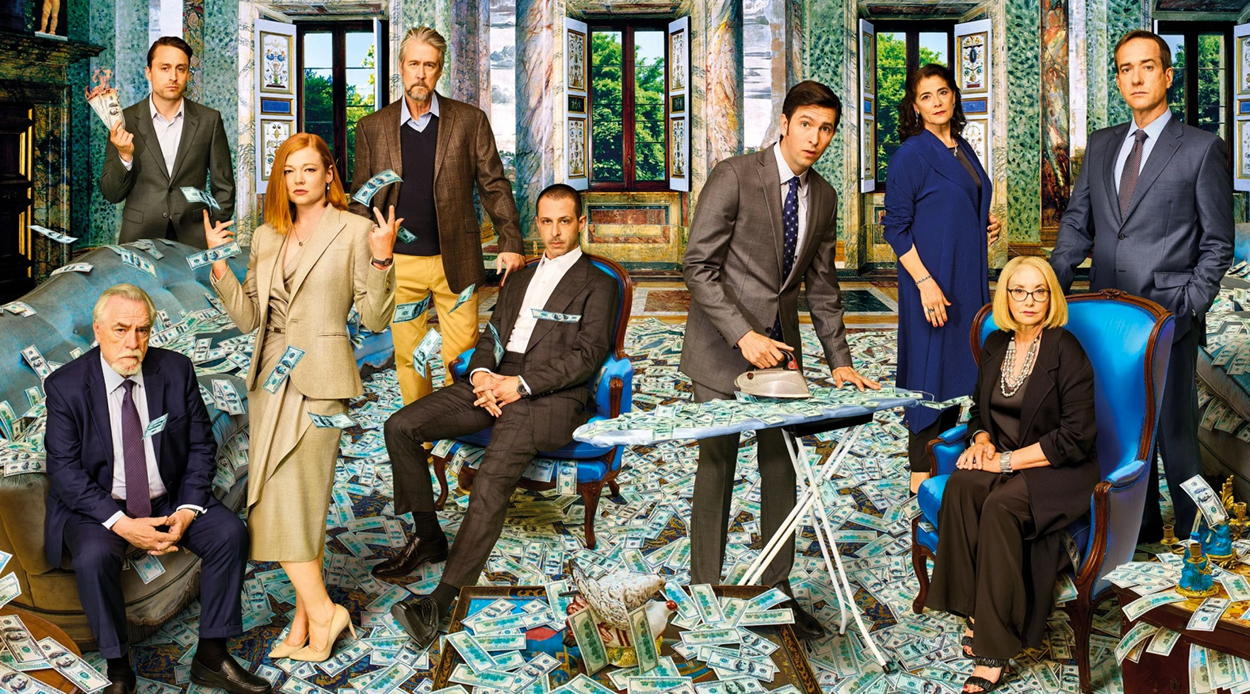 At times like these, it’s comforting to know we have 30-minutes or more of escapism ready and waiting to load when we need it. Look no further than our round-up of the latest and greatest offerings from various streaming services. From mysterious miniseries to comedic crime dramas, these shows will fill the void.

Succession
The third instalment of the Emmy-winning drama series Succession finds the head of the Roy family scrambling to secure familial, political, and financial alliances for his global media empire. The addictive nine-episode season promises plenty of tension and plot twists as the family members try to outplay each other, and the TV season outdoes itself.

The Flight Attendant
Harking back to the golden age of travel (pre-2020), The Flight Attendant is a genre-defying show that is taking off. Kaley Cuoco (Big Bang Theory) is finally given a lead role with the range she deserves, as an alcoholic flight attendant who wakes up next to her first class dream date, discovers he has been murdered, and must piece together what’s happened before she is caught by the FBI, or more sinister forces. With Zosia Mamet (Girls) as her best friend and hard-case lawyer, it’s a terrifically turbulent crime drama, pieced together with well-timed humour. Watch on Neon

Nine Perfect Strangers
Another miniseries starring Nicole Kidman (fast becoming the genre’s most prolific practitioner), Nine Perfect Strangers is adapted from a novel of the same name and follows a wellness retreat that goes horribly wrong. Promising a similarly captivating and dark drama to Big Little Lies (the novel was penned by the same author, after all) this series has us eagerly awaiting its weekly episodes. Watch on Amazon Prime

The Chair
Set in the scrambling English Department of the historic Pembroke University, The Chair is a six-part series that sees Sandra Oh (Killing Eve, All-Round-Amazing-Actor) become the first female Chair. Charismatic chaos ensues as she tries to lead her colleagues into the 21st century, without them being cancelled. A special mention goes to the legendary Holland Taylor (Legally Blonde, Hollywood), whose love of Chaucer and casual flirting could carry the show alone. Watch on Netflix

Only Murders in the Building
Taking the mickey out of true crime lovers, Only Murderers in the Building sees an unlikely trio — Steve Martin, Martin Short and Selena Gomez’s characters — come together to record a podcast, and solve a crime, when someone is murdered in their Upper East Side New York apartment building. The ten-part black comedy series borrows from a wide-ranging whodunnit genre — from Agatha Christie to Nancy Drew and Serial — to keep us guessing, and smirking, until the bitter, brilliant end. Watch on Disney+

Gossip Girl
Listen up, Upper East Siders, Gossip Girl is back with a new season that is sure to make style stars of its fresh-faced new cast. This time, we now know who GG is from the outset — Tavi Gevinson, who first came to our attention with her real life blog Style Rookie. While it still follows a group of ridiculously rich kids, alumni of Serena, Chuck and Blair, the reboot has been updated for our current cultural climate with the same over-the-top outfits and storylines we know and love. Watch on Neon

The Panthers
The Panthers is a six-part series based on the true story of The Polynesian Panthers. It stars newcomer Dimitrius Schuster-Koloamatangi as Polynesian Panther Party co-founder Will ‘Ilolahia, as well as a plethora of local talent — both established and up-and-coming. The highly-anticipated drama was announced as the first New Zealand television series to show at the Toronto International Film Festival, and is now available to stream online. Watch on TVNZ OnDemand

Barry
Bill Hader (Saturday Night Live, Superbad) stars in this HBO dark comedy, which has largely flown under the mainstream radar despite rave reviews and hefty wins on the Hollywood awards circuit. Barry, a low-rent hitman, ends up getting bitten by the acting bug while visiting Los Angeles on a criminal sojourn. What ensues is an addictive, highly-entertaining examination of the dark side of human nature, complete with a brilliant cast. The best part? There are two seasons available to binge. Watch on Neon

War & Peace
New to Neon, the BBC’s 2016 adaptation of War & Peace takes on the daunting task of translating one of the world’s most famous literary works into a six-part mini-series. Whether you’re a fan of Tolstoy’s epic or you just want to get acquainted with the story without having to commit to 1200 pages, this period piece is sure to do the trick. Watch on Neon

Dr. Death
Off the back of the hit podcast of the same name, crime drama Dr. Death brings to life the terrifying true story of Dr. Christopher Duntsch — a charismatic, problematic, and ultimately criminal neurosurgeon. With excellent performances from Joshua Jackson, Alec Baldwin and Christian Slater, this eight-episode mini-series will have you hooked. Watch on TVNZ OnDemand

The Pursuit of Love
Nancy Mitford’s most famous novel has been a bestseller since it was published in 1945 and this year’s screen adaptation is absolutely delightful in its own right. In the bombastically colourful three-part miniseries, we are introduced to the upper class English Radlett family through the eyes of their cousin Fanny, with a particular focus on Linda Radlett — played with gusto by Lily James. Eccentric, comedic and tragic in equal measure, The Pursuit of Love is about “growing up and falling in love among the privileged and eccentric”, and is a feast for the eyes. Watch on Amazon Prime

My Unorthodox Life
Just over 10 years ago, Julia Haart fled a “fundamentalist” orthodox Jewish community in Monsey to become a self-made New York woman. Ushering in a new era for reality TV, My Unorthodox Life is as much about Haart’s fabulous new life as the CEO of the Elite World Group modelling agency, as it is about her family coming to terms with their new views on religion and values. Watch on Netflix

The White Lotus
Following a group of high-flying holidaymakers at a luxurious Hawaiian island resort, The White Lotus is a social satire that finds what lies beneath on a picture-perfect vacation. With nuanced character development over the six episodes and a stellar cast including Jennifer Coolidge, Alexandra Daddario, Connie Britton, Molly Shannon and Sydney Sweeney — it’s an entrancing watch. Watch on Neon

Cooking with Paris
The first stop on Paris Hilton’s captivating comeback tour is her new cooking show on Netflix. Don’t expect to pick up any expert cooking tips, but you may get some ideas on how to swan through the supermarket in a gown, or make small talk with celebrity guests (including Hilton’s former assistant Kim Kardashian). Watch on Netflix

Luxe Listing Sydney
With its breathtaking coastal properties, Sydney is one of the most ruthless multi-million dollar real estate markets in the world. A trio of Australia’s top agents let us in on their demanding days at work, and personal life, as they overcome fierce competition and ergo egos. Watch on Amazon Prime

How to Become a Tyrant
How to Become a Tyrant takes a page out of the playbook for absolute power to decode how some of the most ‘successful’ dictators managed to change the course of history. The sardonic docuseries follows the likes of Adolf Hitler, Saddam Hussein and Idi Amin to show how their tactics, including fear-mongering and manipulating the media, fooled millions. Watch on Netflix

Mr. Corman
If you were wondering what Joseph Gordon-Levitt was doing dialling into The Late Show with Jimmy Fallon from New Zealand last year, you can now see what he’s been up to. The Inception and 10 Things I Hate About You actor has written, directed and starred in Mr. Corman — a dramedy following a fifth-grade school teacher as he looks to find happiness and meaning in the world around him. Watch on Apple TV+

Obama: In Pursuit of a More Perfect Union
This three-part docuseries guided by leading political experts looks at how Barack Obama became the 44th President — and the first African American President — of the United States. From being brought up by a single mother and navigating his biracial identity while working in the community to becoming Illinois State Senator and winning the seat in the oval office, it looks at the intertwining nature of race and politics, and how a ‘more perfect union’ was reached. Watch on Neon