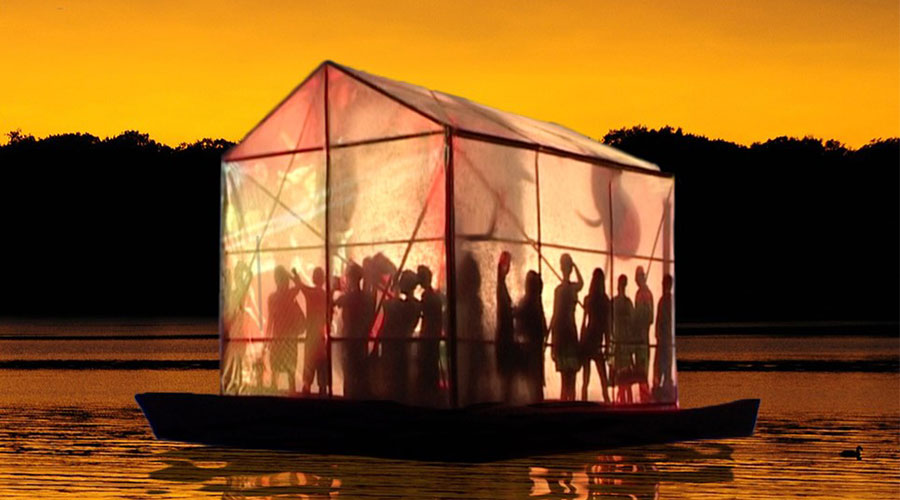 This intimate on-water experience is merely another example of Auckland's awe-inspiring theatre scene.

Auckland is making a name for itself thanks to its increasingly unconventional theatre offering. Last year, we welcomed a world-first replica of Shakespeare’s second Globe — which has returned for a 2017 season, might we add — and now, we have New Zealand’s first ever floating theatre.

It should come as no surprise that the concept has been spearheaded by creative director and designer of Winning Productions, Stephen Bain. Bain has built a career in constructing creative performance spaces and site-specific productions. This one, in particular, has captured our attention and imagination.

Set on the waters of Auckland’s Viaduct Basin, The Floating Theatre will be an immersive multimedia experience of puppetry, projections and stagecraft that can be viewed from either inside — the theatre has space enough for 30 people — or away from the floating barge. The uniquely-devised mobile structure is clad in fabric, allowing it to glow at night, projecting the shadows of performers and the audience dancing across its walls.

Part mime, part surrealist comedy, The Floating Theatre will portray a story of fantasy and adventure with a score by Jeff Henderson. With the tinkling of music and dancing of lights, the floating theatre will succeed in bringing the stage to the sea for an intimate outdoor spectacle like we’ve never seen before.

The Floating Theatre will be running from 8th-11th March (floating just beside the Wynyard Bridge). Click here to get your tickets before it’s too late.

Inspiring and aesthetically pleasing, these new coffee table books add a stylish spark to your home