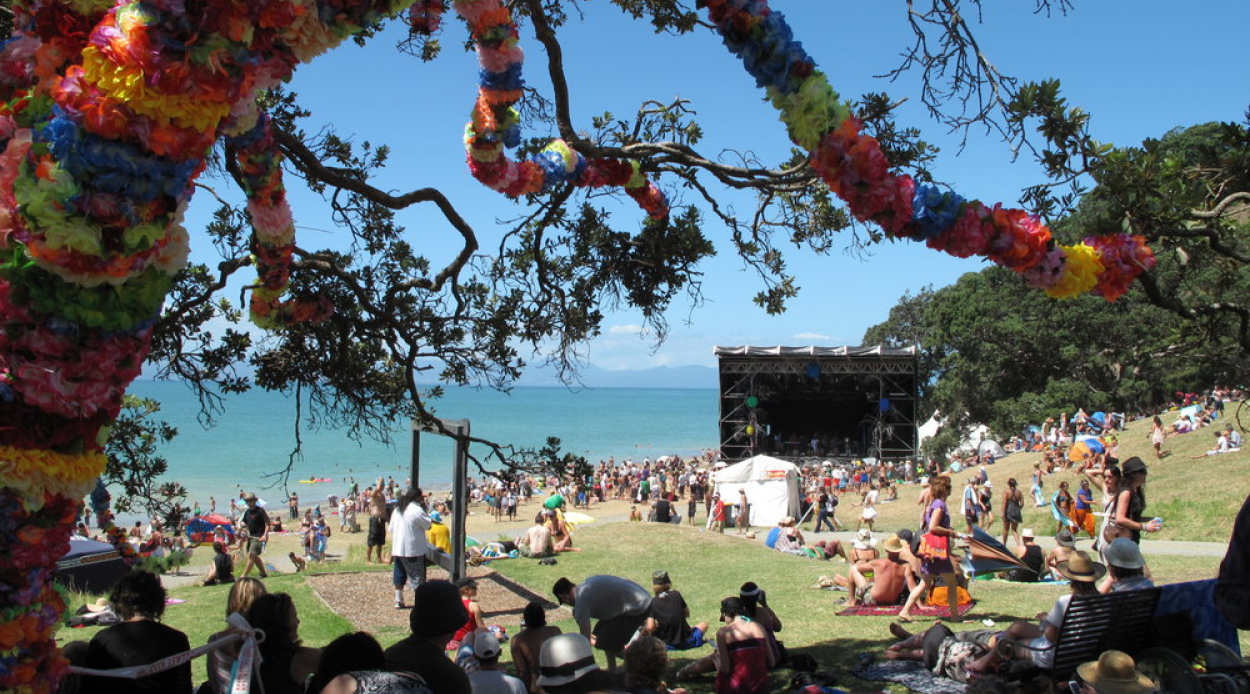 It’s in our antipodean genome to spend summer on the festival circuit in the company of like-minded Peter Pans. But important questions must be asked: Can you take the kids? Is there running water? And will you stick out like Donald Trump at Coachella?

NORTHERN BASS
Where: Mangawhai, Northland
When: 29th-31st December 2017
Don’t let the marathon prospect of three straight days of liquid drum and bass deter you, the secret to nailing this festival is to go for one day only and to go late (so as not to realise who’s there). Any longer and you might not ever return home. With a whimsical set-up that sees an artful erection of teepee tents and a fairy-lit forest, Northern Bass is known to pull in a dynamic line-up, which this year includes acclaimed English grime artist, Stormzy.

RHYTHM & VINES
Where: Waiohika Estate, Gisborne
When: 29th-31st December 2017
Fifteen years of putting high-school graduates under severe emotional distress have seen this world-class extravaganza experience intense highs and lows. Yet the punters just can’t seem to stay away. Currently enjoying a second-wind amongst R&V veterans, it’s consistently decent line-up — Mura Masa, Sub-Focus and SchoolBoyQ are all playing this year — means that getting herded in and out like sheep to the drenching station is worth it after all.

RHYTHM & ALPS
Where: Wanaka
When: 29th-31st December 2017
If you’re an undercover sadist, partial to hypothermic conditions, we highly recommend this festival equivalent of The Hunger Games. VIP tickets are often difficult to come by, as is transport home. But don’t worry, the staff keep emergency blankets by the hundreds, handing them out to the scantily clad crowds as they combat the sub-zero temperatures. Not to be put off, this year’s performers include the ever-popular Fat Freddy’s Drop, Little Dragon and Tash Sultana for what is sure to be a good time.

WONDERGARDEN
Where: Silo Park, Auckland
When: 31st December 2017
Only two years old and already managing to lock down globally acclaimed names like Unknown Mortal Orchestra, Chelsea Jane and Leisure, this is one Auckland festival where you can strap on your spawn and soak up the salubrious vibes. With a carefully curated line-up of street eats and plenty of space to take in the exceptional entertainment on offer, this is chillsville at its finest, all in the proximate comfort of Auckland’s Silo Park.

SOUNDSPLASH
Where: Raglan
When: 19th-21st January 2018
Following 2017’s sold out event, this Raglan festival will again bring the heat for its second year running. Having announced a covetable three-day line-up of international and local talent, Shapeshifter will lead the charge, backed up by Perth duo Slumberjack and Melbourne’s DUB FX. Meanwhile, Katchafire will bring an essential dose of Aotearoa reggae to the table. Soundsplash favourites Ocean Alley will also return to play their only all-ages show in NZ this summer.

ST JEROME’S LANEWAY FESTIVAL
Where: Albert Park
When: Monday, 29th January 2018
Returning for the second year to its new Auckland home in Albert Park, the ever-popular one-day festival won’t disappoint with a line-up that covers off all the bases. The beautifully curated amalgamation includes ‘modern poet and consummate entertainer’ Mac DeMarco as well as our LA obsession, Anderson .Paak alongside The Free Nationals. With our very own Aldous Harding, Baynk, and the UK’s incomparable Bonobo also in the ranks, this year is set to be another scorcher.

COASTELLA
Where: Paraparaumu
When: 17th February 2018
Like your uncle’s 60th birthday party but with a better DJ, this two-year-old Kapiti Coast get-together is one to please all ages. In the two years it has existed, it has overcome its somewhat underwhelming locale, the Southwards Car Museum Grounds in ‘Paraparam’, to harness the region’s thoroughly wholesome vibes. If you’re thinking about getting a little too loose, however, think again. This one is all about swaying to indie music with craft beer in hand.

SPLORE
Where: Tapapakanga Regional Park
When: 23rd-25th February 2018
Evolving from its underground ‘salt of the earth’ status to a modern day Glastonbury by-the-sea, at Splore you can expect the unexpected. Progressive parents might take their kids for early induction into festival life while others do so for educational purposes (the effect of overindulging in psychedelics — which will be in abundance). However, most of the crowd will be preoccupied with rolling around on the beach, swimming from boat to boat in the bay, and spending their hard-earned cash on flower crowns — the new dreamcatchers.

AUCKLAND CITY LIMITS
Where: Western Springs Park, Auckland
When: 3rd March
Grace Jones, Phoenix, Beck, Peking Duk, Future, Car Seat Headrest — need we list more?! After debuting two years ago, Auckland’s newest festival has secured its second-ever date with nothing less than an incredible line-up. This will arguably be the festival of summer.

WOMAD
Where: New Plymouth
When: 16th-18th March 2018
It’s a common misconception that WOMAD is the festival where people in the throes of a midlife crisis go to find themselves through crafts, jazz music and people in top hats. The big-ticket event draws in some of the world’s best and most far-reaching folk and jazz music acts, which this year includes the incredible Kamasi Washington. Be prepared to take out a mortgage to pay for all the vegan food you will consume though — you’ll need all the sustenance you can get for this mash-up of Semi Permanent meets World of Wearable Art.

HOMEGROWN
Where: Wellington Waterfront
When: 7th April 2018
This is a great festival celebrating the panoply of New Zealand musical talent. If it weren’t for an aversion to Jim Beam and a highly-reactive cannabis allergy, we’d be there with bells on. In all seriousness, Homegrown is one hell of a party, with five stages and a hoard of boisterous Wellingtonians dressed in the merch of festivals passed, ready to get stuck in. The windy city has proven time and time again to turn it on for the ‘next best thing’ since Big Day Out’s demise (RIP) and with local talent to boot.

Staying in the city over Christmas? These are the 9 events you need to attend