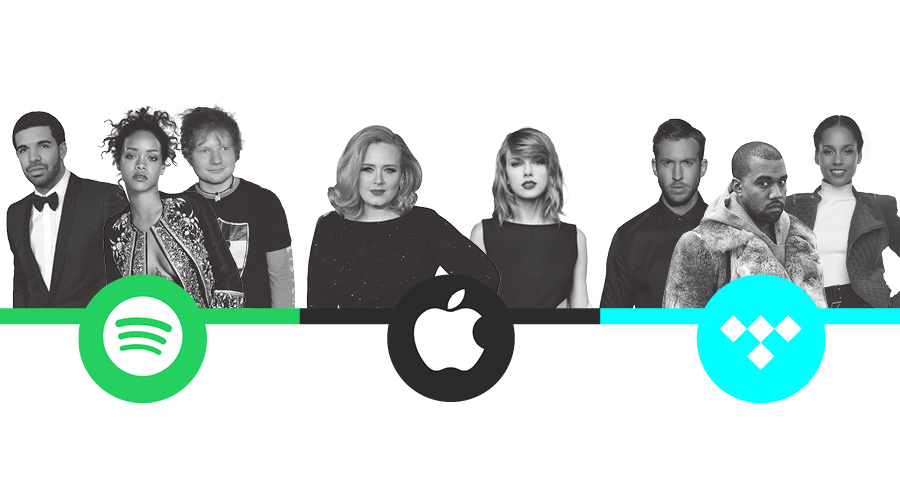 With the concept of being able to listen to any one artist using a single platform a thing of the past, we break it down to see who’s winning the streaming war.

Based in Stockholm, the great thing about Spotify is that they really are trying to champion better access to music from the user’s perspective. The company’s CEO, Daniel Ek, in response to Taylor Swift’s blog post that griped about how Spotify doesn’t pay artists enough, explained how the breakthrough streaming service has basically paved the way for music that was otherwise being pirated. Now artists are being paid between 5-10 cents per stream. It’s music for the people; a platform designed to ‘help fans find music and help artists connect with fans through a platform that protects them from piracy and pays them for their amazing work’. Aside from missing a few crucial artists from their catalogue due to Swift-like stand- offs, and arguably being a little difficult to navigate, we’re generally pretty satisfied with Spotify.

Originally offering a generous free three month premium trial, the streaming service all but flew under the radar after its launch last year, apart from when Miss Swift was once again at the centre of a bout of hard-hitting penmanship that brought Apple Music to its knees and prompted a complete one-eighty. Now there’s no free tier — a turn away from their initial stance which was to not compensate artists at all during the free trial period. Aside from their ability to appease artists, we’re fans of Apple Music’s clean format — not that we would expect anything less from the minimalist tech giant. Their catalogue is also hot on the heels of Spotify, making it a fair rival.

The company got off to a rocky start under Jay Z’s direction with dismal subscription levels and Bloomberg Business calling it a “complete disaster”. But when you have the world’s leading female artist as your spouse and a bevy of friends who count themselves as music royalty promising to offer exclusives, the #TidalforAll bandwagon doesn’t look so bad after all. Kanye West’s latest album The Life of Pablo catapulted Tidal into the ranks of the ‘most downloaded’ in the App Store, and along with its favourable reputation for paying the highest royalties to artists, there seems to be hope for the service. However, with its hefty US$20 monthly subscription fee, as well as numerous reported download issues, we’re inclined to think that perhaps Tidal has become one of Jay’s 99 problems.