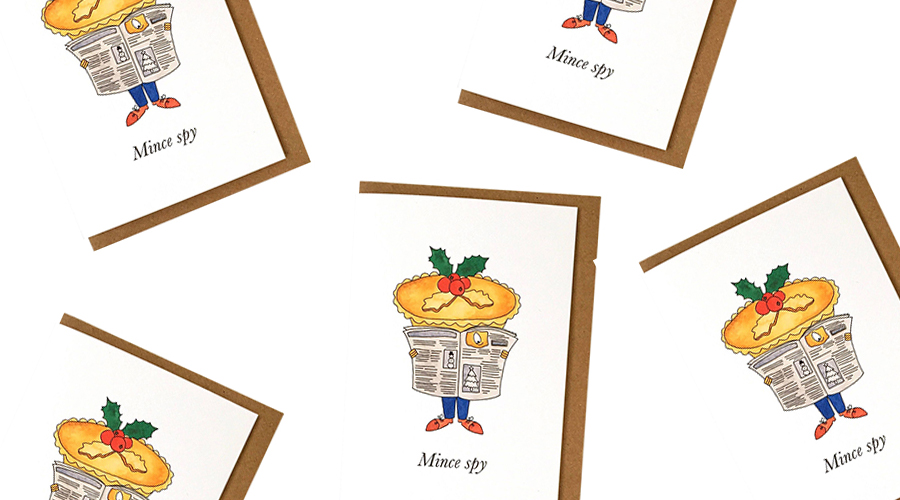 Christmas is, unequivocally, my favourite time of the year. For someone who has more festive spirit than Buddy The Elf on ecstasy, the anticipation of the holiday season is something that rivals nothing else, not even birthdays, with the big event being a veritable fusion of delights. But as the years slide on by, I’ve started to realise I’m part of a swiftly diminishing, atrocious jumper-wearing, merry carol-singing, festive-spirited minority. I’m yet to figure out whether the culprit is the sobering takeover of Generation Boring or the rise of technology, but my treasured seasonal traditions are vanishing quicker than Michael Bublé’s social reach come January 1st. The tradition that’s at the top of the list? Christmas cards, and I think it’s one we would do well to rediscover.

When I conjure up memories of Christmas cards throughout my adolescence, I recall them being regarded as seriously hot property. I remember, with a begrudging father and his wallet in tow, shopping excitedly on a school evening, searching for a set of showstoppers that would ignite a sense of awe upon envelope severance — often emblazoned with cute animals and most definitely dripping with an obnoxious quantity of glitter — before delivering them, smugly, to my fellow classmates the next day. The cards amassed were proudly exhibited like badges of tinsel-topped honour, and the evening spent looping handwriting into charming messages was an experience more savoured than the last bite of the year’s final mince pie.

And this is just as a child. Inside Christmas cards sent by grown-ups lies the annual opportunity to truly blow one’s own trumpet. Many were sent with the latest, Xmas-themed family portrait enclosed — cue Grandma tiddly on sherry and the family dog squeezed into a humiliating Santa outfit — and nearly all included long-winded messages describing the year’s accomplishments. Mentions of how young Sally, at just 10 years old, had recently been awarded a blue ribbon for participating in a Lewis Eady wind chimes competition, and how cousin Christine’s snotty toddler had created finger paintings so exquisite they’d made the fridge not once, but twice in the past month, would bolster the informative ramblings.

Fast forward a few years and the only realm in which Christmas cards still flourish is the superannuated splinter group. My nana, a household name among her village clan, receives more cards in one Christmas than I do mail in a year, snaking them around her rustic English cottage on an unfurling piece of never-ending string like a prized museum exposition. While her list of recipients drops a few digits each year, she still approaches the task with pride, purpose and vigour, filling bauble-playing, kitten-adorned cards with reports on her darling granddaughter’s exploits down under, a flurry of comments regarding her bad back and a mention or two on how the youngest in the family seems to grow every time she sees them.

As with many things that the elderly cling dearly to, especially those that involve pen and paper, it’s clear that the demise of the Christmas card is attributed to the technological onslaught. Why send a sentimental, hand-written card through the post when you can plaster your face onto an animated elf’s body, force it to gyrate mirthfully to ‘Jingle Bell Rock’ and send that, within seconds, instead? The tangible has been replaced with business-template seasonal greetings emails, Snapchats containing turkey leg-devouring Bitmojis and Santa-laden iMessages — all as empty as a naughty kid’s stocking. The instantaneous nature of the modern world is dominating, causing our age-old traditions to crumble in the process.

Not only has our love for technology birthed an entirely new meaning to Seasons Greetings, but our economically conscious mindsets have left us afraid to be frivolous, even at Christmas. A postage stamp nowadays comes in at a minimum of $2.40. Filling out a box of twenty cards and sending them away results in nearly 50 smackeroonies whittled away on some folded paper. And while the price of postage is enough to put anyone off festive cheer, I don’t think it should result in the abolishment of the card entirely. Instead, I propose we make a cull. There’s no need to send cards each year to your grouchy old GP, Susan who runs the nearby dairy or your neighbour’s cat, as cute as he may be — hand-selecting the very nearest and dearest from your circle instead is the approach we should be taking.

After all, there’s nothing like that first twinkle of glitter through the opening, or the guessing game of who it could possibly be from. A hand-written card not only makes us feel incredibly cared about, it also serves as the ultimate surprise and a lifetime keepsake. Now that’s something that can’t be replaced with a Macaulay Culkin GIF.

As with tacky jumpers, hearty Christmas carolling and morning stocking opening, the endangered art of the card is something which we would do well to protect. For how fallen would we be if, five years from now, all that remains in terms of festive cheer is a “Merry Crimbo X” text from the people we care most about? As for me, I’ll still be sending the physical counterparts each year. In part because I want to retain that quality seasonal moment, but also because I know just how much my family and friends will appreciate a handwritten piece of me that has travelled over the seas and fallen through their wreath-adorned front door in England. My nana, of course, is the first on my list.

Hosting Christmas this year? These are the essentials you need for the big day